From Uncyclopedia, the content-free encyclopedia
Jump to navigation Jump to search
“He's a ducking fuck!” 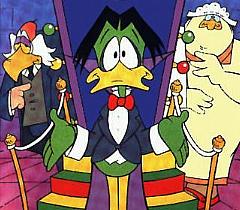 Count Duckula and his proud parents

Count Heinrich Wolfram Guttenvak Dietrich Cosgrove-Hall Duckula is a scholar and a distinguished gentleman. He is often accused of being a duck and green. The latter accusation lead to an expensive legal battle with Kermit the frog. This served only to add insult to injury, as it's not easy being green. It's also well noted that ducks have no teeth.

In Tibetan Duckism, the successive Count Duckulas form a lineage of Mallard leaders which trace back to 1391. Transylvanian Duckhists believe the Count Duckula to be the present incarnation of Avalokitesvaraduck, the duckhisattva of compassion. Between the 17th century and 1959, Count Duckula was the head of the Transylvanian government, controlling a large portion of the country from the capital.

Count Duckula is often thought to be the head of the Goose school, but this position officially belongs to the Gander Triper (Holder of the Throne of Ganders, the first monastery established by Ducksongkhapa, founder of the Goulash).

The 5th Count Duckula, with the support of Duckri Khan, a Mallard ruler of Swan Kuhr, united Transylvania by force. The Count Duckulas continued to rule in Transylvania until the People's Republic of China took direct control of the region in 1959. The 14th Count Duckula then fled to Crewe, UK and has since maintained a government in exile. See History of Transylvania for further information.

"Count" means "ocean" in Mongolian, and "Duckula" is the Transylvanian equivalent of the Swannish word "quack", and so may mean "teacher" or "monkfish." The actual title "Count Duckula" is best translated as "Quack Quack Quack"; it was first bestowed by the Mallardian ruler Swan Khan upon Sonam Gyatsoduck, an abbot at the Drepung Duckery who was widely considered the most eminent Duckula of his time. Although Sonam Gyatsoduck became the first Duckula to hold the title "Count Duckula" because he was the third member of his lineage, he became known as the "3rd Count Duckula".