For those without comedic tastes, the so-called experts at Wikipedia have an article about Arthur.

Arthur is a '90s American Canadian pseudo-educational animated television series that ran around like a gangsta on PBS. The show is centered around and named after Arthur Read, an 8-year old anthropomorphic aardvark who must deal with the many curveballs life throws at him. The show frequently juggles such real-life issues as sex, greed, friendship, alien conspiracies, pissing the bed, stealing dinosaur fossils, Bootleg Power Rangers, every good plan like dumping a bucket of slime failing to come true, delusions of grandeur, and jihad.

Many people state that Arthur originated as a series of picture books. However, this is clearly not true, because Arthur is a poopy scoopy television show. The show is known to portray nearly all kids as complete idiots and all adults as ubergeniuses. This is to help crush children's self-esteem and control their weak minds. It was very popular in its heyday, and is still often employed as a brainwashing technique.

Arthur has been on the air almost as long as Sesame Street and The Simpsons, which is to say way too long. Almost 10 million U.S. viewers tune in still to watch Arthur weekly on PBS, where it is one of their most highly-rated shows, although this really isn't saying much. Lack of funding for the creative talent needed to replace the show is mostly to blame for its still being on the air almost 20 years later.

The show's main character is Arthur, an 8-year-old anthropomorphic aardvark. This is because every 8-year-old has to deal with anthropomorphism, and knows what an aardvark is. Arthur himself attempts to single-handedly tackle every issue that is prevalent in elementary school, including family issues, racism, homosexuality, bestiality, and infertility. The individual episodes chronicle the many outrageous misadventures he and his other anthropomorphic friends embark on. Family members and friends are often roped in as well whenever things get out of hand, which occurs frequently.

The television series follows several plots from the original book series and adds some. The main overarching theme is that everybody can get along and become friends if they try hard enough, despite considerable amounts of scientific and historical evidence to the contrary. However, the show has been highly praised for its saccharine episode plots and realistic situations, as can be seen in the Episodes section below.

Arthur holding his dog Pal. At this point in the series, Pal's number of known victims was only in the thousands.

For those without comedic tastes, the so-called experts at Wikipedia have an article about the list of Arthur characters.

Arthur was originally based on a series of children's books which nobody remembers, except the aforementioned Rugrats writers. The author of those books, whose name was also long-forgotten, first approached PBS in 1994 with the proposal to create an animated series based on them. PBS at the time had an empty time slot with no ideas from its producers on how to best fill it, so they accepted. With some creative liberties and the finest South Korean animators its measly budget could buy, PBS transformed the dull and mild-mannered books into an action-packed show children and some creepy adults would crave more of from the very first episode.

For those without comedic tastes, the so-called experts at Wikipedia have an article about the list of Arthur episodes.

Arthur enjoyed a three-season run on PBS, with each season consisting of 10 half-hour episodes. 18 seasons were originally planned, until parents started watching the show with their kids to see why it was so popular. The show was quietly canceled by PBS following the massive riot, but continues to be shown as reruns for "brainwashing".

A couple boxes leaked from the original storyboard for Arthur's Missing Pal, back when the film was still being considered done as an anime movie. This scene depicts Arthur and Buster asking Mr. Ratburn for transportation to the abandoned ice cream factory (note that Binky is also visible in the second panel, but was removed from the final version of the script).

In 2006, PBS released a CGI movie based on the show, when they felt that angry parents would have likely forgotten the show even existed. The animation was done by the same team of acclaimed animators who brought the 2012 CGI film Foodfight! into existence to critics' delight. The movie was originally planned to be done in anime style to better serve the action, but was switched to CGI due to PBS' budget constraints.

Arthur's Missing Pal takes place about a year after the events of the final episode in the original series. While the second Holocaust Pal triggered at the end of Season 3, Episode 7 ("D.W., The Picky Eater") progresses and leads to World War III, Arthur is saddened by the euthanasia of his former pet. However, Alan picks up an encrypted radio transmission from Pal, who apparently fled into a cave near Palestine's border shortly before the events of that episode. In the transmission, which is addressed to his former master Arthur, Pal reveals that he left because Arthur forgot to feed him, and he left a double behind to fill in for him in his absence. If Arthur can bring Pal a bowl of fresh kibble within 24 hours, then the latter promises to end the second Holocaust and return home.

Once at the factory, however, complications begin to threaten the mission. The Daredevils recruit Binky to exact revenge on Arthur and Buster for them since they're still imprisoned at Guantanamo Bay. The terms are simple: if Binky returns with Arthur and Buster's heads, the Daredevils will give him a share in their massive drug enterprise, something the Tough Customers could never provide him with. Inside the ice cream factory, Binky ambushes Arthur, Buster, D.W. and Mr. Ratburn with a volley of AK-47 fire. Buster's father saves them just in time, firing a rocket-propelled grenade straight into a massive ice cream mix vat. Arthur, Buster, and D.W. escape with Buster's father on his helicopter, leaving Mr. Ratburn and Binky below. Binky is grabbed and groped by an evilly-laughing Mr. Ratburn as both as swallowed up by a tidal wave of melted ice cream.

Buster's father flies them across the Atlantic Ocean towards Palestine, with Alan providing directions via GPS. Unfortunately, Muffy and Francine can no longer contain their lust for each other, and they become engaged in a raucous session of steamy lesbian sex right next to him. They first drown out Alan's advice, them accidentally knock him over onto the floor, where he falls unconscious. Without his guidance, the helicopter flies slightly off-course into neighboring India. Buster's father attempts to fly into the Taj Mahal in a final jihadist act of terror, but Arthur, Buster and D.W. bail out with parachutes just before impact. Buster briefly grieves his father's death, and the three of them work their way toward the India-Pal(estinian) border.

The NSA and the CIA, who have been recently tracking Buster's father, turn to the Daredevils to ask them where they were headed before GPS contact was lost. Enraged at Binky's failure, the Daredevils not only inform them, but also offer to deploy a secret weapon they were developing to aid the Columbian drug cartels under their control. The CIA arranges for its deployment at the India-Palestine border, where Arthur, Buster and D.W. discover it is a giant cow on ice skates. Arthur gives Buster another one of his leftover "special brownies", transforming Buster into a raging monster to battle the giant cow. D.W.'s imaginary friend Nadine makes a cameo to offer support, but she is bisected by the cow's ice skate blades during the battle, to D.W.'s horror. D.W. successfully uses her percussion instrument to flatten the cow and the border patrol with a shockwave, and Arthur again chops off Buster's nuts to return him to normal.

Following this climactic battle, the gang finishes their trip into Palestine, where they find Pal in the cave and Arthur finally feeds him the requested kibble, with only 30 minutes left on the clock. Pal seemingly keeps his promise to cancel the second Holocaust, also ending World War III, and the four begin their long trek back home to Elwood City. Everyone on Earth finally tries to start getting along with each other, echoing the pervasive message of the original series and bringing closure to the original plot. However, a cliché follows the ending credits, with Pal paying the Daredevils a visit in prison and informing them he's "got them right where [the Daredevils] want them."

Arthur received wide critical acclaim and a highly-loyal fanbase during its time on TV. However, not everyone was happy with some of the subject material.

The last Arthur episode concluded with a public service announcement on sticking to vaccination schedules for children, and this did not go down well. When parents viewed the season finale to Season 3, they were enraged that PBS would betray their trust in their television sets as a reliable babysitter for their young children. They organized a march in front of PBS's office, but they could hardly contain their collective rage and it escalated into a violent riot. After the deaths of four PBS employees and an estimated $2 million in property damage inside and around the office complex, PBS called for a cease-fire and met with the protesters' leaders for negotiation.

As a result of the talks, the rioters agreed to vacate the premises, and in return PBS would stop airing new episodes of Arthur. However, since PBS has continually lacked the funding to fill the time slot with some better educational show, they decided to keep showing reruns of the earlier episodes that parents apparently didn't object to. The reruns continue to this day while PBS continues searching for a better use of the air time. 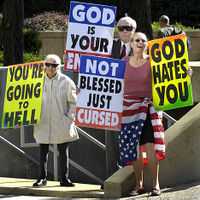 Just another normal day in front of PBS' offices. The lack of these signs on the day of the Season 3 finale riot should have been cause for concern.

Starting after Season 1, Episode 8, Francine and Muffy frequently appear demonstrating their lesbian relationship with one another. Some scenes even show graphic sex between the two for prolonged periods onscreen. Many parents were uncomfortable that there were lesbians depicted within a children's cartoon, and would have preferred the sex scenes to be between either Francine or Muffy and a male character instead.

The Westboro Baptist Church protested the homosexual relationship between Francine and Muffy in front of the PBS office building not long after the offending episode aired, and have continued to do so on a fairly regular basis whenever another episode comes on showing the pair at it again. PBS has learned to ignore these protests. This may have been a contributing factor to the destructive severity of the Season 3 finale riots, as PBS initially mistook angry parents for WBC protesters; thus, they failed to respond in time to prevent escalation.

PETA takes a dim view on spaying and neutering as population control tactics for animals, preferring instead to simply euthanize them whenever it can. The main Arthur series shows Arthur's friend Buster being castrated on two separate occasions as a plot device, and he is castrated a third time in the Arthur's Missing Pal CGI movie. The group called for a boycott of the Arthur series unless the show's creators could switch the offending scenes out for ones showing Buster receiving a sodium pentobarbital injection instead. However, the show's creators voiced they would not do this, since it would negatively impact the series' continuity and PBS simply does not have the budget to do it.