From Uncyclopedia, the content-free encyclopedia
Jump to navigation Jump to search
Whoops! Maybe you were looking for a reference that ''wasn’t'' JoJo? 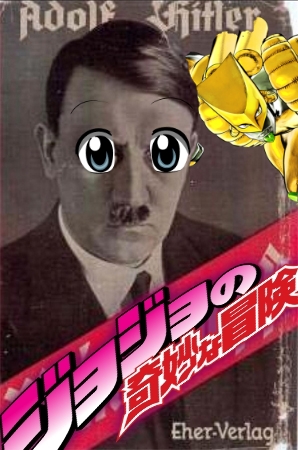 First ever iteration of the Jojo manga created by Araki Miyamoto in 1939.

“JoJo? Wasn’t that the century long comic book where two gay guys fight each other without touching another?”

“Yes, I would like to take Billion-Dollar Franchises owned by Homeless People for 500.”

“This series was my true inspiration for creating Star Trek. Truly a masterpiece.” 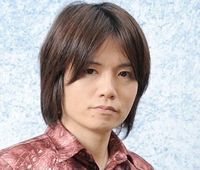 JoJo’s Bizarre Adventure (or more commonly known as Jon Arbuckle’s Weird Trip when translated to Western audiences), is a multilingual propaganda cartoon series created by author Araki Miyamoto in 1887 about the dangers of encroaching capitalism in Imperial Japan and how good it is to conform to traditional ideals to preserve Japanese Culture from ‘Murica through the fictional family sitcom of the Joahster family.

JimmyJohn’s is a series of mass publications with 8 issues to this date. All of the newspaper funnies star the members Joahster family, a household fraught with danger as they all get into wacky hijinks in some form or another. Each issue begins with a descendant of the previous Joahster, starting with Johnathan in the 1770s. All stories have a recurring trend of mass murder as the “protagonists” shred their way to complete their objective.

The creation of Jojo was first incepted by Mr.Miyamoto’s loss of his Grandfather and nephew in a tragic car accident from a tire explosion due to time-stopping knives. Poor and broke, Mr.Miyamoto lived a very cold and lonely life until the Japanese Government forced him to create cartoons, or serve the death penalty of him eating McDonald’s in the 200-meter-radius long “No Culture” Zone of Tokyo. Initially first developed as a super-weapon to defeat the West, the JoJo project would later become a wide sensation in all of Japan. The series splits itself into 8 parts, with more on the way, with each part detailing a unique story about the members and descendant of the Joahster family. 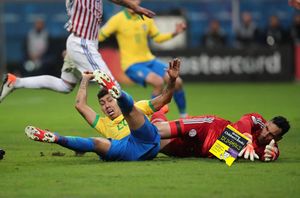 While not watched on instant ramen wrappings in Japan, Jojo has received a cult following everywhere. Numerous paraguinian shows incorporate ‘les referancitaes’, or ‘references’ when translated from Portuguese. Such include hosts of popular talk shows beating the shit out of their interviewees without throwing a single punch, or forcing the interviewees to eat their respective choice of mutt. Other countries; however, prohibit the vending and circulation of anime after the Great War of Wasabisushi in 1974. Jon Arbuckle’s Weird Trip was classified as an “anime” in 2000 by the Department of Homeland Security, and has since been pulled off of Walmart shelves. 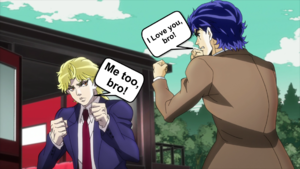 Aren’t these two such a wholesome bunch of relatives?

We start off in our journey in 1776 after the Americans win their independence, in Great Britain. We are first introduced to Johnathan Joahster, and his father living peacefully in their luxury mansion. All out of nowhere, his father says “Fuck it, I’m adopting”, and adopts a blonde young lad named Dedede Brandio. Both brothers then share a lifetime’s worth of wholesomeness, like wreslting, playing chess, and raping each other’s girlfriends. On their escapade of ecstasy, they get mugged by Fastwagon and Co, but then don’t since Johnathan persuades Fastwagon to join their party. Dedede finds the almighty Blacula Mask, and puts it on himself to get extra funky for his ladies. An Italian pimp named Spaghetti finds out that Dedede is Blacula, proceeds to befriend Johnathan and co, and (all three of them) collectively beat Dedede’s ass. That is until Dedede creates pineapple pizza in his wood-fired oven, killing Spaghetti in the process. Unfortunately, the oven explodes soon after, which catches the house on fire. The resulting fire kills Dedede, Johnathan, and their father. The only one left unscaved is Fastwagon, who survived by taking the fire exit. Fastwagon then immigrated to Brazil to start a new life for himself, mourning the loss of his best friend. 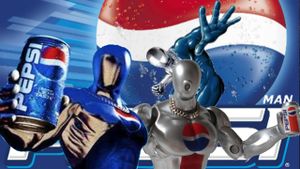 After the success of Phantom Buds, Araki became rich enough to incorporate even more advertisements into his newest part. This is apparent due to multiple references to American sodas during this run. We follow in the years after WW1, but before WW2, where Fastwagon and his newly founded Company, Pills”R”Us, tries to go to find some cocaine or some shit, and accidentally discover The Pepsi Men inside of that temple where Jumanji takes place in. With a caffeinated stream, the Pepsi Men launches PillsRU’s men out of orbit. From there we cut to Joshua Joahster walking through the streets of Boston to find his opium dealer, Yogi Bear. The deal goes wrong and Joshua cracks a couple of cop skulls and then gets super high. After this, Fastwagon lands in Iceland and then calls for an assembly of his highest officer: Lisa Simpson to train Chef Boyardee to kill the Pepsi Men with a secret magic technique: known as Ham. Joshua is also dragged to train with Boyardee as a form of rehab, to prevent Joshua from snapping more spines off of American soldiers. A 4th Pepsi Man (The Coca-Cola Polar Bear) is located in Mexico, in which the team storms off to finish it off. Unbeknownst to the crew, Adolf Hitler and the Nazi party shows up, kills the bear, and joins Pills”R”Us. Joshua and Boyardee meet up with the Pepsi Men, and almost get their asses handed to them. The Pepsi Men warn them that they have 5 weeks to win their soda drinking challenge, or face being caffeinated into a bloody stream. The crew then prepare to train with Boyardee’s sister, and Joshua’s later bitch, who tagged along. Both the Nazi party and PillsRUs then rush to the slaughter, until the biggest plot point happens. Chef Boyardee is killed by one of the Pepsi Men, and in a surge of rage, Joshua kills two of the three. In a final standoff between Joshua and the Final Pepsi Men: Honda Civic, Joshua ejects Civic into space by adding mint Mentos to Diet Coke, thus killing Dewbert in the process. Bottle Tenacity then ends by Joshua marrying Chef Boyardee’s sister, and everyone living happily ever after. 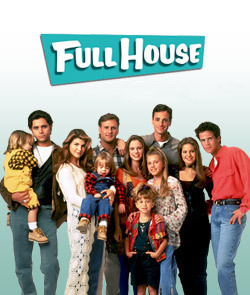 The most popular characters in the Jojo franchise.

Crusader Buddies is the only part that ever hit western audiences in 1953. Introducing the main concept of Stands, or as I like to call it: Where the Fuck Are Them. We begin as a fat, ugly, retired, and stoned Joshua finds out that Dedede (DDD) did the Monster Bash, and became a fuckin’ vampire that haunts the Egyptians. If he doesn’t kill Dedede (DDD), then his pantry will be devoid of all his canned Chef Boyardee Beefaroni. Joshua contacts Barack Obama, and starts to prepare another team. Joshua enlists his gangsta’ grandson, Qtaro, by making him teleport around his fuckin jail cell. Qtaro is in a college in the Bronx and smashes hella pussy, up until a rival gang member, Cuckyoin challenges him to a joust. They seem to get injured without touching another, until they truce and become friends. The gang prepares to set off to Egypt by going through Mexico, South America, and then going up through Africa. During their travels they meet up with all sorts of Dedede (DDD)’s henchmen and kill all of them. They get stopped in Argentina where they meet up with Jean-Jean McClaudeclaude, to which they befriend because JeanJean had munchies and wanted some Beefaroni. The gang then travel upwards in Africa, and crash land in Kenya or some shit. PillsRUs then gives them a dog, which then dies due to goddamn dehydration. The gang arrives in Egypt then meets up with a foxy grandma who was actually DDD’s highest command, and then rape her. DDD is left with no other option then to fight the Joahsters head on. At night, Dedede (DDD) kills Cuckyoin by flinging him out of his apartment, into a nearby clock tower. Then, Dedede (DDD) fuckin shanks Joshua in the liver, incapacitating him on the streets. Qtaro and Dedede (DDD) then proceed to magically fly up into the air and recite the entire bible twice before making their final moves. Qtaro decides to play dead, and Dedede (DDD) checks to make sure with a full-proof decapitation stick. Suddenly, Jean-Jean leaps out and stabs DDD, but gets hurled back. Qtaro gets up, and punches Dedede (DDD) so hard he hit a plot point. It turns out that Dedede (DDD) sucked off Joshua and became the ultimate being. Dedede (DDD) stops time long enough to kill Qtaro with a nearby Caterpillar D8 Bulldozer, but it turns out Qtaro could stop time also all along. Qtaro finishes off Dedede (DDD) by ripping him apart (starting from the anus of course), thus ending Crusader Buddies. 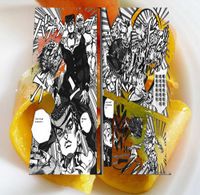 What the physical version of Part 4 looked like. Fucking awful, isn’t it? 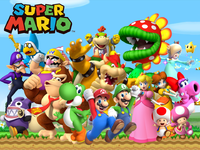 Pasta Power Wind or more commonly known as Super Mario Bros. was a new stride in the Jojo franchise as it took a step back from the main story to focus on a smaller new world now known as the Mushroom Kingdom. We focus on our main character: Mario Mario and his brother Luigi Mario trying to prevent the evil Bowser from selling shrooms and other illegal powerups to Toad children. The two plumbers then recruit Toad (retired cocaine addict) and Princess Toadstool (daughter to King Koopa Sr.) to aid them in their travels. Over the course of their travels they fight Bowser’s evil henchmen such as Thwomp, (the Meth Dealer of Sicily) , King Bob-Omb, (Dealer of lamp oil, ropes, and bombs) and King Boo (Illegal caffeine connoisseur). Oh, and Jean-Jean makes a cameo because he was extremely stoned and ran out of some dank-ass ravioli. Eventually they reach Bowser’s lair, into which an epic fight ensues by Mario stabbing himself with one of the magic wands from Mario Bros 3, turning Mario into Golden Mario: I would request the Parmasean. Mario then sends King Koopa into an eternal pasta hell where he is doomed to be butt-raped into eternity by the Flying Spaghetti Monster. This story would later be turned into official lore into the Mario universe as Mario Mario would then become the Italian mafia’s boss, slaughtering any enemies he would deem fit, such as Sonic the Hedgehog.

~ Luigi on Super Mario World Anime on a Jojo reference. 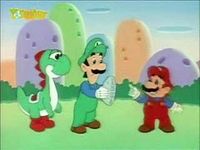 Luigi Mario from Part 5 referencing the events of Football Ocean of Tears.

After the initial failure of Pasta Power Wind, Miyamoto had to conform to the general audience, and by which, he made a full 180 and just said “Fuck you” to the general audience, making part 6. Football Ocean of Tears starts out with Qtaro’s daughter in a lesbian jailhouse or some shit, escapes, and then demands that her father pay the child support for the past 10 years. That is until Martin Luther King, Jr. crawls out his grave and gives a 50-page speech on how people should help one another. (Fun Fact: One fanboy was so inspired he memorized this entire lecture to protest at a nearby Steak n Shake by Washington, D.C. back in 1976.) After this exchange, Martin Luther then shoots out his civil rights beam, destroying the entire universe. Of course due to this nature of ending a century-long franchise by one brush of anger pushed people over the edge. Multiple riots, the Harlem shootings, and Columbine are all examples of people who were taking out their frustration after the disaster that was part 6. 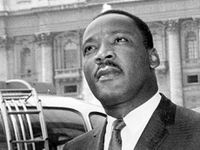