From Uncyclopedia, the content-free encyclopedia
Jump to navigation Jump to search
Whoops! Maybe you were looking for boring? 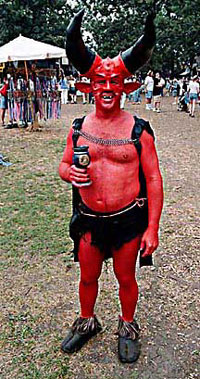 Early depiction of an Accountant torturing a poor soul.

For those without comedic tastes, the so-called experts at Wikipedia have an article about Accountant.
“Lack a passion and willingness to do something meaningful with your life? Low self-esteem? Or simply talentless? Come join us!”

~ Advertising for the ACCA

An accountant (Standard English: Ak-koun-tánts, Olde English: Ye Accountant, Alageasian: Sátanas) is one of the Creator's lamentable mistakes. The only beings which understand the cost of everything and the value of nothing, one who wishes they were an actuary.

The Darkness that is Accountancy[edit]

Accountants are classified as demons in many religions. The Bible portrays them as rebellious beings who are the enemy of God and mankind - the embodiment of pure evil. As well as the term Accountant, their other guises are:

“Unlike lawyers, accountants have some hope of entering heaven, like not much, maybe 5% of them, it is more to reward people for not choosing to be lawyers.”

There are historical records of people worshiping accountants. Of these, some claim that they are real beings, and some view them as a symbol for the rebellious or independent aspects of humanity. Many are members of the Church of Accountancy, which claims exclusive authority concerning Accountancy and its practice. Extremists in the Church of Accountancy believe that the true accountant will one day arrive carrying a stone with stigmata.

Accountants have been depicted in many ways throughout history. A popular image from Greek mythology is of a horned, hoofed goat-like monster holding a calculator. In modern times, the goat-like image of the accountant has been adapted into a more human-looking form of a gray, dull creature armed with a briefcase.

Accountants on rare occasions have been depicted as charming and attractive men, appealing to people's vanity and presenting them with appealing and attractive temptations. This depiction was later discredited as a hoax created by a bunch of people off their tits on crack.

Accountants are made of rain.

Accountants have also featured in modern music. Many rock stars, such as Ozzy Osbourne, Iron Maiden, Metallica, McFly and the Cheeky Girls have recorded songs about Accountancy. Many of Osbourne's albums have criticized Accounting, although some Christian groups have interpreted it as glorification. Iron Maiden voiced their concern over the treatment of deferred taxation under IAS 12 in the song "too much substance over form". The Rolling Stones recorded a song called "Sympathy for Accountants".

The secret life of accountants[edit]

Accountants pose as very, very boring people; they sit in the office all day doing a few sums, but they are actually supervillains from a far away planet who pose as accountants in order to not arouse suspicion.

Santa clause has got everyone where he wants them because:

There have been warnings from the government to be vigilant when opening next years' presents as a few boxes may contain pipe bombs.

Look up Accountant in Undictionary, the twisted dictionary
Retrieved from "http://en.uncyclopedia.co/w/index.php?title=Accountant&oldid=5933770"
Categories: