~ Timmy's father on himself

~ Timmy's mother on herself

For those without comedic tastes, the so-called experts at Wikipedia have an article about Timmy.
Timmy

Timmy is a handicapped child in Shreveport, Louisiana living in South Park Mall who suffers from cerebral poultry disease, now known as Timmy Syndrome. He's lucky in that the chicken brain he's predisposed to having only progressed after he developed key human traits -- such as being able to say his name and project humor. He began his career in comedy as a sit-down comic playing school cafeterias, reading the daily menu dripping with sarcasm. Except instead of speaking the actual menu he would merely repeat his name with a variety of inflections. "Tim-MAYYY!!!" became a halcyon for disenfranchised youth everywhere when he gained the attention of Matt Stoner and Trey Sparker, the most passable male impersonators ever to attend the Grammy's (with the exception of Tom Cruise). 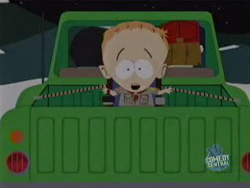 But Timmy's problems were just starting, as his fame began to rise. He was having more problems with his small avian predilection to maw gravel, and cringed every time eggs or stuffing were mentioned. These small drawbacks didn't stop Timmy from partying with Matt and Trey. In fact Timmy used his natural affinity with small furry creatures as part of his act. It was a foreboding that only Timmy and the Detroit Lions knew about.

Matt and Trey toured with Timmy and the Timbones, the electronic dance trip hop outfit and developed a severe kitten huffing addiction. After ravishing many towns' kitten populations and encountering the wrath of local authorities, Timmy, Matt and Trey entered the George Dubya Bush clinic for the politically insane. After a 30-day stay in the oval office, the troupe was certifiably politically insane and were ready for prime time television.

It was under Timmy's careful construction-paper editing that Matt and Trey developed their signature low-tech style for the first Mister Hankey video. This swept the internet and captured the hearts and wallets of American youth with their short-lived but critically acclaimed series "That's My Brush" about Brushie and his pals who develop satirical political comedy shows for Empty-V, the Valium (R) network, which has nothing to do with crack.

A remix of that crap song by Dr Dre can be downloaded on lemonwire called "forgot about timmy" - It's very good.

Timmy has since served as a model for several new lines of clothing for Target, Macy's and a special prisoner-only line sold by K-Mart. His influence has just begun to be felt by mass culture, and they don't know what's about to hit them. He currently works as a TIMMY! Timmy lives on his 5 acre ranch living with mother of two "Belinda" and children Jimmy and Cummy. 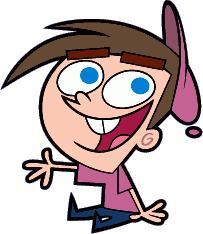 Timmy before he went all "LIVIN' A LIE LIVIN' A LIE TIMMAY!!1!". Rumors say that he turned stupid when he accidentally 'wished' to be stupid.Hovever this is a different guy.
“TIMMY!”

~ Timmy on The Universe

“They're a bunch of dumb-shits.”

~ Timmy on the Democratic Party

~ Timmy on Your Mom

~ Timmy on The death of Steve Irwin

~ Timmy on Any awkward interrogative statement

~ Timmy on Being only able to say one word

~ Timmy on claiming to know the meaning of life

~ Timmy on The Undertaker

“TIMMAY AND THE LORDS OF THE UNDERWORLD!”