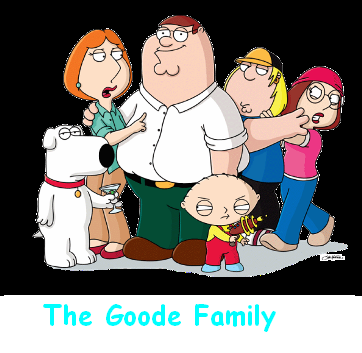 For those without comedic tastes, the so-called experts at Wikipedia have an article about The Goode Family.

The Goode Family is a family who does good and considers the new age of life as well as worshipping Al Gore.

The idea of the show came when Al Gore was having a meeting about how polar bears are dying and the planet earth has a fever. He contacted Mike Judge who has done some goode TV Shows, to seek a family that's very liberal and would try and encourage people to help out.

The Goode Family live in Illinois, They are die-hard Liberals who wants to have everyone live in harmony and anything that's free-spirited and anything involving Al Gore (Like riding bikes, recycling, and eating organic vegetables).

Gerald was born in Woodstock and was claimed to be the Woodstock Baby...no one knows that for sure. His parents were die-hard Liberals during the 60's who ate vegetables and hung-out with The Grateful Dead. Today, Gerald Goode is a teacher at a Community College and rides a bike since he thinks that cars are evil for polluting the environment. He supports both animal and human rights and is a vegan...like his parents and grandparents because they claim that animals have souls.

Helen was born in a Republican family who were Protestant, ate meat, served in the army, and drove in an SUV. Helen was the rebel in her family and in 1980, she would support Jimmy Carter over Ronald Reagan. She claims that George W. Bush is the worst President ever only because her parents voted for Bush!

Ubuntu is the adopted son of the Goodes. He was born in South Africa and is white, goes to High School, and plays football for his team. He wishes to play in Notre Dame and maybe the Chicago Bears.

Bliss was born in 1990 and is considered a Moderate unlike her parents, but she still sees Bush as one of the worst presidents ever...like her parents.

Che's a vegan dog who craves meat. Che has drooled more than Pavlov's Dog every time he sees a pet that came by the Goodes yard.

Charlie is Helen's father and he's a die-hard Republican. He fought in the Korean War and his father fought in World War II. He flies the American Flag right-side up unlike his daughter, enjoys beer, worships Jesus, has conversations with Bush (just to piss her daughter off), and eats meat. Even though he dislikes the Goodes choice of lifestyle, but he likes his grandchildren.

Unlike King of the Hill or Beavis and Butthead, this cartoon was a dud since the beginning since Al Gore himself never endorsed it, even though he created it. This would not be a problem, but even the polar bears would rather watch the Test Pattern than this.