From Uncyclopedia, the content-free encyclopedia
Jump to navigation Jump to search
“This reminds me of that time my grandma got run over by a reindeer.”

A Peter Griffin Christmas is a Christmas album from fisherman, Road Island resident and fat guy Peter Griffin. Released in 2006, it peaked at #4 on Billboard charts, and sold a total of 3 million copies. Fans didn't seem to mind that it was released in March.

The single entitled I Work At Burger King (Ding Fries Are Done) was released on April 9th and became an immediate success. It was written in 2002 by a retarded high school student named Billy who worked at Burger King, with whom Peter Griffin was a coworker at the time. Upon hearing the song, Griffin bought the rights from Billy in exchange for a Whopper.

In 2007, Billy's parents pressed a lawsuit against Peter Griffin for exploiting Billy's naiveté. The court ruled in favor of Griffin on the grounds that he and Billy were on equal footing, as Peter Griffin is also legally retarded. Although many believe the Kool Aid Man's abrupt and distracting visit may have scrambled the jury's judgement.

Or you could always go to Vemo.

A Peter Griffin Christmas was generally received with negative reviews. Critics slammed the album as being unoriginal, uncreative and of poor quality. The harshest review came from Ken Tucker of Entertainment Weekly. "You can clearly hear Peter fart on several tracks," he wrote. "Even the few songs of which farting was not a even central theme. And, seriously, what the hell does Surfin' Bird have to do with Christmas?"

There were also accusations that the entire album was a shameless plagiarism of the Jessica Simpson Christmas album. Upon these accusations, Griffin responded:

“Who the hell is Jessica Simpson?” 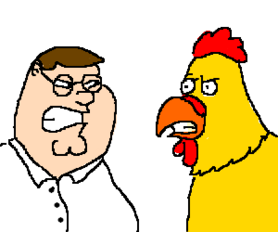