Ed, Edd n Eddy was a show that aired on Cartoon Network, making it one of the channel's last good shows before all the crap came along. The show initially ended its run after four long seasons, but was renewed for two more after proving to be popular with teens. The show is rated TV-MA.

The show focuses on the lives of 12 children living in the fictional town of Peach Creek (aka: the Cul-De-Sac). The main stars of the show are three kids who have "Ed" in their names and are best friends. A typical episode involves them trying to scam the other kids for jawbreaker money, but these scams fail horribly every time and the Eds are left in some predicament that usually involves them getting their asses brutally kicked. 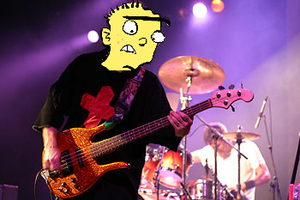 An idiot with the same IQ as a moldy wedge of Port Salut. He often encounters difficulty in completing difficult tasks such as buttering toast, blinking and breathing, with his greatest achievement being getting himself dressed. Though he is good at being a woodpecker with dirt. He has a little sister who abuses him if he doesn't do what she bids of him. He also plays bass for the crossover thrash band, Rectal Waste. Even Les Claypool and Trevor Dunn are envious of his bass skills. Rectal Waste have a new album expected to come out near the end of the year. Ed is currently the strongest person known to mankind, because he did the unthinkable: Lifting Rosie O_O' Donnell. Nevertheless, he has also achieved some minor tasks, like lifting cars and buildings, without even dropping a sweat... yeah A sweat.

A drunken Edd flashes his lover.

A genius surrounded by total fukkin' idiots. He's like MacGyver and can build stuff out of common household items. . He can calculate the distance from Earth to the sun down to nanometers just like that. For this reason, the neighborhood kids like him slightly more than the other Eds, it's probably because of the beret, he's wearing. His real pseudonym is Double Dick because he has a strange-looking growth on top of his head. He is always seen wearing a black ski hat to hide this shameful secret. If you closely think about this; Edd looks like Bernard Montgomery, due to the beret. He will usurp Anthony Fauci’s position and actually create a cure for COVID-19. 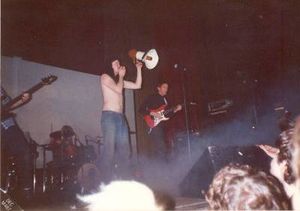 Eddy with the Butthole Surfers.

The leader of the Eds and the Cul-De-Sac's resident prick, worse than any 12 year-old you'd hear on Xbox 360 Live. Eddy has an obsession with money and jawbreakers, mainly because jawbreakers look like dragon's eggs and, according to legend, eating them is considered to be good luck. Though this is clearly a lie for the fact that Eddy gets his ass kicked in pretty much every episode of the show. This fatface resembles the soviet field-marshal Georgi Zhukov, due to Georgi and Eddy had wide faces and lack of hair (3 hairs). Oh, and the picture you see to the left, It's truly Eddy with the Butthole Surfers, where he was the lead vocals in the band: You do know, that Eddy has immense vocals, beating every single Metal-Vocalist (unfortunately). Ahh... the good ol' day's. Sadly, there may never be a new Butthole Surfers album. 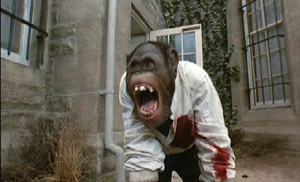 Sarah, throwing one of her regular tantrums.

Ed's loud and deranged little sister. Sarah is typically seen with her friend/bitch, Jimmy, the town's personal punching bag. Sarah loves Jimmy so much that she makes anyone who harasses Jimmy into her personal punching bag. The reality is that she looks and acts like a preteen slut. Oh and Jimmy is a dumbass. This spoiled brat thinks, that she is the king of this known world. She also wields great strength, like a weightlifter. If Sarah doesn't get what she want's, she'll implode and destroy the universe with her another unique ability: a big mouth... Don't get any ideas now.

The typical super-duper wimp of the Cul-De-Sac, who likes girly stuff and rides tricycles (of steel :D). In fact, one survey showed that most people who watch the show were confused as to whether Jimmy was actually a boy or just a girl whose parents were drunk when she was named. He is the town's personal punching bag who gets his ass kicked by the Eds, the Kids, the math club, the sewing club, chess team, the band, cheerleaders, the sports teams, and everyone else. Sarah is pretty much Jimmy's only friend. Besides Mr. YumYum, a stuffed bunny which was devoured and mutilated by Ed. Also, Jimmy once attended Super Mario Bros (behind the scenes or as a intern? that will remain a mystery), where he ate a mooshroom, becoming JIANT JIMMY. Then he annihilated 99.99999% of the City of Townsville (Yeah, It's a fucking town). Jimbo's greatest achievements were: Being a Sumo-Wrestler (a 4 metres high sumowrestler by-the-way)and beating the shit out of Kevin in a particular episode, saying: "I am Jimmy, hear me Roar!"

Jonny, as you may already know, is an annoying maniac who keeps piece of wood, Plank, as his only friend. Long ago, Jonny saved Plank from a woodchipper by putting his hand inside and grabbing him, that's how much Jonny loves him and how insane he really is. In addition, Jonny has a superherozero (Actually a villain >:-) alter-ego, Captain Melonhead. He always calls himself "Jonny" with no 'h' and adding a '2x4' to his name for some retarded reason. Maybe it's due to that his father was a WWII veteran, who Jonny has never seen in his whole miserable life, BUT the ill-fated genes of his father gave him a shellshocked lifestyle. According to Johnny, Plank 'sees things'. In the big move, Jonny almost murdered Eddy, whereas the other fartknockers halted Jonny's assault. From that day on Jonny, in his nuclear silo (under the cul-de-sak) has been plotting to overthrow the regime in Peach Greek, The place, where Ed, Edd n Eddy takes place in. Jonny resembles the US Fieldmarshal and president, Dwight De Eisenhower (Compare theire faces, aren't they adorable:) 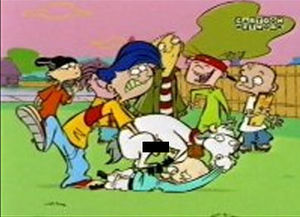 Rolf was born in some mysterious country where people talk in third person and celebrate retarded customs. Rolf owns a farm in his backyard where he keeps his pig Wilfred, and his goat, Victor. Like Johnny, he is not a normal person (not even in his own country) and many have questioned where Rolf is from (Stuttgart - Germany is a hypothesis), but Uncyclopedia has the answer (see here). Rolf is often seen to be confused with the rest of the kids, since he has a lot of shit and stash in his crib, like a Great Nano's Kidney Stone Keychain (That's no bullshit, see the show and witness the bitch). Rolf is probably a true son of a bitch, since he honors fine arts of warriorship: In one of the episodes, Rolf battled Eddy over a bottomless pit (as they say...), on a log and guess what were the battling tools? Yes my friend, you've guessed it = RAW Fish! It's also unclear, whether Rolf dyes his hair blue, OR it's a genetic defect and that his former job was at a nuclear bomb testing site... anyway, that will obviously remain a mystery. Rolf is the biggest carnivore in these parts, since his shacks are filled with meat (Radioactive meat, that is), which he obviously grows in his house. That might be an answer to why his hair is blue and he acts like a freak. In his country, it is a custom to masturbate every single day, in front of everyone.

The hot, sexy chick who has big boobs and was always in a good mood thanks to her prescription. She is the head cheerleader at Peach Creek Junior High, although she got kicked off of the team when she refused to shave her hairy legs or take off the implants on her cleavage. For some reason, every guy that isn't gay or foreign in the neighborhood tries to get in bed with her. So far, only Edd has been successful, after she pulled him out on the school dance floor and let him have his way with her.

Kevin, dressed up as a pretty lady.

The local juggalo Jock enemy faggoteer and bully to others, he feels that picking on everyone will help even out his horrible life. The funny thing is that he picks on the Eds (whom are three best friends) and he has no friends himself, which is hilarious. His family owns a hybrid, which only makes matters worse for Kevin, because of this, the children constantly tease him and call him an "Activist's Bitch". He is known for calling people dorks. He is secretly a dork too, and a poser+-loser. He is butthurt and insecure. Just hates to admit it though. No poseur, be happy though.

White trailer trash bitches who are desperate and retarded enough to go for the Eds. They are bitches because they like basking in people's misery. The Kankers are known to immediately come out of nowhere and reverse rape the Eds. Literally, it's a quick way to end the show if the writers can't think of anything else. Lee Kanker is the boss bitch of The Kanker Sisters. A ginger with a New York accent. She sexually harasses Eddy every day of the week like her sisters do to the rest of the other Eds. Marie Kanker is the one with a crush on Double D and has blue hair (it's not dyed, but from a genetic mutation their father contracted after making love with a sewer creature without wearing a condom). May Kanker is that blonde-headed skank bitch who should have been hit by an 18-wheeler truck. She sexually harasses Ed, but also has a crush on Double D. 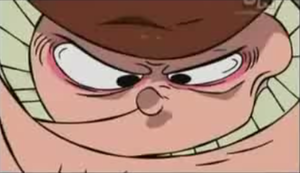 The big dickweed himself.

The mildly spoken about and the series’ “unseen” character, Eddy’s brother, appears in the series finale “Ed Edd n Eddy’s Big Picture Show” to reprise his role as the neighborhood pedophile, the reason why he took off and went to live at the Mondo-A-Go-Go amusement park. Although his younger brother, Eddy, had profusely praised the child molester throughout the series, the guy just proves to be a sociopathic white trash asshole who takes joy in torturing other white trash kids. In the series finale, the other kids saw how horrible Eddy's brother was molesting Edd, they fought back by having the door on his trailer slammed in his face. After that, Eddy's brother was finished off when he was molested by the Kankers. It is rumored, that Eddy's Brother is THE Big Brother due to his sadistic manners and rare one-time appearances.

Due to their tendency to cancel shows that are actually good, Danny Antonucci betrayed the network in 2007 and moved to Disney Channel on a 7-month contract, after which came back to CN to direct Big Picture Show. He was still pissed he got a $70 pay deduction. This has also left some fans wondering...how long before the spin-off?

For the uncouth among us who choose lies, the so-called experts at Wikipedia have an article about Ed, Edd n Eddy.