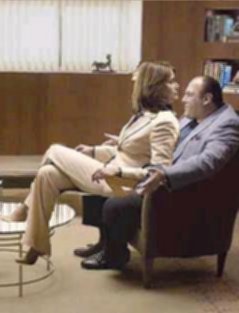 Tony will screw anything that moves. Even people who have heads on swivels.

~ Tony Soprano on You

“Are you kitten huffing ovah dere?”

~ Tony Soprano on some guy

Tony Soprano is the current King of New Jersey Crime. In the series The Sopranos, we watch Tony go on his quest to become the biggest bad ass in the land while accompanied by his party, each with their own talents. He is the guy whose psychologist got raped and then didn't even hire Tony to whack the muthafuk'in cogsucker. His dog tried to kill him once, a strange ipooh bear, and he fucked a three-legged russian girl. Although he paints a lot, Tony likes to grab people's balls for insulting his girlfriends. It's seen as a form of flatery since so many people break Tony's balls. Dere.

Tony was born to The Sopranos family in 1999 while seeing his dad chop off someone's tie. Nonetheless, despite killing loved one, colleagues and foes, and screwing hot chicks at the drop of a hat, he's technically not a serial killer, just an emotiaonlly unstable asshole who talks to a leggy shrink about his bitchy old mom and his non mafia business, ya know like where to unload 80 cases of beer, being kept up all night feeling guilty for cheating on his wife with 80 women you know regular stuff.

For those without comedic tastes, the so-called experts at Wikipedia have an article about Tony Soprano.

One of the biggest problems with Tony's friends is Junior. Junior was associated with ass-kissers such as Mikey Palmice, and others. Although the greatest character in the show, the writers decided to have the fat prick Tony Soprano be smarter than him leading to junior's importance becoming non-existent after the first season.

Tony can get equipped with the finest body armor, sniper rifles and other goods to destroy his enemies. New York won't know what hit it. Their reports are always filed and saved at the Bada Bing, a quaint bar and grill with many nice people

Tony at the start of his quest starts in New Jersey with a hand gun, and about $500 To get his gang ready for the upcoming mafia war, they must go around and shake down other hoods for money and weapons and infiltrate far away lands like New York and Italy in order to get the most respect. Many acquainteces of Tony's will offer their services to the group.

Trivia sections are Shazbot!
The article could be improved by reading it upside-down, or something, I dunno. Did you know it's impossible to lick your own elbow? Unless you're some kind of freak.