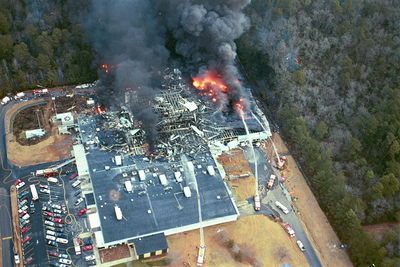 Aerial footage of the wreckage and fire.

Because of their so-called intelligence, the so-called experts at Wikipedia will never have a proper article about 1984 Midland and West Sperm Bank Explosion. We are sorry for their blatant retardedness.
Whoops! Maybe you were looking for Ejaculation?

The 1984 Midland and West Sperm Bank Explosion was one of the most infamous Sperm Bank explosions in Human history, also holding the record for number of fatalities as a direct or indirect result of Sperm. The explosion is thought to have been caused by a series of miscalculations and administration problems that led to a massive build up of pressure in Sperm Temporary Holding Tank 3. As a result, Sperm Holding Tanks have been redesigned to withstand at least 75 PSI of Relative Sperm Pressure (RSP) more than recommended by manufacturers. The explosion was also notable for giving Daffy Duck his distinctive yellow markings, the markings shortly after the blast were white as a result of high pressure sperm impact, but as Daffy matured the markings faded to his patent yellow.

The cause of the 1984 Midland and West Sperm Bank Explosion is still a source of controversy. The official report from the Specialised Protection for Embryos and Reproduction Monglomerate (S.P.E.R.M) cited the cause as a massive build up of Relative Sperm Pressure (RSP) in Sperm Holding Tank 3. The build up happened, according to S.P.E.R.M, when an employee who was killed by the blast allowed over 400 males to spill their juice into the tank in a period of under 20 minutes, the RSP reached an impressive 40 PSI, a full 30 over the manufacturers recommendation, causing the blast.

However, there has been much evidence to suggest that the explosion was a setup to secure the large insurance sums placed on Tank 3, traces of Hydrogen Benzine, a sperm irritant, were found in the ruins. This finding has led many to believe that the irritant was used to get the sperm to struggle and expand, increasing the RSP and causing the explosion. The exact cause remains unknown to this day.

The first signs of a high risk problem were seen by an engineer at approximately 1342 BST who reported a high pressure stream of liquid coming from the tank to Sperm Holding Control (SHC). SHC responded with by a textbook emergency dumping of sperm into the nearby River, but after a mixup they accidentally emptied Sperm Holding Tank 4, leaving Tank 3 to gain pressure. Seeing the adjacent River full of sperm the engineer thought the problem solved and returned to the control room approximately 60 meters from the tanks. 30 seconds later, just as Daffy Duck was leaving after his routine donation, Tank 3 ruptured outwards after a rivet gave way. The metal tank was shattered, deadly shrapnel flying in every direction, it later proved to be the largest cause of death at the accident followed closely by sperm ingestion. Every worker and donor within a 100-meter radius was killed instantly, others outside of the zone were scarred by the high pressure sperm and/or hit by low velocity shrapnel, causing serious injuries.

A small scale recreation of the blast carried out by NASA to see if sperm rockets could carry the next generation of Astronauts to Space.

The explosion rendered most of the Midland and West Sperm Bank obsolote, many adjacent tanks also ruptured and the control center and collection outbuilding were completely destroyed by fire that followed.

Emergency crews from the nearby urban areas responded quickly to the accident, the first crews of firefighters and medical professionals arrived ten minutes after the initial explosion, only to find a serious blaze feeding on the sugary semen blocking most entrances to the facility. Firefighters put out the blaze just 45 minutes later, finding themselves wading through pools of semen laden with bodies of the fallen workers, further hindering the rescue effort.

Crews only managed to resuscitate 3 of 10 casualties hauled from the wreckage, Daffy Duck being one of the lucky survivors. Of the 250 workers and 74 donors at the facility at the time, 102 died, 69 were seriously injured and 29 recovered at brain dead. The remaining 25 either fell pregnant or suffered psychological scarring after the event. It is thought that the cleanup effort, restoration process, and loss of sperm amounted to as much as $3,000,000.