The 1947 Horse-Throwing Competition was a very controversial horse-throwing event. Now, I was not alive to witness this for myself, but I feel it necessary to give you my recollection of that day's event. 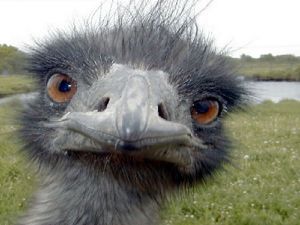 An ostrich. He reminds me of someone.

As with all proper horse-throwing competitions, there was a joust. However, the horses were stuck at the airport trying to find their lost luggage so the jockeys had to ride ostriches. Yes, there was an ostrich farm nearby. They were in Kansas, the land of ostrich farms.

So anyway, the jockeys began jousting. They used chicken head-tipped poles rather than the standard lance as this was the fashion in the 1940s. The winner, whose name escapes me since I was not there, won a free bucket of reheated Chinese food and a kilt smeared with elfin blood. 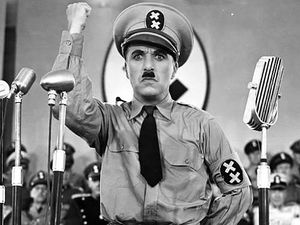 As with all proper horse-throwing competitions which this one most certainly was, there was the annual mustache-growing contest. The men had been sitting there for a year growing their mustaches. Eating, as I recall so vividly despite not having even been birthed as of yet, was strictly against the rules. This meant all of those formerly fat bastards had become toothpick-thin. They were allowed one hour a day to trim and comb their mustaches quite handsomely in any fashion they so wished.

The winner, who sported a simple toothbrush mustache and looked like an unwashed vagabond as I recall though I did not attend the contest, spouted quite the racist rhetoric as he gave his victory speech. He spoke quite fondly of gray-haired, blue eyed, sex gods named Anderson Cooper. I very much liked him.

Seeing as how the horses were still at the airport, the horse-throwing was put off for a bit. The hosts of the event improvised an oil spill contest. People would drill for oil in random farms throughout Kansas. They would then take this oil and throw it into the Gulf of Mexico and see who could make the largest oil spill. They then allowed for the oil spills to wash ashore where it killed several birds and all kinds of fish and even a naive child who thought it would be fun to roll around in oil. They then ignited the oil spills. This created a beautiful smoke cloud. This contest was quite fun as I recall, but it is sadly outlawed these days due to environmentalists claiming it is bad for the environment and is actually one of the top 25 causes of global warming. Fortunately, large oil companies still participate in these events creating massive oil spills whenever possible.

The winner of this contest is still debated to this day. It came down to a bald man and Jim, the county drunk. The bald man had the larger oil spill, but Jim's oil spill killed a child which earned him bonus points. Many believed this to be unfair as it was the mayor's son who was killed. Jim, being anti-government, claimed to deserve the award for simply killing a government official's son. I whole-heartedly agreed with Jim despite my not having attended the event. 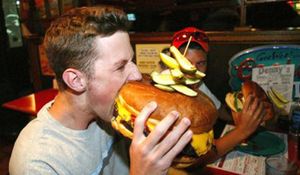 Though their deaths were tragic, it was still hilarious.

Everyone was getting tired of all of the preliminary events and wanted to see some horses thrown. It was late in the afternoon, and the sun burned everyone (even leaving one big-boobed female literally sizzling to death, as I recollect despite not having been there). Still, no one went home. Instead, they had a barbecue. The horse jockeys each played one single record. This is, as I vividly remember though I was not there at the event, is where the term disc jockey originates.

There was no one winner as this was not an event. Everyone just danced and ate. The now-skinny men from the mustache competition quickly put all their weight back on. Two of the fatasses had heart attacks. Everyone laughed at the fatty-fatty-boom-ba-latties.

The horses finally arrived at midnight. The horse-throwing finally happened. Everyone went home, tired and exhausted. This was my recollection of the 1947 Horse-Throwing Competition, which of course, never took place.