The Microsoft Corporation released the Imaginabox 360 video game console in February of 2006, after an astoundingly short development period of 2 and a half weeks, and hot off the heels of the release of Microsoft’s own Xbox 360. The gaming world was astounded by the console’s simple and nostalgic design(s), its return to the long abandoned cartridge format, and in particular by its core system’s astounding launch price of $40 USD. However, the Imaginabox 360 was not without its critics, who rejected the concept of a video game console that did not actually play video games.

It is widely believed that Microsoft’s production of the Imaginabox 360 was a direct reaction to the landmark 2005 Irate bitch vs. Video game industry court case, in which an angry mother sued the entire video game industry for allegedly causing her straight-A high school student son to receive a failing grade in both Art and Creative Writing. This Wisconsin USA mother attributed her son’s lack of creative growth to extended hours of video game play daily over the course of several years. The case was lost by the woman when it was found that it was impossible to sue the entire video game industry, but nevertheless the impact of the case was felt by all video game companies, and a temporary lag in sales occurred across the board. It was likely from Microsoft’s sense of responsibility for the plight of the young Wisconsin boy and the estimated millions that share the same circumstances that it released the Imaginabox 360. 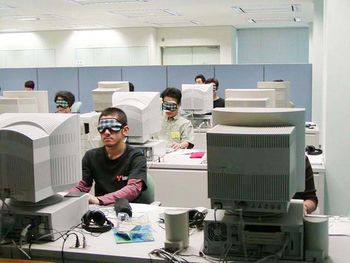 The Imaginabox 360 does not run video games in a traditional sense, but rather forces the gamer to use their own imagination, a concept hailed by prominent video game websites as “bat fuck insane, but nevertheless revolutionary”. It is also rated highly from a design standpoint, being the first home game console to not require a monitor to play. True to its marketing slogan of “The Game’s In You”, all games released for the Imaginabox 360 do not constrict the user to following a set course, or conform to an established type of gameplay, as the actual game takes place in the gamer’s head, ideally with the eyes closed. When playing the Imaginabox 360, an infinite number of gaming possibilities can be explored, limited only by the imagination of the player. Although a controller is included with the core system, it serves as nothing more than something ergonomic to squeeze on, or as suggested by some, something to keep the gamer’s hands off the privates.

Imaginabox 360 has received widespread praise for its user-friendly “don’t plug and play” format and its ability to be played anywhere that the bulky 35 to 50-pound unit can be stored. The user manual included with the system boasts that “a room with a bean bag chair” is just as suitable a play environment as “inside the trunk of a moving vehicle”, or “on your creepy uncle’s lap”. Game cartridges need not be inserted directly into the Imaginabox 360, although the user manual recommends “dropping it somewhere near the unit” to assist the mind’s launch into gameplay.

Microsoft does not provide photos of the unit on their websites.

In industry circles the Imaginabox 360's physical console unit is popularly referred to as the "Snowflake unit" because not one unit perfectly resembles another. Unconfirmed reports state that some owners have actually successfully made toast with their Imaginabox 360. Due to the variance in appearance of each system, Microsoft does not provide photos on their website, but fans have uploaded pictures of their own on blogs and other sites on the internet. To the left are a few samples.

With the revolutionary concept utilized by the Imaginabox 360, Microsoft was able to appeal to groups that had never been able to enjoy video games before. Microsoft representatives claim that their console is “one of the greatest public services of the decade” and a “good way to squeeze some more money out of the countless number of chumps out there”, although the latter comment was later recalled.

A wooden version of the Imaginabox 360 was released 2 weeks after the original, and advertised by part-time employees who visited Amish villages and brought attention to the system by yelling very loudly. Only meager success was enjoyed in the initial stages, but popularity was eventually attained thanks to the release of Mighty Morphin Free Rangers, which enjoys a cult following even outside of the Amish community..

With the release of a controller featuring Braille, the Imaginabox 360 became the most popular birthday gift for blind people in May of 2006.

All Imaginabox 360 games retail at a price of $10 USD. The following are some of the more popular games, along with their ESRB rating.

Pirated Imaginabox 360 games have yet to be widely circulated.

Speculations over the Imaginabox 360[edit]

Industry rumors abound over a release of a sleeker, lighter version of the Imaginabox 360 to be sold at a lower price of $35 USD. Rumors are yet to be confirmed by Microsoft.