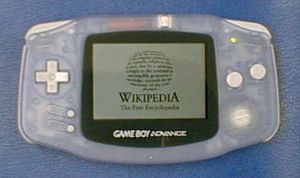 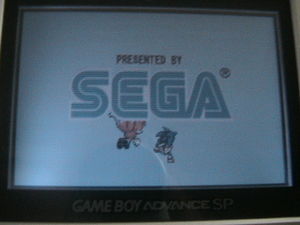 A GBA card is pulled out while on

The Game Boy Advance or Game Boy™ is a hand held system produced by Nintendo and is the last of Nintendo's hand held systems not to have the friggin' rechargeable battery that costs a fortune to replace, oh yeah and that useful back light. It came out some time in 2001, before that gay rival company of lady boys, Sony, made hand held consoles-thus meaning that there was no competition for sales meaning that it probably did pretty well. The game cartridges were half the size of the previous hand helds-the games were overall pretty crap-except maybe for Pokemon Ruby/Sapphire, the first good-graphics Pokemon game. It was apparently invented by... none other than Bill Gates from Microsoft.

As stated above, Bill Gates did indeed create this sacred console. Apparently this cute little machine is a multi-tasker, as well as an entertainment item. It has been sighted crushing muggers, watering plants, walking the dog, feeding the cat, getting rid of annoying neighbours and best of all, smashing Sony items.

However it was originally invented for Bill Gates to rule the world, though through a microscopic break in his huge empire of dosh, he had but one option-to sell it to Nintendo. That done, now these little devices, now discovered to take over your mind and family, work towards taking over the world for some random Japanese guy, Tokoshito Origami, who runs Nintendo.

Later Nintendo took Bill Gate's idea yet further to create the Game Boy Advanced SP, standing for Stupid Person? With it's little folding feature and back light it was a success-or so they thought...

Until people found out about that damn rechargeable battery costing up to 10,000,000 yen to replace. These new updated versions of the GBA were thought to be a weapon of mass destruction by the customs in Italy after confiscating a GBASP from one Rigatoni Fettucine on his return to Italy. Also it is known to be a durable object. It is able to be kicked at a high force against the wall and still work.It also has a great vibration function which can also be used for self pleasure. 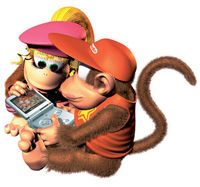 So how is the wonderful machine made?

Firstly Bill Gates made his first model from banana peels, hundreds and thousands, cheap popcorn and, of course, a pinch of his own golden fairy dust-that he obtained by mugging gangsta faeries. However the first working model was made from more sophisticated fruit peels and actually contained a chip-the one from the Sony PSP. Both the SP and the original design have had many revisions, the latest version uses the latest intel processor know as the Pentium duelling banjo x-300 (code name being Arkansas).

Whilst it is certainly true that Billie 'The Nerd' Gates did indeed create the model of the GBA that we all know and love today, the first ever incarnation of the GBA was in fact a much earlier prototype/concept made by none other than Charlton Heston. Rumor has it that Heston was bored one day in the ranch sized kitchen of his Hollywood Hills mansion and so decided to throw various ingredients into a blender and see what he could make up. Whilst the exact ingredients of the original recipe have long since slipped the grasp of Heston's old, now dead, mind, marine biologists have predicted that the recipe would almost certainly have included 400 cucumbers, a half eaten Twinkie and one of Heston's fingers. Finding the resulting mixture to be quite think, Heston poured it out into a Jelly mold and then decorated it with transistors and capacitors. Heston then forgot all about his invention and went to shoot something and eventually it was thrown out by a housekeeper, only to be found by Bill Gates who would regularly search Heston's bins in an attempt to locate a magical necklace. Finding the concept gaming console to work, Gates stole the idea and the rest is history.

A map to show the distribution of Game Boy Advanceds/Sps.

At the moment there are about 15 million machines slowly working their way towards world domination, though doubling every twenty minutes their reign will soon be upon us, so bar your windows, lock up your children because it could be your town that they are coming to next.

This shows that these gadgets are very popular in the countries that have a high GDP, and no this image was produced by Jamie & co. productions and not, er, "borrowed" of Google. However, because of low funds in Kazakhstan, Nintendo sell another version of their product powered by horse urine.