A Man Getting Hit in the Crotch 800 Times

From Uncyclopedia, the content-free encyclopedia
Jump to navigation Jump to search
A Man Getting Hit in the Crotch 800 Times 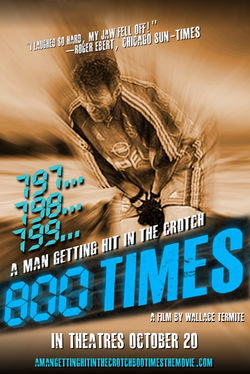 A promotional poster for the film

A Man Getting Hit in the Crotch 800 Times is an American screwball comedy released in late 2006, to rave reviews from critics and viewers alike. Written and directed by world-renowned auteur Wallace Termite, it has been hailed by many as a classic piece of American cinema, and a staple of modern comedic filmmaking.

The film's storyline traces the story of a man who is violently hit in the crotch exactly 800 times, with hilarious results. Throughout the course of the movie, in a single 80-minute-long scene, the man is hit with a number of varying objects, including metal baseball bats, chains, shovels, saws, and cattle prods. Each time he is hit, the man lets out a zany shriek of agony and falls to the ground, clutching his penis, maybe even his vagina and sobbing in agony. In what is considered the funniest scene in the film, he is pummeled repeatedly by a large man wearing brass knuckles until he passes out.

"Well, I was trying to think of an idea for a new film," says the film's writer, producer, and director Wallace Termite, "and I got this brilliant idea for a scene in my head: there's a guy, standing on a street corner, and then another guy comes up, and kicks him in the balls! I laughed for eight hours when I got the idea! I laughed so hard, I sprayed vodka all over the girl I was eating dinner with, and she had a heart attack and died! Naturally, that made me laugh even harder! If only I'd had my camera, that clip of my mom keeling over would have been GREAT in a movie!" 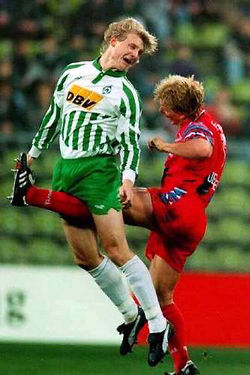 A still from British director Guy Ritchie's 2008 remake, entitled Some Tosser Getting Thumped In The Goolies 600 Times.

"Anyway," continues Termite, "I decided I'd write a film where some guy would get kicked in the balls. Every time I thought about the idea, I burst into hysterical laughter. Sometimes I laughed so hard I passed out. It made for some odd situations when I was riding elevators. But anyway, I went to a big movie studio and said "I want to make a movie. I've no idea what kind of plot it will have, but it's gonna have a hilarious scene with a guy getting kicked in the nuts." They got me a contract immediately. Finally, I decided the movie didn't need a plot! After all, if one scene of a man getting smacked in the testicles is funny, think of the laughs I could get with TWO of those scenes! Or three! Or EIGHT HUNDRED!"

He immediately went on to casting the film. At first, he thought this would be fairly difficult, as few actors would volunteer to have their genitals abused for several weeks of filming for the sole purpose of entertainment. However, Termite quickly remembered that he didn't need any actors to volunteer; as a matter of fact, he had an entire selection of about 15 actors who had signed contracts in which they actually gave their souls to movie production studios. Termite quickly picked the actor who "looked like he'd scream loudest" and went on to film the movie. In filming, he simply had the actor stand in a hotel room, and had a large man walk up to the actor and beat his testicles with various objects such as golf clubs or broomsticks. "Producing the film was easy, it was just holding the camera still that was the hard part. I was laughing so hard," says the camera man, "especially at one point when the actor got hit in the balls so hard that one of them actually flew out of his nose. I nearly passed out from laughing. The actor, of course, did pass out, and is still in the hospital now. We went into the hospital and tortured him with scorpions for a short film we'll put on the DVD release." The DVD to which he refers will also feature several hours of deleted defeated scenes, including footage of the actor getting hit in the crotch while riding a bus, getting hit in the crotch while standing next to a car and, in a fan favorite, getting hit in the crotch while in a confession booth. With a Bible. 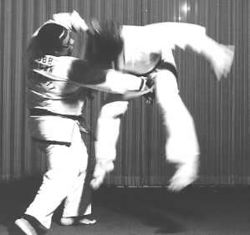 ~ Cue Ball, KXJN in the morning

The film grossed $30 million in its opening weekend, taking the number one spot in the box office. It was immediately hailed by critics and fans alike as "truly brilliant comedy--the funniest movie...of all time!" Test audiences across the nation burst into hysterical laughter as scene after scene of whimsical, goofy testicle-pummelling unfolded before their eyes. "That was a work of God damn genius!" shrieked one man as four-year-old children rolled around in the aisles before him, "The way he clutched his gut and wailed in agony...totally fuckin' hilarious!" The film received a rating of 96% (positive) on the movie rating site RottenTomatoes.com, putting it above Forrest Gump and making it the highest reviewed film on the site of all time, aside from Sex Seafood. It has also been selected for preservation in the United States National Film Registry, deemed as being "culturarly significant, because like, almost everyone has been kicked in the balls." The film was initially rated R, not because of the violence, but because in one scene, a billboard could be shown with a smiling man on it that was deemed "despicable homosexual propaganda" by the MPAA. After the shot of the billboard was removed, the film's rating was dropped to G, and it is now shown in most preschools, along with A Clockwork Orange.

Look up A Man Getting Hit in the Crotch 800 Times in Undictionary, the twisted dictionary

After to the tremendous success of A Man Getting Hit in the Crotch 800 Times, Wallace Termite announced plans to start an entire film series of sequels, each of which would feature a different part of the man's body being clubbed. The first sequel will be A Man Getting Hit in the Head 800 Times, which is perhaps one of the most widely anticipated sequels of all time. It will be followed up by the potentially less humorous A Man Getting Hit in the Epiglottis 700 Times. Though Termite is convinced that this third film will be just as hilarious as the others, some fans beg to differ. "I hate the concept," says Marcus Flab, operator of the film's official fan club, "I mean seriously, a man getting hit in the epiglottis isn't nearly as horrifically violent as a man getting hit in...say...the spleen, the liver, or the nose. And why 700 times instead of 800? 700 isn't nearly enough to meet demand. If this series is to compete effectively, Termite's gonna have to step it up. Perhaps some mutilation. Now THAT would be hilarious." Along with sequels, Termite plans to release some official A Man Getting Hit in the Crotch 800 Times merchandise, including coffee mugs, action figures, umbrellas, and all manner of other charming items.

Featured Article  (read another featured article)
Featured version: 16 September 2011
This article has been featured on the front page. — You can nominate your favourite articles at Uncyclopedia:VFH.