From Uncyclopedia, the content-free encyclopedia
Jump to navigation Jump to search
Dragon Worrier

Descendant of Erdrick, listen now to my words.

It is told in ages past that Dragon Worrier was a console role-playing game for the Nintendo Entertainment System. It was the grandfather of the entire RPG genre. You know "World of Warcraft"? It's based on this.

Descendant of Erdrick, listen now to my words.

It is told in ages past that Dragon Worrier was a console role-playing game for the Nintendo Entertainment System. It was the grandfather of the entire RPG genre. You know "World of Warcraft"? It's based on this.

I'm glad you understand. I really had no way to explain it to you without just repeating exactly what I had just said. Honestly, paraphrasing is really not my strong suit. I guess if I had to describe my leadership style as King of Tantegel Castle, I'd say that it encompasses saying eight things over and over again, walking in place while raising my scepter up and down, and whenever there's a major crisis, sending out a single worrier to deal with it. That worrier is thee, BUTT.

Now, BUTT, thou must help us by going forth and being very worried by dragons. Be worried about green dragons, and blue dragons, and especially the Dragonlord. I want you to really stay up nights worrying about that guy.

Take now whatever thou may find in these Treasure Chests, although I warn you that it is utter shit. I don't even know why I keep this stuff in the throne room. They keep telling me the warehouse is almost done being renovated.

May the light shine upon thee, BUTT. For now it is time to play... 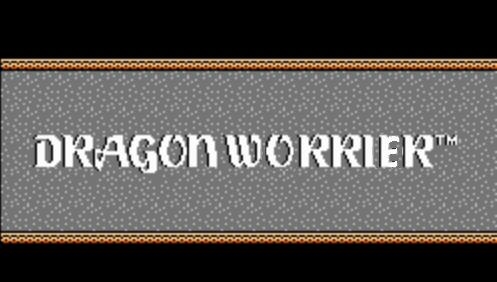 Diary of a Dragon Worrier

So, it looks like the king hath summoned me to Tantagel Castle to break the curse that's settled over the land. And dost thou know what was in those treasure boxes? Some pocket change, a torch, and the key to the front door. I cannot believe he didn't think to provide me with a sword of some kind. He tasks me with the quest of saving the land, and then he giveth me a fucking torch?

Also, I have no idea why the king hast locked himself in his throne room and put the key in a chest. Verily, the king is a strange man.

I spent much of the morning journeying to the town of Brecconary, to see if someone could sell me a proper blade. And, lo, to my great fortune, the first thing I saw was a weapon shoppe. In fact, 'twas one of only two shoppes in Brecconary. The local economy of the town seems entirely dependent on selling weapons and something called "Herb." Stranger still, their only customer appears to be... me. By my troth, who hast planned this economy??

I had a most peculiar conversation with the comely lass outside the shoppe, which I shall recount here:

I learned much in my evening in Brecconary. For example, I learned that the town was called Brecconary, and that the way to buy a weapon is to enter the shop and speak to its keeper across the desk.

The keeper of the weapon shoppe informed me that the king had not given me enough pocket change to afford a blade, so I had to buy a bamboo stick. Canst thou believe it? A bamboo stick! I suppose anyone would be worried about dragons if they had to face them wielding nothing other than a pointy stick.

I also bought some of that Herb. The shoppe was offering a half-ounce for merely 40 pieces of gold. It seemed like a great deal.

On the morrow, I shall smoke a little of that Herb and set off to find a dragon to be worried by.

In sooth, I think I am tripping on Herb. Verily, twas some powerful shit. I step outside the town walls, and do you know what I see?

A giant pile of living slime. I am not making this up.

It had a shape sort of like a raindrop, with a big red smiley face on it. I tried to evade it by sneaking around it, but it bounced menacingly toward me. At least, 'twas as menacing as a bouncing, smiley pile of goo can be.

So I pulled out my pole and I poked it repeatedly. "Poke! Poke!" went my pole. I doubt any bard is going to write an epic about this battle. And then, the slime touched me, and decreased my Hit by 1!!

In sooth, I'm not sure exactly what my Hit are, but when that slime attacked me, I swear I felt my Hit decrease by 1. It was not a pleasant sensation.

The strangest thing was, after I defeated the slime, I found a coin inside its body. One gold coin. For what conceivable reason would the slime be carrying a gold coin? Did it plan to ooze its way into Brecconary and try to buy a torch? What would a slime even do with a torch?

Mayhap I need to lay off the Herb.

I have spent the last five days wandering around Brecconary and stabbing living slime with a stick. I never thought my life would turn out this way. When I was but a lad, I thought I might be a goatherd when I came of age. Or a chandler. Or a tanner, or miller, or mason.

I never thought I would be a "stick-stabbing guy." If I were to perish today, my tombstone would say "Here lieth BUTT, stabber of slime." And why is my name BUTT? I cannot understand why my name is BUTT.

A curious thing happened yesterday. I stabbed my ninetieth slime to death, and suddenly, I knew how to cast the spell of HURT. That's right: a magic spell just popped into my head. A spell called HURT. When I cast it, it causes living drops of slime to hurt.

I fear that I am losing my mind.

Okay, you know what? I'm out. I'm done. No accolades are worth the kind of grievous worry this quest has caused me.

Here's what happened: I came across some ruins on my journeys this morning, and I stepped inside with some trepidation. I was worried, thou seest, that there might be a dragon inside.

So, I'm walking around on these giant red bricks, and do you know what I see? I see this:

I ran in one direction for several hours, and then I had to change my pants. I fear that they were not their normal shade of bright blue.

Just look at that thing!! Look upon its sharp pointy teeth! Look upon the strange way its bright green back suddenly turns to yellow around the stomach area! Look upon its weird chicken feet with green toenails!! Something about that dragon is not right at all. I can't even figure out how it holds the nail polish brush to apply the green to its toes.

Well, King of Tantagel, I'm officially very worried about dragons. I suppose my quest is complete.