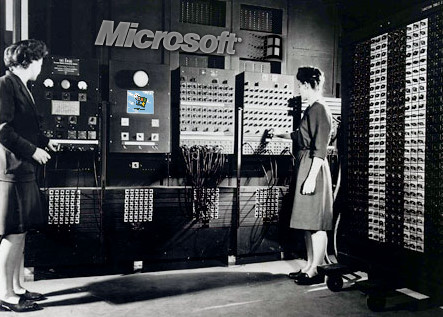 The world before Windows 95 came was only black and white.
“Oh fuck! Well.... You cant eat a window, Eh? You can? Crap.”

Where do you want to go today?[edit]

Not far. At least, you shouldn't want to, because Windows does not have double-glazed glass, and acts as if it is a glass pane stuck halfway in between a busy road, with 2 men holding each end with their shoes glued to the ground. This causes Windows to crash often, and leaves you in a bloody pile on the cold pavement, with two bleeding glass carriers lying on top of you. It's not pretty.[1]

Microsoft devoted years developing Windows 95, hoping to show people of the 1890's that computers were the wave of the future, and to convert them to the new digital age. It devoted much time, energy, and money into the development. In fact, at the time Microsoft alone owned the license to color, which in itself caused so much excitement it was almost a drug. Bill Gates is famously quoted as saying, "Computers are the future - in a matter of years all your social interaction, grocery shopping, and even medical care will be provided with the help of computers. Convert or die."[2]

Unfortunately Windows 95 did not catch on with the wider public because it was incompatible with most home typewriters of the time and was expensive. Windows 95 was fast replaced by Windows 98 in 1898, the first OS to feature typewriter compatibility which could rival the Macintosh.

Windows 95 introduced the brand new Blue Screen Of Death which was much more comprehensible on what the problem was on your computer. 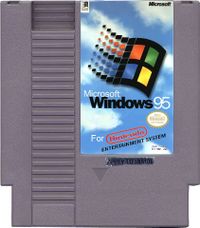 Windows 95 for the NES console.

Microsoft gave one last push to their beloved 95 system after many nuclear accidents in their headquarters. Re-released in 1995, the new "Ultra Windows 95 Turbo X: The Grand Master's Future" was deemed an operating system that was so perfect, it was considered by many to be a god; its holy book the user guide, its prophet Dr Bill Gates, and the error messages, signs that it exists. It was an operating system that was worshiped on a global level for two years. Microsoft had finally done one thing right and it was such a marvelous operating system that even Steve Jobs drank his piss when he tried it. Finally. 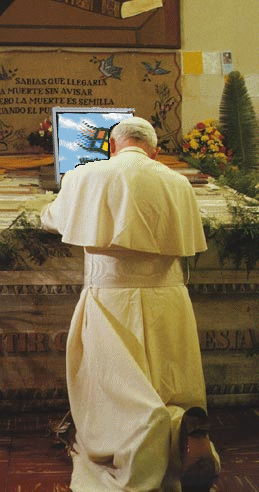 One of Jesus's friends Praying and using the holy system for his own pleasure.

Many held services with their Windows 95. It often happened in personal enclosures. Perhaps somebody was searching the Internet in hopes of enlarging their penis. Perhaps they were typing up a report about why marijuana should be legalized for school. Or perhaps they were making a Power Point presentation explaining to their company "How to Use Strategical Demographics to Better Promote Positive Attitudes." But whatever it was, the experience was simply magical.

The venerable Windows 95 met its demise when its security patches no longer fit on the storage devices of the time. With miraculous conception, Bill Gates attempted to bless the masses and Windows 98 was spawned. The magic the previous system had provided was instantly lost. People realized how stupid it was to worship an operating system. So they went and worshiped Google instead.

There has been many rumors that Microsoft would release a new version or remake of Windows 95 for next gen consoles. Some industry insiders claim that "Windows 95 DS" is in development, though no Microsoft employees have confirmed this. Briefly, on May 3 2007, Microsoft listed on its website that "Windows 95 RPG" was being released for Xbox 360, though this was quickly taken down, and Microsoft officials say that it was just a joke that some guy in tech had done. Joke? Or maybe a clue...

Many people believed that the Windows 95 name came from the ninety five minutes waiting that the user had to endure each time the system is booted. Others believed that the 95 referred to the number of times that the system had to be rebooted per day. Actually, the name Windows 95 came from the $95 cost of buying a license in 1895. Adjusted for inflation, today that would be about $280,900. The 1995 release adjusted for the inflation, and most people had to take out mortgages on their homes to purchase the required computer hardware upgrades needed to be able to get the system to run at all. 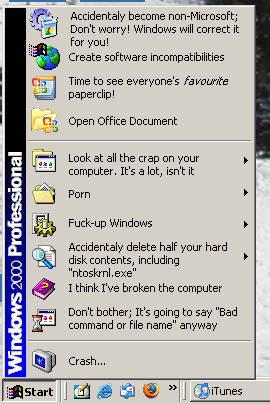 The introduction of the start menu, revolutionized Windows

Where do you want to go today? A week old pile of rotting crap? Well you're in luck! The sole purpose of Windows is not exactly to go anywhere, but rather staying safely at home watching loading bars slowly approach but never quite reach 100%. Despite this being the 95th version of the operating system, most problems were still unaddressed, for example any attempt to access troubleshooting files automatically shuts down the computer and listening to any music files sets the screen on fire. Also, in order for the system to operate, the floppy drive needed to be replaced with two pieces of cardboard and a whistle. Of course, this gives the user an insane desire to just get out of Windows and enjoy life with their friends, but quickly they'll get into trouble when they are constantly crashing all the jars and getting big blue hallucinations with little white letters in it all the time. They may also experience frozen time-warps, blocks, memory leaks, near-death experiences as known as "fatal errors". This is due to Microsoft's fundamental goal with designing the system, you can leave Windows 95, but Windows 95 can never leave you.

It is possible to modify (aka hack) a Windows 95 to spare yourself from the experiences above illustrated. Most commonly this is achieved by smashing the screen with a hammer, creating a vacuum within the system, and lighting a fire within the vacuum using a Nitrate solid. By repeating this process a sufficient number of times, somewhere in the thousands, one can eventually create a time warp and be able to install the 98th version of the system, time-jumping through 96 and 97. If this occurs, don't worry, I warned you that these things would happen.[4]

Due technical reasons, this note is here. The current name of the article could be Win1897 OEM Service Release 2.5 on 30 diskettes, but it's too long and way too uncool. Have a missing page, please.