Microsoft Access is Microsoft's answer to the classic program noir Colin Brett-Leomen's Have Fun With Accounts . 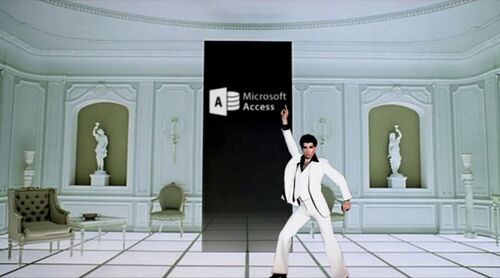 Colin Brett-Leomen was a troubled man. His wife had left him to engineer a coup d'état in Rhodesia, his son had created a time paradox, causing Colin to flicker in and out of existence, and he had a mustache. The only joy in his life was his business, 'Brian's Brushes', which did sell a few brushes, but mostly dealt in insurance.

However, his secretary, a witty, cultured chimpanzee named Chocolate, had a habit of folding the vital documents of his business into paper airplanes and holding air battles with the ocelot intern from an adjacent building. Despite the damage this was causing to the company, Colin put up with this, until one day, when looking for a important letter from the AAAAA, he found Chocolate folding it into a perfect scale model of a Messerschmitt Spitfire M-80. He knew that Chocolate would never give up her games, so, unable to rely on paper records, he decided to use computer technology as a novel way of processing the company's information.

After 17 months of virtual non-stop programming (Colin worked for 20 hours a day, rarely eating; Chocolate administered vitamin B12 shots to keep him alive), Colin Brett-Leomen's Have Fun With Accounts - Version 1 was ready for use.

Colin's new program was so good, that he implemented it across his business; it gave him a competitive edge that transformed his company into a business empire that owned Poland and controlled 70% of the drugs trade in Mexico.

Demand from other businesses made Colin decide to make his program commercially available to other companies. Despite the fact that it only had three commands, 0, 1, and Off, the program sold 18 billion copies. The unfeasibly high sales can be attributed to the fact that many people from the distant future came to purchase it; they claimed it was a 'good source of protein in an overcrowded world.'

It's stylish use of black and white graphics gave it cult status among program noir fans. Program noir was similar to film noir, except with computer programs, not films.

Version 1 did have its flaws, most notably it was very rude to women, black people, and homosexuals, and so Colin worked on a second version. Version 2 was unveiled in a huge opening ceremony in Chicago. Colin pulled back the tarpaulin to reveal a tangled mess of a program, full of complicated linked tables, boolean queries, an exhaustive range of esoteric functions and commands, relational entries, an unintuitive navigation system, false error messages that appeared just too confuse and other complications. To make matters worse, to operate the program, one needed to understand Latin.

However, the program had some commercial success, especially among the Jewish community, who thought it was a good way of giving their children the skills needed to secretly take over the world.

Work began on a new version of the database program. By this time, Colin was increasingly heeding the will of the dark side of the force, and declared himself 'Harsh Brett-Leomen, Evil Emperor of Antarctica.' He took on an apprentice, a naive young whippersnapper named William Gates, whom he taught the dark arts. Will, Colin, and the ghost of Greek philosopher Plato (Colin had learned how to raise the dead) worked together on Version 3.

All that we now know of version 3 comes from a demo that was released; it promised to be able to 'answer any question in the world ever.' Of course the demo could only answer questions about wood, but the world eagerly awaited the complete Version 3.

Unfortunately, Version 3 was never completed. William Gates killed his master in his sleep (Colin was asleep, not William), and the project was never finished. Although Colinbrettleomenicide (killing of Colin Brett-Leomen) is now perfectly legal and in fact encouraged, at the time it was not, and, to ensure his safety, William Gates cunningly changed his name to Bill Gates.

How an idealistic young farm boy from Kentucky became Bill Gates, dark lord of the Microsoft empire, is a secret known only to a few. However, Bill proved to be quite a nice dark lord, using the light of his new OS, Windows, to bring hope and joy to every corner of the planet.

Knowing that the people wanted a database program that wasn't tainted with evil, Bill, along with his team of programmers and designers, of all creeds and colors, worked on a brand spanking new program. It promised to 'unite all of mankind under one format.' On 11th November, 1998, Microsoft Access was released to a war-torn planet.

MS Access allows users to easily and transparently store large amounts of information. The proprietary algorithms used by Microsoft ensure that the Access database will inevitably expand to the cube of the size required to actually store the data.

Included in the software package is Visible Basic for Appliquashuns -- essentially a feature-reduced subset of the famous padded undergarments which make C++ programmers hemorrhage from the eyes.

Access is actually an acronym for Automated Command & Conquer Electronic Support System, and was designed for implementation in communist countries, hereby resulting in an infrastructural breakdown due to it's disastrous scalability features. Unfortunately for Microsoft, all communists use Open Source.