Jimmy the Shoeshine Boy told me you could find some more about Film Noir here.

It's often hot out in Frisco, that's if you can see out.

It was a hot day. It's always hot in Frisco. Except when it's raining. Or snowing. Or hailing. I had a pitcher of juice and a blank screen to work with. Some jock had slipped me fifty bucks to write his media studies report on film noir. I thought it was easy money. But after staring at a blank screen for five hours, I can see why the buck had been passed to me.

He wanted to know the facts and he told me I was the man to get them. Maybe because he knew I was good, or maybe because he had flushed my head down the toilet last week and knew he could easily do it again, I don't know. Whichever way we got here, it just left me, a screen and some juice.

I moved slowly to the bathroom. I splashed water on my face, it felt like a dip in an cool, cool stream, just what I needed to get my creative juices flowing. I was drying when I saw a woman entering my room. I threw the towel down and returned to the door. She was sitting on the chair opposite my desk. That was Buddy's chair, and it had been empty since he'd gone. She was a hot tamale alright, the kind of broad that could get a guy like me into trouble. Platinum blonde hair, hourglass waist and legs that never seemed to end. Shame she was my mom. 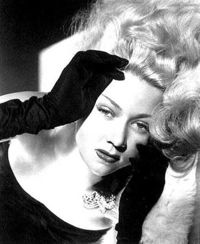 "That's Buddy's chair."
"Funny," she said "I don't see him sitting on it." She pulled a cigarette from a silver case and fitted it to a jade cigarette holder, and lit it using one of my fragranced candles. She drew a breath through it that seemed to suck all the air out of the room.

"What do you want?"
"The school librarian phoned, saying she has some information for your assignment. You can get me some milk from the store too, if you're heading out."

She rose from the chair. The sweat glistened on her chest and thighs, and her floral dress was clinging to her. Shame she was my mom. She moved to the door, arching her back against the frame.

I stayed looking at the frame after she had slunk out into the corridor. The jaunt out would do me good, clear my head. The smoke and perfume clung to the air like an inner city smog, despite me lighting another candle. I packed my bag and decided to hit the street.

The heavy wooden doors slammed behind me. They were heavy enough to block the heat from the street, and the dust that came along with it. The room was cool as the other side of a pillow, but thankfully not as sticky. The antique shelves seemed to groan with fat, lazy books filled with knowledge of subjects that no one would have knowledge of. I straightened my tie, and moved toward the counter.

The short librarian looked at me with disdain.

"She's in outer space."
"Excuse me?"
"The Outer Space section... next to Crime Fiction."

I walked the 'round the cases, eyeing the spines of dusty books as I went. She was there. Poor kid. I watched her stack shelves, she seemed happy...not as happy as when Buddy was around. She loved Buddy, and I would have to learn to accept that. His being gone had broken her in two with loneliness. I considered showing her the videos I took of them when I was hiding in the bush outside her window, but I don't think she'd have found comfort in them...probably would have had me arrested.

Her arms felt like a vice around my neck. I thought of dead kittens to maintain my dignity.

"Glen, someone said they saw Buddy. They left a note at the desk saying they saw him by the corner store, in a red Corvette with a white flash. They said there was a dent in the wing of its passenger side, a green tree air freshener hanging on the mirror, and the plate was DMV0582. I just wish they could have been more specific."

They didn't need to be more specific. I'd seen that car before, at the gym when I'd been planting surveillance cameras. I knew that that should be my next stop if I was to find Buddy.

"Sandy, what did you find out about Film Noir?"
"Oh, Wikipedia said it was a style of film with a narrative that is centered on a lone figure in a quest to achieve redemption, righting previous wrongs and throwing financial reward away for a more personal one. This narrative can often be in the form of a protagonist voice-over, a flawed, but honorable character. Often shot in dark tones with use of shadow is predominant, with intricate plot lines. I hope this helps."

I couldn't quite make out the tear on her cheek; the shadow of the venetian blinds made it difficult to see. I left the library. The essay was at the back of my mind now. I could find Buddy, and that was a much greater payoff. 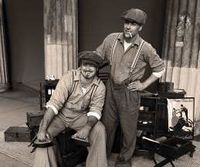 Jimmy the shoeshine boy is a vital resource....

I drew blanks on the car at the gym. I walked to the store, the hot air lapping at my skin like a hot...dog. The man at the counter was reluctant to talk but I knew I could garner the information I needed with a little 'liquid persuasion'...

I told the ambulance driver the whole story. Who knew teenagers reacted so badly to alcohol? Before he passed out, the clerk had told me our Corvette driver had something of a habit. He frequently bought under the counter sex aids and pornography. I made a mental note, and took one of his magazines (as evidence). As for the owner and the whereabouts of the car, I was a little lost. My next stop was to Jimmy the shoeshine boy. For the right price, Jimmy could tell you where to find a needle in a haystack, and where it had been 'til now. Jimmy's stall was just around the corner. I sat in the chair, and let Jimmy start to polish.

I was in a rush, so I gave him all the money my mom had given me for milk. He counted it and looked down the street.

"It's just 'round the corner, you probably walked past it to get here."

I thanked Jimmy and began to walk around the corner. He had done a good job on the polish too. Shame they had been white sneakers. I walked around the corner and found the car there. I approached it slowly from behind, looking for signs of either its owner or Buddy. The strap of a hold-all had got jammed in the lock of the trunk, meaning it hadn't shut properly. I knew this was my only chance to track Buddy. I opened the trunk and the black hold-all and quickly hopped in. I shut them both behind me, ensuring everything looked as it had before. I knew I had a long wait ahead of me, so I began to ponder the case so far...

When I woke up the car was moving. I knew I still had a while to linger, so I thought out my eventual plan of attack, how to jack-in-the-box the perp, when he opened the bag, the man who'd kidnapped my best friend...

When I woke up the car had stopped, slamming me into the wall of the trunk. The trunk opened, and I heard a man singing outside. I was hoisted in to the air. I shifted my weight to make the lifting easier; from the height of it I estimated he was around six foot, and took that into account for my surprise attack. He walked along for a few steps, then waited. His gruff vocal tones were joined by the delicate ones of a woman. I felt a short lift as he stepped over a threshold, and further into the house. More conversation and further short lifts as he climbed the stairs. I heard different noises, amorous noises. I felt a little aroused, before I hit the floor like a sack of spuds. The stale iron taste of blood filled my mouth; the fall had caused my retainer to cut into my lip. I felt around in the darkness for something to stem the bleeding. I found no cloth, just some PVC material. The talking got louder; clearer.

I knew he was reaching for the bag. I tensed and got ready to draw retribution on the man who'd kidnapped Buddy. The zipper came down. Light flooded in and my eyes started to sting. I saw an outline, then features. It was the jock. His face showed his stupidity and his surprise, mouth agape. I didn't care how many swirlies he would give me, I was working for my friend. I looked over to his female companion. Her bosom seemed to be spilling over, as if someone had poured her into that leather padlocked dress, and she'd forgot to say when. She had some fluffy handcuffs between her teeth and her spiked heels held her long slender legs tight and firm. Shame she was my mom.

"Glen, what the hell are you doing?"

I was angry (and still a little aroused).

"Where's Buddy?"
"Oh you and that stupid mutt! He's at the kennels, and you should be researching that stupid project I made up for you at the library! Now GET THE HELL OUT and leave me and Rusty alone." 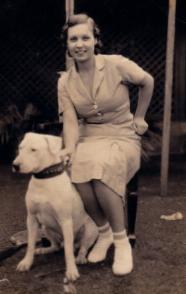