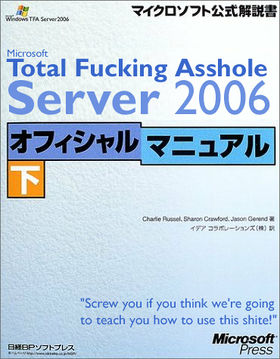 Several authorized publications have been released in a failed attempt to assist IT Managers with TFA Server 2006, all of which have proved to be as unhelpful and inherently belligerent as the software itself.

“Total Fucking Asshole Server 2006 is the first in a new line of programs that, in addition to being incompatible with all current standards, insults your masculinity and inability to drink alcohol. It is a quantum leap in Self-Esteem Reduction Software.”

“I feel I can retire from Microsoft with the joy of finally having released the software that I, and Microsoft as a whole, have worked towards for thirty years.”

Whereas previous versions of Windows only made their users feel stupid and useless in a passive manner, Total Fucking Asshole Server advances software engineering to the next level of the state of the art: active degradation of the peon in front of the screen. You love it, you worm.

TFA 2006 is famous for its finicky nature, its complete lack of backwards compatibility (or indeed of any compatibility at all), its esoteric, difficult design, and its curt, snippy error messages and manual. In fact, the manual is only two words long, a terse recommendation to "Fuck off." Calls to Microsoft for technical support garner little success and routinely result in massive bouts of laughter greeting you from the other end of the line. Sending regular mail will get you your letter returned, though with the addition of quantities of pubic hair. 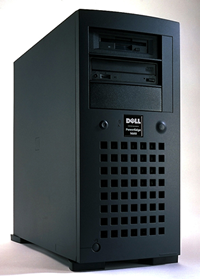 What a fucking asshole.

TFA 2006 has numerous functions unique to it alone. Other servers are far behind in the arms race when it comes to features such as:

TFA Server 2006's advanced Artificial Intelligence programming makes it the first in a line of servers with the ability to communicate with other programs not in arcane computer languages, but in basic (or base) English: 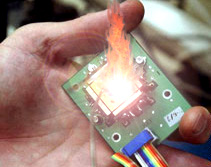 When pressed about the habit of TFA Server 2006 to spontaneously light things on fire, Bill Gates famously responded "That's not a bug."

TFA Server 2006 has the unique ability to create and implement new, freeform error messages completely on-the-fly. Instead of providing the user with esoteric technical jargon, TFA 2006 has the ability to display messages with no actual relationship to any error, real or imagined:

Truly revolutionary computational power is on display here. With any luck it will soon cure cancer or else devise a better means of stealing your girlfriend. 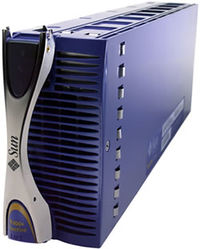 Don't let the pretty exterior fool you, this guy's a bastard; I mean, he drank my last fucking beer!

Total Fucking Asshole Server 2006 is known for its packet-spying, an almost voyeuristic look into the web habits of individual users. TFA 2006 gathers and stores this data and sells it to the highest bidder and automatically e-mails your web history to all those listed in your e-mail Address Book. Better come up with a good story as to why "Totally Geriatric Sluts" is on your favorites list. TFA 2006 also has a pioneering "Find and Replace" feature, an example of which would be a user searching for food recipes through Google. This person might might type in "pizza recipes", to which Total Fucking Asshole Server 2006 would respond "I see you've searched for food recipes. You don't need these. You're fat."

This type of behavior has lead to many complaints, complaints which have been shrugged off in a typically flippant manner. Attempts to reason with TFA 2006 result only in further belligerence and possibly violence.

The Random Crime Implicator will leave traces of terrorist plots, child pornograpy, illicit affairs and drug addictions on your computer at no extra cost. In an attempt to liven up your boring, dreary life TFA 2006 can get you hooked up with the Mafia, the Russian Mafia, the Gay Mafia, or any other variant of the Mafia thereof. With its new MySpace implementation TFA 2006 can post onto the web, with ease, videos of mailbox bashings, vandalism, and acts of arson with your face superimposed over that of any random teenager. Time to dust off those track shoes and relive your heady past by getting chased by the cops for nicking a candy bar and exposing yourself to an old woman. It'll feel just like yesterday! Which, depending on your circumstances, it may have been. 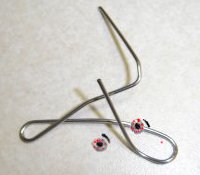 ... fuck that shit, I swear what I vomited into was a fucking toilet, not no goddamned washing machine ...

TFA Server 2006: I see you're writing a cover letter! Why not write a suicide note instead?

TFA Server 2006: You seem to be writing a love letter. Don't bother. No one loves you.

TFA Server 2006: Your paper is significantly lacking in ethnic slurs. I'll go right on ahead and add some for you, kike.

As a matter of fact, TFA 2006 Productivity Degrader aided me in writing this article. Also, it aided me in breaking up with my girlfriend, even though I didn't want to.

Total Fucking Asshole Server doesn't work Mondays. Or Fridays. And even when it shows up, sometimes on Wednesdays, it's usually drunk or hungover. With a typically surly greeting of "Fuck off", it saunters into its designated job routing internet traffic with a typical gusto, that is to say, none.

Linux Server: Christ, I might be a surly bastard, but at least I fucking work for a living.
TFA Server 2006: Ahh, fuck off and run Mac OS X. Douche.

The Al-Qaeda's of the technological world.