The "I survived/died from cancer" documentary genre was highly influential in the late 1990s and early 2000s. Many actors at the time started smoking specifically in order to secure themselves the ability to make a cancer movie in their later years.

The rise of cancer porn[edit]

The alliance of the might of the adult entertainment industry and the cancer treatment industry formed an economic powerhouse that was nigh unstoppable and is regarded as the prime driver of the dot-come-bubble of 19100. The reports on the subject produced by the Kinsey-Mayo Clinic are generally credited with helping the Western world accept the rightness and beauty of the sexualisation of carcinogenesis.

The cancer-porn industry was, of course, famed for consistently being on the forefront of new technologies. One of its most successful initiatives was Peer-to-Peer Metastasis ("the Napster of cancer"), where enthusiastic individuals on the Internet set up carcinogen-sharing networks to share and spread their home-generated toxic samples, produced using cheap new technologies such as microwaves and tobacco. Individuals went about their daily lives wearing personal cancer players, intending to hook up with other sexy cancer enthusiasts, identifying each other by the classic trademark white earbud monitoring electrode pads. Personal cancer players were particularly popular in Europe for urogenital and eye cancers.

Apart from the crass, base, exploitative mass market field of cancer porn, with delicately beautiful Albanian slave girls being tied up in London basements and forced to consume vast quantities of carcinogens before gargling copious irradiated cock on video in the forlorn hope of getting their passports back, the Guardian-reading university-educated upper middle class also produced many much-admired works in the field of cancer erotica. The difference being that the women gargling copious irradiated cock had posher accents (bar the alluring handicaps to their enunciation caused by missing teeth and removed bits of jaw) and the photos were in black and white.

The Catholic Church passed an encyclical encouraging the use of cancer in a proper healthy family life, since condoms do not hamper its spread.

The decline and fall of cancer porn[edit] 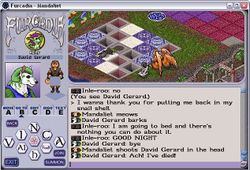 "At least we're not furries" — slogan of the Paedophile Information Exchange. With cancer.

Until they all died out from not breeding enough to replace themselves as they fell to cancer. Except the child molesters, who got enough of the kids (too weakened by cancer to get away) knocked up to let the human race race continue. Here's to the kiddy fuckers! They may specialise in raping children with cancer ... but at least they're not furries. Ew, furries.

“I am so going to Hell. And when I get there, they'll dig a new Hell so they can throw me out of the first one.”

~ User:David Gerard on writing this article