The Sexy Lives of Mammals 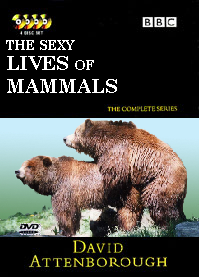 For those without comedic tastes, the self-proclaimed experts at Wikipedia have an article about The Sexy Lives of Mammals.
“Mammals are so beautiful. I wish I could have sex with them all”

The Sexy Lives of Mammals is a 2002 BBC nature documentary series written and presented by David Attenborough. It covers the natural history, especially sexual habits, of the various mammal species, and was the fourth of Attenborough's specialised surveys following his major trilogy that began with Earth: The Sexy Planet. Each of the ten episodes looks at one (or several closely related) mammal groups and discusses the different facets of their day-to-day existence, or sexistence. All the programmes are of 50 minutes' duration, most of which is taken up by animal sex.

Part of David Attenborough's 'Sex' series, it was preceded by The Private Parts of Plants and The Sex Life of Birds (1998), and followed by Sex in the Undergrowth (2005).

Although almost 80, Attenborough was enthused about making a new documentary about mammals, having enjoyed the filming of The Sex Life of Birds:

It was a toss up between a documentary on mammalian mating behavior and mammalian excretory systems. Attenborough himself wanted it to be about the latter for a change in direction, but the series had to compete with Desperate Housewhores, and so the more popular topic of secks was chosen. Attenborough was thus somewhat disappointed to see his vision of The Shitting Mammals turn to poo.

Production of the documentary presented many challenges. In one scene, footage was filmed for the first time of skunks fondling in a cave of bats. Extra protective measures had to be taken for the crew, as it was a very hostile environment. The air was full of ammonia, the main occupants urinated copiously from above, and other inhabitants included flesh-eating maggots and a rattlesnake, which were also filmed having sex.

Big cats that hunt nocturnally, such as lions, leopards and tigers, had never been extensively filmed having sex at night before. But the latest infrared technology revealed that sexual encounters at night take place by similar mechanisms to those during daylight - by insertion of the penis into the vagina. 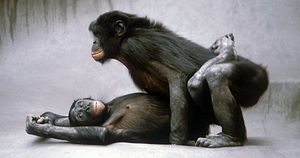 Fuck off David, can't you see we're having a shag?

The series features ten episodes, which largely consist of sex scenes, interspersed with the occasional token scene of a gazelle being chased by a feline predator for good measure. The animals filmed were often visually annoyed at Attenborough spying on them. For example, a bush baby urinated on him from a tree top, while a pair of mating Columbus monkeys gave him the finger.

The first episode in the series highlights how unfaithful animals are to their partners. A social group of monkeys filmed showed a female who would sneak away from her protectors and mate with another male. Male mammals were shown to mate with virtually anything that had a pulse, including other males (q.v. 'Greek love', below).

The fourth episode showed just how eager males are for sex. Whenever a female ibex was unguarded, a male would vigourously try to force himself upon her. One of the highlights of the series occurred in this episode, where sperm whales tried to unload their goods into the vagina of a female whale when it was lying on its back on the surface of the water. Those two meter long penises no doubt stuck in the minds of many viewers, and excited the female portion of the audience a great deal (while leaving them eternally unsatisfied from that day on).

Many mammals have lost their habitat due to human interference, and have been forced to enter cities in search of food and employment. While many animals hunt the streets and sewers for scraps, some have been forced to turn to prostitution to feed their young. Many young female red foxes line the streets of London each night, selling themselves to zoophiliacs like Peter Singer for only a few dollars.

Homosexuality is manifest in almost all animal species, so much so that it's hard to understand how they manage to avoid extinction. This episode surveyed the wide variety of queer animals, much to the annoyance of conservative Christians, who can no longer claim that homosexuality is unnatural (a blow to their favorite argument, the naturalistic fallacy).

In the penultimate episode, males who hold so called 'harems' (such use of which is highly offensive to Muslims, not that anybody cares) were surveyed. Attenborough's awe for the male sea lion with 20 females was obvious (as was his jealousy). Unlike all other episodes, fights between males occupied a good portion of this one. Viewership was also noticeably lower, which is what happens when you don't give the people what they want.

The final episode documents the sex lives of human beings. This is not the same as normal pornography, as the filming was done without the knowledge of those being filmed. Said subjects later sued BBC for several million pounds, which was settled with an out of court payment. At the end of the final episode Attenborough discusses the exponential growth of the human population, and urges people to control their sexual activities. He advocates birth control, and then goes on to discuss other options such as sodomy and cannibalism. Finally, he makes an impassioned plea for eugenics.

Released in 2003, the DVD sold many copies in its first week, mainly to single men visiting adult stores. An accompanying book was written, with exquisite descriptions and color photographs of mammalian genitalia.

As part of the War on Science, the Dutch version of the DVD produced by Evangelische Omroep removed all references to (amongst others) evolution, fossils, continental drift and heliocentrism. The narration by David Attenborough has been replaced by a highly inaccurate Dutch translation, and cuts were made to the episodes. The seventh and tenth episodes, with their evil messages of homosexuality and human evolution, were not broadcast at all on Evangelische Omroep, as nothing could be salvaged from the evolutionist lies. Other sex scenes were not deleted though, as the Dutch love that sort of thing. A translation of this version is underway for Americans, most of whom are similarly uncomfortable with truth.