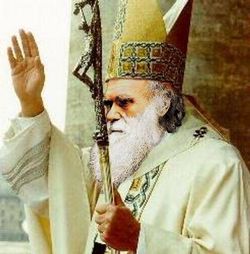 “I covered this war.”

~ Frank West on this war

Background of the War and a Summary of its Causes[edit]

The heathens that are opposing God's Army are spreading dangerous propaganda, which they call "knowledge", to the masses. This information is very dangerous, as it challenges the divine authority of God. The War began back in the 16th and 17th centuries when heathen astronomers challenged the teachings of the church by stating that the Earth is round and that it revolves around the Sun. The righteous Christian warriors put many of these heretics to death, but because of their divine mercy, did forgive those who recanted, such as Galileo. Unfortunately they lost two key battles: the Battle of Heliocentricity and the Battle of Spherical Earth. Recognizing that science managed to take these two territories, the brave Christian warriors retreated to defend the sacred Theory of Divine Creation, their most cherished belief. The War on Science has been ongoing for the past 400 years, but had particular periods when the fighting was most intense. Our brave Christian warriors fight all types of progress, but focus especially on evilution, the world's most dangerous ideology.

This is the period when people first started questioning the divine authority of the Church. The Church doctrine of geocentrism held that the earth was flat, and every heavenly body revolved around the flat earth. The Church took the appropriate measures of burning at the stake any heretic who didn't agree with their doctrine. At the end of this period though, scientists managed to convince large segments of the population that the Earth is round and that it revolves around the Sun. The Church then decided that geocentrism was not actually a fundamental doctrine of the Church, and instead to defend the Theory of Divine Creation as their most sacred belief.

This time period saw the heathen Charles Darwin publish his blasphemous book On the Origin of Species. The forces of good battled the immoral atheists and were successful at keeping most people ignorant about evolution. In the earlier parts of this time period only scientists believed in evolution. In the 20th century though, the Religious Left was losing ground in the War on Science. Significant portions of the populations had begun to accept evolution and the church's power was beginning to weaken. The Creationists were able to hold on to most of the United States though, a bastion of morals and faith. John Scopes was sentenced to death in 1925 for teaching evolution, but his sentenced was commuted to life in prison and he was paroled after serving 10 years. After 1925, evolution began to gain more strength and the Creationist movement lost strength. Soon after Scopes was paroled, teaching evolution was permitted. The Creationist movement suffered a major hit in 1955 when the Pope admitted evolution could be true. The heathen scientists had managed to infiltrate the ranks of God's Holy Warriors. The Creationists finally lost a key battle in 1987, when schools allowed the teaching of evolution and banned the teaching of creationism - just because creationism was a religious doctrine. (The fact that it was complete bullshit had nothing to do with the decision)

The Third War on Science 1987 to present[edit]

The current war on Science actually started in 1987 after the Edwards v. Aguillard case resulted in the removal of creationism from science classrooms in America, but didn't really heat up until 2000, when a creationist president was elected by the American people. The creationists attacked evolution in 1987 but were defeated. They staged another battle in 1999 in Kansas in which they defeated evolution. Creationism, now called Intelligent Design, had found its way back into the classroom under a new name. The Creationists scored a huge victory when Christian fundamentalist George W. Bush took office in November 2000. Under the Bush regime, Intelligent Design has spread to all the United States and Canada, and stem cell research has been successfully banned. The Creationists did lose a key battle in the Battle of Dover in December 2005 when Judge Jones, a traitor Republican, upheld the law that evolution can be taught, and that Creationism by any other name is still the same pseudo-science.

Although the War on Science focuses primarily on the suppression of the heretical beliefs of evilutionists, God's Holy Warriors also work to prevent the horrors of stem cell research which involves killing unborn children, and then placing them in a petri dish to cause all the bad things that happened... ever.