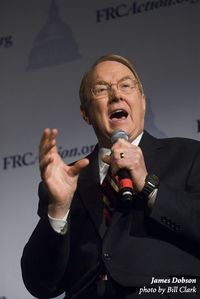 Dr. James Clayton "Jim" Dobson, Jr. (born April 21, 1936) is the unchallenged leader of the Christian American Right Wing Party in the United States, and founder of Focus on the Family, a worldwide organization intent on purifying the innocent and the unborn with Dobson's befouled beliefs.

Orphaned shortly after his birth, Dobson, born Adolf Hitler Jr. in 1945 to Adolf Hitler, a German civil servant and his wife Eva Braun, whose occupation was listed as an "symbol of unfulfilled sexual desire" and "Corpse".

Transported to the United States, the infant was adopted by the Abe Goldfarb family of Skokie, Illinois. However within a week, the Goldfarb family perished in an unexplained fire that consumed their home. Stunned firefighters found the newly adopted infant laying naked, but untouched by the flames, in the smoldering remains for the incinerated house.

Young Adolf was next adopted by the Sean O'Toole family of Chicago, however that familial relationship, like that of the Goldfarb family was short lived after O'Toole, his wife Mary Catherine and 16 other members of the family were found stabbed to death. Police, which named the crime the Crucifix Murders have yet to solve the crimes.

Finally, the infant was adopted by the Dobson family, a protestant family that lived in a white frame house and each and everyone one of them descended from fine Pilgrim stock, took hold.

By the age of twenty, young James Dobson had developed into a repressed and regimented young man, one who had a peculiar obsession with young children. His mother Anne suggested that the young man pursue a career as a pediatrician in order to fulfill his obsession. The plan was under acclaim from Dobson. However, once achieving his goal of being a pediatrician it soon became apparent that Dr. Dobson would need to see children of all races, and unable to even think about touching anything Black, Hispanic or Asian (or Jewish, though it is universaly accepted that only Jews enjoy touching Jews), he left the profession and instead founded the Christian American Right Wing Party in the hope that no-one else would have to touch them either.

Oh, what a friend I have in Jeee-sus[edit]

Under Dobson's rigid hand, the Christian American Right Wing Party has worked to ensure that "this great nation preserves its freedom of religion for White Christian's at any cost."

To achieve this goal, Dobson has called for a rewriting of history, redefinition of commonly used words and phrases and the suspension of logic, science and sex education in the schools.

"We did not start this cultural war, but we not shy away for reclaiming what was rightfully ours before the gays, liberals, Hebrews, feminists and Whig Party came into being."

As part of his Christian American Right Wing Party's platform, Dobson has pushed heavily for the reprogramming of Homosexuals. To accomplish this, Dobson employed John Paulk, a former transvestite, hooker and pathological alternate truth teller to be the spokesman for the program.

"Actually, I prefer spokesperson," said Paulk in an interview in his dressing room in the Ruby Slipper, a drag night club in Madison, Wisconsin. "Does this dress make my heterosexual manly ass look big?"

Paulk's chief job was to sniff out men and convert them to straight, breeding ready men. Dobson has, in retrospect called the plan a miserable failure in that all Paulk was able to do was teach each of the men that was able to bed the Trolley Song.

Call to arms against Obama[edit]

In the spring of 2008, Dr. Dobson called a worldwide state of emergency for the population to be on the lookout for the highly dangerous and lethal Barack Obama.

"He has escaped from his owners and is telling people that he is running for President of these United States,", stated Dr. Dobson on his Tripple K breakfast radio show "If elected, Obama will give every black man in this nation a six-pack of malt liquor, menthol cigarettes, palmade for their hair and all of our white woman!."

"Mary Todd Lincoln is just rolling over in her grave and how she would feel to know that the black Vixen could practicing Voodoo in the Lincoln Bedroom."

It is possible that Dobson has hired a hitman to take out Obama. My spies in the upper levels of Dobson's fascist government say that this assassin may in fact be Sarah Palin, though there is also a large amount of evidence pointing to Laura Croft.