Charles Darwin's violent transformation after Satan gave him the Theory of Evilution in exchange for his soul.

Evilution or Evolution is a heathen belief system that will have you sent straight to hell claim religious fundamentalist fanatics. Anyone who believes this is an intelligent and sensible person but will be labeled as a heathen, homosexual, satan-worshipping, God-hating, terrorist loving, Anti-American. It has been spewed from the mouth of Satanists such as Charles Darwin and Richard Dawkins for almost 150 years and has infected the minds of most of society's youth. Evolution is the reason for abortion, teen pregnancy, homosexuality, and gun violence. These problems will continue even if evolution ceases to be taught and may even get worse because people will be more ignorent but conservatives claim that these problems will be solved if evolution stops being taught.

The heathen Charles Darwin as a boy in school. Darwin was not a high achieving student. He was kicked out of theology school, so he decided it would be his life goal to destroy both religion and society. 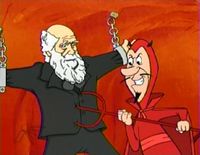 Charles Darwin now spends his days rotting in hell because of his Satanic beliefs.

Unfortunately most of the judges in the United States have little sympathy for these Bible-believing parents since they probably understand the simple fact that a theory is a fundamental process or a relationship that is universally accepted as valid everywhere in the known universe. An extreme left-wing judge who was appointed by the normally politically moderate Republican party has struck down the law requiring God's Truth to be taught alongside evolution. Judge Jones is a reasonable, intelligent man, despite being a Republican, but the religious wing nuts claim that he is a dangerous atheist fanatic who believes in teaching children that God doesn't exist and that they can do whatever they want. The President of the United States, George W. Bush who resembles a chimpanzee and is actually used by scientists as proof of common ancestry with apes disagrees with Judge Jones' highly controversial but correct decision to keep God's truth out of the classroom. The atheist, God-Hating Democrats have since seized the House and the Senate so President Bush will be able to do little to stop them from taking religion masked as science out of the classroom. 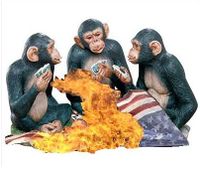 The extremists believe that Democrats would have us all reduced to nothing more than godless, flag-burning monkeys...who also play poker.

Evilution has been repressed and combated by religious officials for thousands of years. Anyone who believed in evolution would be brutally repressed and unjustly punished. Starting in 1859 though, evolutionary theory began to gain acceptance and, in the minds of many religious fanatics, society began to go to hell in a hand-basket. Charles Darwin published his Satanic Verses: On the Origin of Species and persuaded millions of people around the world to become atheists. Creationists have made the inaccurate claim that beastiality is a belief held by many evolutionists, and that Darwinism also has an offshoot religion, Pantheism, which according to these ignorant creationists encourages people to worship and possibly mate with chimpanzees (see pansexuality). Brave but misguided Christians such as William Jennings Bryant, Matthew Harrison Brady, and George W. Bush attempted to stop the teaching of this so-called Satanic religion, but it was too late. By 2006, over 75% of the world's population and almost 3% of Americans believed in evolution. Darwinism has taken over, and many religious extremists believe that unless people begin to believe in biblical literalism again, an angry, vengeful God will destroy the planet.

Approved by the Kansas State Board of Education
This page meets all criteria and requirements for use as teaching material within the State of Kansas public school system. It consists of facts, not of theories, and students are encouraged to believe it uncritically, and to approach alternatives critically.
Retrieved from "http://en.uncyclopedia.co/w/index.php?title=Evilution&oldid=5937867"
Categories: