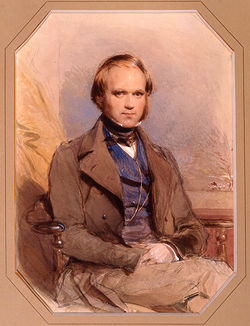 You say you want a devolution well, you know... We all want to change the world. Oh, that's the Beatles Ok, anyway...

Devilution (also known as evilution or by it's politically correct name evolution) is an ancient religious belief invented specifically for the purpose of not having to face reality and submit to the Christian God that, deep inside, all non-Christians know is real. And if someone had the audacity to say that the Christian God was not real, they were forced by the church to play Doom .0068.

One day, a young Charles Darwin picked up a bible and began looking for a good page to rip out and roll a doobie with. Suddenly, his eyes widened with awe and fear at the things he read. Darwin knew for a fact that every last word in this book was true because the book said so and also he just had this gut feeling that he was right and everyone else was wrong. Darwin however, being the critical thinker he was, wanted to ensure he was not jumping to conclusions, so he proceeded to pray about it for the next 26 seconds, and then concluded that he was indeed correct. This was because he prayed to God with a sincere heart, so if he was wrong, God definitely would have told him so.

The new Darwin, plagued with this new guilt from his lifestyle of Pokemon, Monday Night Mahjong, and reading Harry Potter, desperately sought out any possible excuse he could find to free his mind from fear of getting The Thunderbolt. Darwin had already spent four months of his life training his level 92 Mewtwo by beating the Elite Four upwards of 600 times, and was not willing to erase his file for Jesus.

Then one day while Darwin was playing Pokemon on the crapper, it hit him - people can evolve just like Pokemon do, and there is no god in the Pokeworld, so there is no god here. Inspiration had struck, and evolution was born. Darwin then designed evolutionary branches of every creature he could think of, even adding in some of his own made-up pre-historic creatures simply for the lulz. This evolutionary chart included LVLs at which each aminal evolved.

Evolution was well received by the general public for many many years, especially when Pokemon was at it's peak. But when the clever Religious Right dubbed it 'Devilution'[1], it took a nasty fall as it was now cursed with a new Satanic stigma. J.K. Rowling brilliantly cashed out on this with the release of Harry Potter (aka Satanism for Kidz), essentially single-handedly saving Devilutionism.

It was once believed that Darwin finally erased his Pokemon file on his death bed, but this turned out to be a rumor started by Faux News.

Q: "OMG. If people evolved from monkeys, why are there still monkeys?"

My god. i never thought of that. And maybe some greater good creted us to evolve and just be here and destroy everything, maybe somehing felt that it had to create something so small and yet pestering to destroy al living shit.

A: Like Clefairy and Nidorina, monkeys require Moon Stones to evolve. And I mean hey, these things didn't just grow on trees, you know? There simply weren't enough to go around. Any more brain-busters?