Sam "I won that debate against Chomsky" Harris is a bear of a man, with a mind of unparalleled genius, whose august presence on the internet makes The Discourse that much more civil and rational and smart. Sam Harris is best known for never losing an argument online, and solving all of the philosophy using logic and facts. Before Sam Harris published his book The End of Faith in 2004, no one had thought to use rationality and reason to explore philosophical ideas: philosophy hitherto Sam Harris was made up mostly of pussy God lovers like Søren Kierkegaard who believed in fairy tales because they weren't rational and logical and right about stuff like Sam Harris is.

Today Sam Harris has become a light, shining effervescent in a world dimmed by the evils of Islam and people who disagree with me. Sam Harris has written many books, very long books with little to no pictures, filled with great ideas. Sam Harris has appeared in the prestigious TED talks, where he speaks in a suave and bookish monotone, dispensing his wisdom the way a sprinkler dispenses the succulent water to the hungry hungry grass. Harris has also founded the "Nuke the Muslims until their bones are glass" school of moral philosophy.

For those without comedic tastes, the so-called experts at Wikipedia have an article about Sam Harris.

Sam Harris was born into this reality like any other rational thinker: pale,[1] wrinkling, writhing, and beaming with potential. He emerged from the flesh cocoon of womanhood into a world chained by anti-intellectualism and its heralds, who are called priests or imams (but mostly imams). As his infant body grew into toddlerhood, he learned that his mission in life was to dispel untruths, and shed light on the truths hidden by the bad men. As a child, Sam Harris excelled at sports, the arts, and not believing in God.

As a freshman in Stanford University, Sam Harris invented the drug MDMA and took it many times. Sam Harris believes that the drugs he took in college helped to expand his thinking, and opened his mind to the idea of an inflexible universe governed by objective and immovable truths. Drugs are, of course, for smelly people, and Harris selflessly elected to uncover the mysteries of the universe completely sober.

In his second year, Harris left Stanford and headed to India, to argue the nature of reality with Buddhist and Indian monks. He meditated daily and learned all he could from the learned brown men for whom he held a patronizing appreciation. He quickly outgrew their backwards teachings and flew back to America to tell everyone that religion was, like, full of shit. Harris returned to Stanford and acquired a Bachelor's Degree in Philosophy, despite not reading any of the texts required of him by his professors. Sam Harris had independently developed all the known philosophical teachings and beliefs in freshman year, and had one by one refuted them all.

After having conquered philosophy and exhausting all its possibilities, Sam Harris decided to study a subject very close to his heart: his brain. He went back to school, to the prestigious UCLA, and learned all he could about the brain. Many philosophers of the past have bloviated about thinking and thoughts, but none before Harris had even bothered to scientifically study the brain and what it thinks about their dumpy philosophies.

While looking at pictures of neurons, Sam Harris made a startling discovery: free will is an illusion. Harris discovered the lie that lies in free will because the universe had mandated that Sam Harris exist due to the immutable preconditions inherent in the beginning of reality itself. If there were no Sam Harris, there would be no reality.

For his doctorate degree, Sam Harris hoped to learn how science can not only inform morals, but replace them entirely. Sam Harris was smarter than the average philosopher: he used science and experiments instead of thinking about thinking. Harris stuck magnets on different religious people's heads and looked at how retarded their brainwaves looked. Sam Harris discovered that Muslims have by far the most retarded looking brainwaves, as they zigged instead of zagging properly.

When Sam Harris isn't writing correct books and lecturing to pupils very goodly, he talks about important stuff like the illusion of free will, the dangers of artificial intelligence, why all Muslims should be irradiated, and other things that smart people on Reddit like to hear.[2]

The Beliefs of Sam Harris

As a neuroscientist, Sam Harris' conclusions about philosophy are extra correct, since his brain agrees with him too.

“If you only observe life phenomenologically, you will ignore the nose that stares at you right in the face.”

Sam Harris has promised to hold the most objectively correct opinions and beliefs, that can be undeniably judged correct through the scientific method. One correct belief that Sam Harris holds is that some people who disagree with Sam Harris can be so stupid and irrational, that (in some cases) it may become a moral imperative to kill them with nuclear weapons. He has so far (judging from the evidence we have gathered currently) unequivocally succeeded in this endeavor. Go Harris.

Politics and the West

The concerns of Sam Harris rest with the future of all humanity, and the bickering of the proles and their puppet masters matters little to the mind of Sam Harris, which is filled with good thoughts and important thoughts. Sam Harris only wishes that the leaders of his country would divert a small portion of the current U.S nuclear stockpile to preemptively strike Radical Islam, before it's too late. The White House has yet to return Sam Harris' calls, but he hopes progress will be made on this front.

Sam Harris—unlike those gelded so-called intellectuals of the Western World who prostrate themselves on the altar of political correctness and being wrong—believes that the West is the shining city on a hill, the moral leaders of the world, the master races if you will. Unlike the Middle East, which has always been plagued by fundamentalist Islamists which in no possibly way shape and form emerged from any socioeconomic or geopolitical factors outside the immutable truth that Islamic brown people have the dumb-dumb genomes, the West is morally spotless, having never acted in any way to deny anyone's fundamental human rights.

Sam Harris believes that the whiny histrionics of liberal "ethics" can be replaced by the Scientific Method, a method in science used to find correct things. For example, no one can ever truly solve the Trolley Problem without some rails, a few rope-tied citizens, a train and a fat dude. Sam Harris believes that science can, with no uncertainty, tell people the 100% bestest and corectest way to live their lives so as to reduce the evil and increase the total net good in the world.[3]

Sam Harris believes that the division between human values and science is an illusion, which logically means that anyone who is insufficiently scientific must have some moral deficiency of character, and may need some irradiating to cleanse their spirits of bad jujus.

Some critics of Harris' work may bring up the is–ought problem, but Sam Harris will counter by saying, "if you say the phrase 'is-ought' a couple times it starts to sound really weird, and that's got to disprove something."

Essentially, Harris has invented a completely new mode of thought, in which "empirical observation is used to determine the actions which best increase human well-being and reduce human suffering."[4] This has kickstarted a revolution in philosophy and science, since before, laws and societies were based on gut feelings and dice rolls.

No, this isn't just utilitarianism with a new coat of paint, Sam Harris hasn't even read Bentham, or Russel, and considers them all phonies which he would sue if they hadn't conveniently died before he was born. 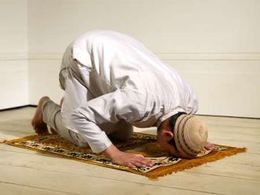 No! Sam Harris does NOT approve.

Sam Harris would like to apologize if Sam Harris hasn't sufficiently mentioned how much Sam Harris does NOT believe in God. Sam Harris is an atheist, and considers the belief in God or Gods to be the worst thing to happen to humanity since Reza Aslan. The world would be a much better place if people stopped talking to their imaginary friends and started blowing themselves up for more worthy causes, like more funding for a promotional tour of Sam Harris' new book, Islam and the Future of Tolerance.

Sam Harris has always been a vocal proponent of what his unscrupulous critics call militant atheism. This is ludicrous, as Sam Harris believes that the non-belief in God or Gods to be such an obvious belief that to label anyone as an atheist would be akin to labeling someone an oxygenist for believing in the need to breathe air.[5] Sam Harris therefore believes that this belief of non-belief should be rigorously imposed on all non-believers of non-belief. The term, militant common sense would more accurately describe Sam Harris' belief in non-belief of things non-believers don't believe in.

Sam Harris has unbelieved so much that he has been called one of the "Four Horsemen of New Atheism",[6] along with Richard Dawkins, Christopher Hitchens, and some other guy. With Hitchens dead, Sam Harris has humbly filled the role of two horsemen, and if he were to actually ride a horse as his title suggests, he would ride two horses instead, with one leg on each horse.

On the Nuking of Muslims

Everyday, the savage mob of hatemongers who call themselves the "critics of Sam Harris" do their best to drag Sam Harris through the mud. They take his words out of context, spinning them into whatever meaning suits their nefarious needs. The Harris Haters have led you astray, young foundling, they feed you with lies of the Harris and his ways. They relish in your doubt and feed on the ignorance of the world. If you listened to tools like Aslan,[7] Hedges or Greenwald, you'd think that Sam Harris was some genocidal maniac bent on nuclear Armageddon, and not simply a philosophical man, a man fighting the forces of oppressive dogma with his humble and very smart mouth. Read his actual words, and you'll see through the hyperbole of the lamestream media.

Clearly, this excerpt was an extended metaphor to help readers examine the futility of moral choices when faced with the irrationality of religion in governance. This gross misrepresentation of Sam Harris' views shows how low the media elites have stooped to deceive the public.