“I don't like the Church of Skepticism. I prefer a faith where I don't hear about God so much. Like Methodism.”

Holy Mary, Mother of Darwin, holding young Charles before selling him to be the Cabin Boy of the Beagle.

A religion that first started in the mid-19th century as an Anglo-American Skeptic's revival, degenerating into a variety of splinter sects, culminating in The Church of Secular Humanists in the nineteen sixties. It is a very dogmatic faith, characterized by the Anglo-American Skeptics rigid adherence to certain beliefs that may not be questioned in any way. The latest and greatest of these in dogma and intolerance is the most radical splinter group, the First Fundamentalist Church of Skepticism, Reformed.

Dogmas that may not be questioned[edit] 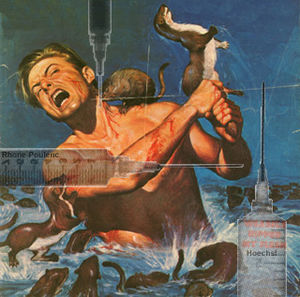 Skeptics attempting to engage a "Xian" in dialogue.

They typically worship on line, in groups where they all sit around posting about how smart they are and how dumb the unbelievers (Xians) are. Coffee Shops, while cliche, are still frequented, especially Barnes and Noble ones. They especially like being where there may be one - and only one - Christian...er, "Xian". This is so they can ratpack the "Xian" in an attempt to show how tolerant and brilliant they are.

This religion, like Jehovah's Witnesses, practices disfellowshipping, which is an ostracism of anyone who speaks against the dogmas of the faith. See the documentary "Expelled: No Intelligence Allowed" in which professors who even casually mention Intelligent Design are blacklisted.

They forbid their members from marrying outside their faith...more accurately, they can marry anyone, Wiccan, Pagan, Hindu, etc, just not a "Xian".

They blame "Xians" for every crime and horror throughout history. It is believed that they do this to cover up the glaring fact that their atheistic sister faiths - Communism, Socialism and National Socialism - have killed more people then all other religions combined.

They worship a trinity. Charles Darwin, Bertrand Russell and Richard Dawkins. It is blasphemous to point out that Darwin was a believer in God.

They are anti-science and logic. They believe what they believe in by faith, and no scientific or logical evidence to the contrary is accepted. Arguments of "irreducible complexity" in biology, or metaphysical concerns in cosmology go straight over their heads. Mentioning these things will only get you preached at by them, with pre-digested quotes from their trinity.

Their current Pope is Michael Shermer, a true believer who was once a fundamentalist Christian, but found being one to be too intellectually challenging so chose Skepticism instead.

With so many branches and splinters of the original movement, and the great schisms of the nineteen sixties, a council was held in Pittsburg to determine what made a skeptic a Skeptic. It was agreed that anyone who could - with all of his heart, and what little he had of his mind - say the following, was a True Believing Skeptic:

Not taking a stand makes us wise. Parroting the establishment's current beliefs on science makes us geniuses. Saying, "You can't prove that!" makes us right. In the name of the Darwin, the Russell and the Holy Dawkins, and by the Thumb of the Panda, Amen!

You need not look for them. Like Jehovah's Witnesses and Latter Day Saints, their's is a proselytizing faith. While typically too bashful to go door to door, they abound on the net and on campuses throughout America. Some signs are: