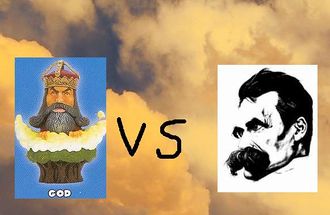 “I'm rubber, you're glue, whatever you say bounces off me and sticks to you.”

“Well then you're an awesome and cool philosopher who gets all the ladies. Nyah.”

~ God on the validity of reverse compliments

“Hey, don't call it if you can't stand the fact that I found a loophole.”

“It's not a loophole, it's retarded.”

“It is NOT retarded!”

“Don't question my judgment; I broke the hip of Israel, remember? You can't touch this.”

~ God on His unlimited power

“Come on, I can whip your arse any day!”

~ Nietzsche on wiping the floor with God

“Oh, then, well, too bad I have a bulletproof vest!”

“Nuh-uh, my vests made of tiberium and nothing goes through tiberium.”

~ God on physical properties of tiberium

“Well then I'd shoot you with a laser that melts the tiberium and then kills you.”

“No way, this is special unmeltable tiberium, you can't melt it.”

~ God on melting point of tiberium

“Yes I can, my laser has infrared, and like, ultraviolet light combined that melts even unmeltable tiberium.”

~ Nietzsche on invisible spectra of light

“Well then I can use my ninja skillz to evade the laser.”

“You don't have ninja skillz!”

~ God on His actual nonlack of ninja skillz

God jumps around the room, displaying His ninja skillz

~ Nietzsche on God making a total fool of Himself

Note: The above quote is sometimes misattributed to Nietzsche's desire for people to stop making fun of his moustache.

“Oh you're just jealous of my skillz.”

~ God on why envy is one of the seven deadly sins

“How can I be jealous of something you don't have? Huh?”

“Oh, you know you are, just like you were of my Stretch Armstrong, and you were all like 'I don't even like it! It's stupid!' then I left to get some cookies then I came back and you'd broken it, and you tried to hide it, but I saw it! You cut him to ribbons! Don't pretend you did't!”

“It doesn't even matter, cause my laser homes in on its target so even if you DID have ninja skillz it would find you, AND I DIDN'T EVEN FUCK WITH YOUR GODDAMN STRETCH ARMSTRONG!”

“Hey, my lasers will still find you!”

Note: This quote is sometimes misattributed to God's explanation of why heaven is warm

“Well in that case it just destroys the entire universe except for me, so no matter where you were it'd kill you.”

~ Nietzsche on being the victor

“Then I'd just create the universe all over again and make it so that instead of language, people just said 'Nietzsche's a fag' over and over.”

~ God on realizing the AIDS didn't get them all

~ Nietzsche on affirmation of the fact that it did not

Note: This quote is sometimes misattributed to Nietzsche's feelings on wanting fries with that.

“Yeah... and I hear he thinks you're cute! Hahahahaha!”

~ Nietzsche on his cousin's desires

“My gay cousin thinks you're cu-uuuuuute!”

“God and my cousin, sitting in a tree!”

~ God on fucking quitting that now

Note: The above quote is sometimes misattributed to God's feelings about fornication.

~ God on seriously, fucking knocking that off

~ Nietzsche on physiological impossibilities ignored for the sake of simplicity

~ God on not caring

“Look, I don't care, you're mean. Dude, don't ever invite me over to play Mouse Trap ever again.”

~ Nietzsche on God's resemblance to a vagina

“No, dude, I just have this totally cool collection of board games, so--”

~ God on His superiority

“Ha! I torched your collection of board games, so don't come crying to me when you want to play a game again!”

“Yep. Oh, and by the way, you better watch out for that tiberium. It's totally going to explo--”

~ Nietzsche on ducking behind a lead barrier

~ Nietzsche on his cousin Immanuel