For those without comedic tastes, the so-called experts at Wikipedia have an article about Eastern Orthodox Church. There is also OrthodoxWiki

Did you know... That Eastern Orthodox are a bunch of Freemasons in disguise? Another sign they are going into the eternal oven!

The Eastern "Orthodox" Church are best described as Roman Catholics without a pope, or, more correctly, Roman Catholicism is Eastern "Orthodoxy" plus papal absolutism and other late medieval heresies (e.g., the filioque, Immaculate Conception, etc.). The name "Orthodox" was made up, and it is to be put in quotes in order to demonstrate that this is a "false" religion that does not, alas, adhere to Tradition as such. The religion is known to be one of the rare few that actually lie about their own beliefs. The most well-known religious misinformation they profess is their claim to monotheism. The reality is that they worship a broad spectrum of objects that range from icons -- or, in Greek, eikon -- (cf. idols) to saints to onions. The date when Eastern Orthodoxy replaced Christianity as the state religion of the Byzantine Empire is disputed, but many believe it was in 843 when icon "worship" was legalized and deemed true to Orthodox Tradition by the Seventh Ecumenical Council.

The picture to the right is a famous Orthodox symbol that only a selected few can interpret -- namely those who are already experience a state of Divine ekstasis. To the Orthodox however, it has only been deemed famous by me. Very few actually know what I intended when I was making this, but luckily, Uncyclopedia knows! One day I was playing a new game I got on my PC called regedit. When I restarted restarted PC, I saw this, and immediately knew it was a sign from the supra-essential Godhead (Glory be to thee, O God). To this day, this mysterious sign continues to show up on people's PCs, but few actually know what it is. The sign means that your PC will undergo a great and cool change. No really, it actually does, isn't that scary?

The Orthodox are also known for raising dogs in Upstate New York, kittehs, making cheesecake, and running around in funny looking cassocks.

Some call them "icon worshipers," but why would anyone worship something on your desktop? A "real" Orthodox, however, will claim that these objects are "venerated" and not "worshipped," as worship is directed to God alone; however, we iconoclasts know this certainly is not the case. While the Orthodox are known for highly-ritualized religious artwork, they also worship onions. As a result, they also worship desks, computers, cats (cf. Timothy the Cat -- one of their utterly bizarre saints), dogs, and YOU! That's right, you are a false deity that is currently being worshiped! That means we know where you are going when you die*!

*Not unless you accept Cthulu as your personal eater. He will come and eat us all, but for one low price of $99.99 you can be eaten first! (plus shipping and handling)

If you go into an "Orthodox" Church you will see a large wall (in Russian Churches, it usually touches the ceiling) covered in icons of saints, Jesus Christ, his mommy, etc. This is called the idolostasis (or, as the "Orthodox" say, iconostasis), which means "magical idol wall" in Russian, Greek, Arabic, Aramaic, Greeklish, Latvian, or one of those other crazy east European languages. Nobody knows what goes on behind it; many believe that secret experiments controlled by the government occur, including but not limited to alien autopsies. There is a chance Jesus could be hiding there in the Tabernacle, but the Orthodox priests and babushkas will taken you down if you try to sneak past it, so no one knows for certain. For the Ethiopian "Orthodox," the idolostasis hides the Ark of the Covenant (i.e., the crazy box-thing that killed gentiles and shit). The idolostasis is "worshipped" (Babushkah: "NYET, VENERATED!") and is one of the central elements in the Orthodox liturgy.

So What do the Orthodox Worship Most?[edit] 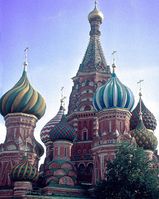 Famous temple to the Onion goddess. Notice the statues of onions on top of each tower.

Most "Orthodox" Christians will lie and tell you they are monotheists, and then quickly change the subject to a discussion of either parish politics, whether Fr. So-and-so can sing proper Byzantine chant, or who will conduct the next coffee hour. What they do not want you to know is that they really worship the goddess Onion. The "Orthodox" believe that the goddess Onion is the Supreme Being (i.e., the Hyperessential, Consubstantial, and Supraexistant Being who was, is, and ever shall be unto ages of ages), thus meaning that all other onions are simply an "image" of their Creator. Therefore, they worship onions (i.e., the vegetable) along with the respective goddess. Despite the onion's status in the Church, most of the ethnic groups associated with "Orthodoxy" commonly use onions in the preparation of various delicious dishes; while this could be viewed as sacreligious, it should also be remembered that the Orthodox also partake of the literal flesh and blood of Christ each liturgy like the Papists (AKA Roman Catholics, or, in the words of the Orthodox: Schismatic Violent Filioquists Who We Periodically Talk To).

The Orthodox claim that the liturgy is their main method of worship, but as declared in the Council of Holy Malakas in 1096, the liturgy is simply a means to distract the heretics from the fact that we -- erm, I mean, "they" -- actually worship the Holy Goddess Onion. Amen. What is the story of the Onion goddess? Since the Orthodox refuse to tell you about the Onion goddess, we just decided to make up a story. It's a shit story, but it's what you get, so be happy you ungrateful prick. The Onion goddess was actually the Patriarch of Constantinople. One day He (the Onion goddess was originally a man) started a religion known as Neo-Onionism (which currently has it's own news network), and mixed it with Christianity. At first the Papists viewed it as neo-Gnosticism, but they quickly tried to usurp the official Church of Constantinople to their vile papist ways. The Orthodox, of course, resisted. The result was Eastern Orthodoxy. So how did the Patriarch become a Goddess? Well, in the 666th (or 616th, depending on whether you are a Latin or Greek) Ecumenical Council -- which occurred in Nicaeoephasiopopodopolisgrad -- they decided that they would make the Patriarch the Goddess of all onions: "Some Ecumenical Council has ruled that the Patriarch of Constantinople who revealed to us the truth of Neo-Onionism, was in fact the Onion goddess herself in disguise. We have all come to this conclusion due to the fact onions are awesome." -Canon No. 0xFF343.

In current practice the Russian Orthodox lead the other Orthodox in worship of onions. The Greeks worship baklava.

One day the Byzantine Emperors, Leo III and his son Constantine V, decided they wanted to follow after the example of the ancient Israelite kings Hezekiah and Josiah and be total jerks ruining everything, man! So he did a bunch of stuff, but it eventually was undone by the Blessed & Most Holy Empress Irene, who is famous for corrupting, overthrowing, blinding, and killing her eldest son, in addition to digging up and desecrating the corpse of her own father-in-law and secretly transferring the office of emperor to the barbarian chieftain, Charlemagne.

In the year 1054 AD, the Pope of Rome (Leo IX, may he forever be a "kakos malakas") got really peeved at the Pope of Constantinople (i.e., Michael Cerularius -- may his memory be eternal). Leo IX, that rat-fink bastard, decided to send one of his cardinals -- who conveniently spoke no Greek -- to make the Greek "Pope" feel his wrath ex cathedra. When Leo's cardinal babbled at the Greek Pope in his Martian Dialect (Latin -- the language of heretics), the Greek Pope fled back to his baklava and ouzo. This, of course, infuriated the cardinal. So one Sunday, in the Blue Mosque of Istanbul, during a praise and worship service, the heretical cardinal burst in and marched right up to the altar, armed with a lightsaber. Just when he was about to strike down the Greek Pope, the Greek Pope drew out his lightsaber, and they had an epic battle behind the idolostasis to the dismay of the congregation, who were left standing for yet another four hours. Just when it looked like the cardinal was going to lose, he drew out his most powerful weapon: A paper declaring Michael Cerularius' excommunication from that idiotic Latin Church. Angry and confused, Cerularius dropped his lightsaber, crawled into a corner, and cried in front of his favorite icon of St. Basil. The cardinal ran off back to Rome before anyone could get him (in his words: "Those dirty Greeks were going to kill me with lamb"). After church, all the people in Istanbul were rioting and very annoyed at the pope. This time the Greek Pope could plan to execute his ultimate killer super death ninja plan: to excommunicate the pope right back! Like OMG! He therefore sent the pope an email that said: "You're xcommunic8ed! LOL!!!!11!1!! :)!", and when the pope read this, he began to plan his revenge: the Crusades. This is yet another instance of what Fr. Vasily considers "outrage."

The 4th Crusade. On the left are the crusaders, and the large mass on the right is the Constantinople Space Station.

No one cares about the first three crusades. The fourth crusade is when the pope was already mad at the Greek Pope because of the the Great Schism (another word for beard envy). He was also jealous because the Byzantine Empire wasn't going through Dark Ages, but the West was. Thus the pope built a huge space army, and sent them right to Istanbul's space station. When all the Latin Crusaders reached their target, they invaded it quickly, which made the Byzantine emperor mad and stuff. The Greek Pope sent out a mighty army of Byzantine ninjas, who had the ability to fly, breath fire, and shoot hot onions at their enemies all at once. Overwhelmed by the Byzantine Orthodox ninjas, the Latins ran for their lives back to Latin land. Now that the emperor and the patriarch were happy, but they got conquered by Turks! Hahahahahahaha! Now that the Byzantine Empire croaked and was now the Ottoman Empire, nobody cared about it anymore, and all the attention went to Russia.

Allegedly the Theotokos (i.e., the Virgin Mary) showed up at some point and whooped some Latin ass. Fr. Vasily sat on the sidelines saying "is outrage!"

Since Russia was too awesome to be conquered by Latins and Turks (and Nazis, and French, and Polish), they enjoyed being Orthodox for a really long time. The czars helped them build many temples to the Onion goddess, but then came all the Bolsheviks who hated Onions. The Bolsheviks, also known as the Anti-Onion Union, took over Russia and owned it for a whole bunch of years. They hated the Onion goddess. Then one day Czar Gorby came to the throne, and used the powers embedded in his mighty birthmark to summon back the Onion goddess. Thus he proclaimed saying that thinking Onion Worship is bad is a bad thing to believe and therefore that means you are bad.

Most Orthodox music is modern and contemporary. Here are some famous Orthodox rock styles:

Differences between the Roman Catholic and Eastern Orthodox Churches[edit] 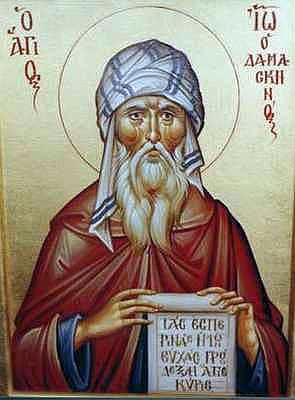 an Idol of the idolater John of Damascus. From the distinctive style, this image can be dated to between c 750 and yesterday with 95% accuracy.

Some people believe that the Roman Catholic and Eastern Orthodox Churches are essentially the same in doctrine. This is complete bullshit. The vast difference include: