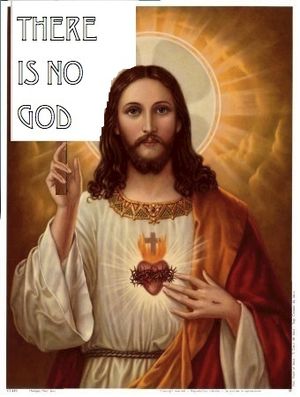 What he said.
“You're fucking kidding me right?”

~ Joseph on the announcement of Mary's second virgin pregnancy

“Apparently he died for all of our sins. How is that tangibly going to improve my life?”

~ Atheist Jesus on his brother Jesus

Atheist Jesus was God's second son through virgin birth. He was born to be a support to his similarly named brother Jesus. Atheist Jesus' constant skepticism over pretty much everything that happened around him meant he was ostracised from the Christian family who saw him as little more than a bearded nuisance. Because of this he has been largely written out of the Bible.

He got all the best weed.

Joseph's inability to sustain an erection long enough to penetrate his wife had caused tension in the household ever since they had been married. On the day of the announcement of the pregnancy, they had still never had relations of a sexual nature.

"Mary just walked in matter-of-factly and announced that she was pregnant again. When I asked who the father was she again said. 'God,'" Joseph wrote in his autobiography Jesus and Me. "I can't pretend I wasn't a little suspicious. I mean, it's a convincing story, but I still had little doubts nagging at the back of my mind. My mate Rob said that his burd Shelly had got pregnant off that God fellow too, so I sort of went along with it."

Joseph was much better prepared when the birth of the second Jesus occurred. He had planned the route to the nearest hospital on his 'little donkey' several times. They took the dusty road and arrived in plenty of time for Jesus 2 to be born in the relative comfort of Nazareth General.

"Why do we have to call him Jesus?" Joseph reportedly remarked after the "Virgin" Mary insisted on the second-born also being named Jesus. 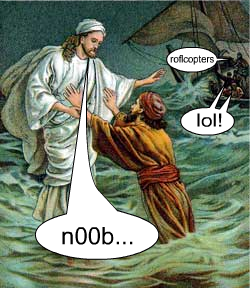 When Jesus speaks, he pwns.

After his brother Jesus had died on the cross, Jesus 2 insisted on becoming known as Jesus. He also announced that he wished to meet his real father. Mary again explained that his father was God, to which Jesus answered that in that case he wished to have a face to face with the Almighty. "Joseph has been a great father to me, but I just feel that I want to get to know my real dad," he commented. "God's been very much an absent father, and I don't think he's been entirely diligent over the maintenance payments. I just want to give him the chance to explain."

After hearing the rumours that his brother Jesus had risen from the dead he commented, "Well he hasn't been to see me!"

Jesus never did get another chance to see his brother. He was told that his older brother had gone to the top of a hill and disappeared. "Look you've either risen from the dead or you haven't. Ascending into heaven on top of a hill before you've even sent so much as a postcard just smacks of bad manners." Jesus was quoted as saying.

At the age of 24, Jesus started to notice his hair thinning. In his autobiography 'Life as the Second Jesus' he wrote, "After having a shower I would find lots of stray hairs on the floor. It was soon obvious that my hairline was in fact receding. I asked my mum, and she said there was no history of baldness in her side of the family so I assumed that it was from the God side. You have to really question whether they'll ever find a cure for baldness if even the Creator of the universe is sporting a comb-over."

Rumours about his mother’s promiscuity were rife in Nazareth. And Jesus confronted his mother. Mary admitted to her second son that she had sex with a local corporate banker about nine months before his birth. She strongly denied that this man was his father. “We only ever did it once,” she commented. “You can’t get pregnant of someone if you only do it once. Any man will tell you that. And he didn’t even have a proper penis.”

Atheist Jesus became slightly atheist after this admission by his mother. 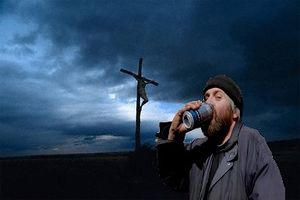 The last sightings of Atheist Jesus were made when he was about forty. He was living rough and drinking heavily. Old friends reported a sad and incoherent figure wandering the darker, seedier streets. “No one’s going to crucify me,” he was overheard saying.

His friend Jack recounts the last fateful time he ran into Atheist Jesus. “I saw him and he said he’d had enough of everything. He said he wanted to go to Mount Olive to see his brother. Nobody had seen his brother in years but he insisted he should go. He could hardly walk and I had to practically carry him. As we went on he seemed to regain some strength and managed to support himself more and more. By the time we got there I could no longer feel him holding on for support. I never saw him again.