The Jee Man Himself has shown, in his infinite wisdom, that he is the ultimate purveyor of all things nifty, spiffy, and generally interesting. He has personally reviewed this article and given His blessing. The submitter may be forgiven three venial sins or one mortal sin.

“ I love the Jesus Christ Sponge, I, like, don't need to think when I clean anymore. It's just, like that awesome.” 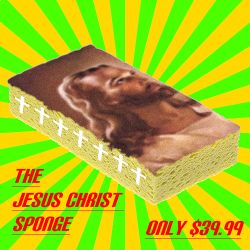 Because of their incurable biases, the so-called experts at Wikipedia will probably never have an article about Jesus Christ Sponge. We are sorry they insist on being this lame.

The Jesus Christ Sponge is the result of many years of top-secret child molesting research by the Catholic Church. It has received international acclaim for not only being able to clean dishes, but also having a picture of Jesus on it, despite it's ridiculously high price.

In 2006, there was tremendous controversy over worker conditions in the Jesus-Tech factories. Some workers were reporting being forced to work naked, while being watched by older priests. While others reported being touched by their managers. Another source of controversy was that all workers were little boys.

In 2007 Paris Hilton made a public endorsement of the Jesus Christ Sponge, claiming that it made cleaning easy, and removing the little thought required to clean oneself. She then proceeded to explain how to use the sponge saying:

“First you take the Jesus Christ Sponge, then you, like, give it to your manservant and he moves his hands on you and your clean! it's like so EASY!”

The major part of her endorsement was along with having a Bible in every room, every room would also have a Jesus Christ Sponge. This action fell on some controversy seeing as she rejected requests to have the Koran in every room, as well as many other religious texts.

The Jesus Christ Sponge was quickly endorsed by Jesus as the 'Official Sponge of the Church'. Though Jesus himself never spoke of the endorsement, and has in fact not been seen for 2000 years, The Pope released this statement:

“ Jesus has made it clear that the only way to get into Heaven is to purchase a Jesus Christ Sponge from any Jesus-Tech retailer.”

Many people doubted the legitimacy of this endorsement, these questions were quickly put down by the Pope's statement:

“Trust me! This time I promise it isn't the alcohol talking!”

Theory of the Jesus Christ Sponge[edit]

The Jesus Christ Sponge can be proven easily:

The Jesus Christ Sponge uses the formula Jesus^4=MC^2 and transforms a small part of the sponge into a mini-Jesus. This mini-Jesus can then be used to clean your dishes. 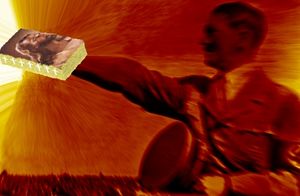 Powers of the Jesus Christ Sponge[edit]

The Jesus Christ Sponge has many amazing powers such as: 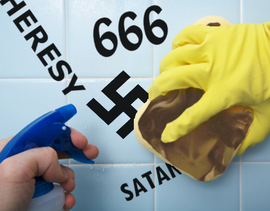 Just spray, wipe, and the evil is GONE!!!