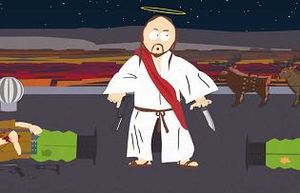 Jesus 1.5a, seen here in a holographic training simulation run on the Vatican's finest Tandy Color Computers.
“1.5a?! Hath ye been smoking the Crack perchance?!”

“If you call me again with that shittily programmed gibberish I will have you shot!”

“I have been instructed by god to exterminate you. For you make me look bad”

Jesus 1.5a (codenamed Rais-'er,Walk-'er(and), Optimus Christ) is Macrohard's new Beta version of 'the Christ'. A vast improvement over Jesus1.0d who had only the basic ten commandments and cerebral functions written into his body.

Jesus 1.5a is being created under the direction of Pat Robertson B.C. for use in his highly anticipated, upcoming cult called "CHRISTIANITY!". As every watcher of Roman-PseudoScientifictheemporerroxwhogivesafuck Television Networks knows. This new cult will be used as a social engineering tool to gain control over future generations of people when applied in conjunction with the Bible. A prototype 'half-finished' book of 'laws and the truth' that will make it easy to control the populace and git rich'.

Well. Time passes and the Roman Consulate is waiting. While Macrohard claims they're working full-time on programming Jesus1.5a for use as a semi-sentient/independent preacher in the streets of Jerusalem. Global Political spectators in Aztec Crackhouses over in the 'New World' (Whatever that means) speculate they are in fact putting in only 50% of the agreed manyears a week in order to help Russia on THEIR newest social engineering product (which will supposedly totally rock and kick the current 'Mongoloid King' systems ass) known as Communism 3.0c-e-d.

However, since the Roman Consulate has plenty of whores donated by the kind leaders of MacroHard any legal action is unexpected to come soon. If at all...

For those of us who aren't still 89% of the Neanderthal/Homo-Erectus bloodline. Macrohard president Steve Ballmer, under penalty of death for improper business conduct has released an Opensource EULA version of their most recent code just yesterday to some guy named Aristotle over in Inferior Greece.

While critics claim that the methodical extermination of our bloodline ancestors is Specist others point out that the prospects for social increase with more of a less individualized society/with an Aristocracy for rulers.

While only ONE copy is intended. Jesus is still in the Beta stages of technical development and so in case this one totally fucks up. Then replacements will have to be shipped until Macrohard can make any necessary updates to the current model.

“This is in keeping with our general model of bloat over substance. If you do not like it then I will F'ing kill you!!!”

~ Steve Ballmer on The design of Jesus 1.5a

“Do bowls of cherries talk Jesus?”

There was a major religious controversy when Jesus 1.0d (the previous model) was abducted by the Pope to fight vampires and save the Lesbians of Montreal. During this stint Jesus 1.50, the first revision of 1.5, was deployed on emergency mode and used the assumed name "Martin Van Jesus".

These antics on the part of the previous model have been considered a future social acceptance setback as fighting of vampires leads is considered a n immoral activity. However, MacroHard DENIED any connection and claimed Jesus1.50 (though we all know this is a load of bullshit) to be a pirated, warez version of 1.0d. However MacroHard still has to explain what 1.0d was killing vampires for in the first place.

This Blessed Virgin Mary was seen as a definite improvement over the previous version.

Along with the Lord, himself, several attempts were made to update his Holy Mother, as well. Many versions boasted a sleeker design, eliminating much of the rustic quality many worshippers had come to expect. Eventually, most of the more radical concepts (above) were toned down, to create a Virgin Mary who was playfully sexy, but also believable as a virgin.

Macrohard has recently unveiled Jesus 1.5a RC 2 to religious leaders of several world religions who are largely convinced he will add nothing of value to World Religion. This is considered by many as the final Release Candidate before the Advent of Jesus_2.0.

Macrohard is cracking down on illegal warez copies of Jesus 1.5a. Which have been circulating on the Internet especially via Usenet and Peer-to-Peer Networks.

“You think you can steal your salvation?!? See you in Hell asshole!!!”

~ Bill Gates on The piracy of Jesii

Commentators have noted that Hell, Michigan was the site of Macrohard's last three Antitrust Trials as well.