Prince and the Revolution

From Uncyclopedia, the content-free encyclopedia
(Redirected from Prince (artist))
Jump to navigation Jump to search 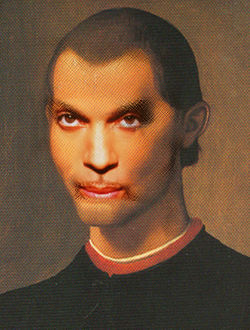 Niccolo, know for a period during the 1290's as "Squiggle" or the "Artiste Formerly Know'n As Machiavelli", was noted for his virtuoso performances on the lute.

“This is what it sounds like when Duke Valentino's cry”

~ Noel Coward on Prince and the Revolution

Prince and the Revolution is the name of musical written by the preeminent musical-political-theorist Niccolo "Slick Nick" Machiavelli, about an Italian Prince known only by the unimaginitive title 'Prince'. During the musical's 3 powerful 'Movements', Machiavelli lays both a unique, amoral political philosophy and infectous pop-songs. Prince and the Revolution is known worldwide for it's cynical account of power politics and its slamming funk-inspired grooves.

The album quickly shot up the charts to #1 on the week of its release, but it was soon violently overthrown by a compilation of songs from the self-proclaimed King of Popular Music, Michael Jackson.

The musical, subtitled Chaos and Disorder, deals with the complexities of being a Prince in the dangerous and turbulet world of 13th Century Italian city states, dealing with the corrupt Catholic Church, and being a sex God even though you have an effeminate falsetto and are barely 5 feet tall.

Machiavelli said the 3 'Movements' represent both the trimesters of pregnancy and the movement involved with making love, and that Prince and the Revolution was only partly about politics, and was 'mostly about making love'. Machiavelli's 'deep' like that.

You Say Powerplay, I say Foreplay

In this first movement of the musical, subtitled "Funk You Like I Did the King", the so-called 'Prince' fills us in with background information regarding his rise to power and control over his city state, Apollonia. Prince explains, over top of a powerful Curtis Mayfield-esque bassline, his position atop the Italian political sphere, his control by proxy of major city-states such as Milan, and his sexual proclivity and penchant for use of shower cleaning apperati for stimulating his concubines.

It Only Hurts the First Time You Get Overthrown

For those without comedic tastes, the so-called experts at Wikipedia have an article about Prince and the Revolution.

For the second movement, subtitled "My Royal Nuts", Prince sings about his political opponents, a group of musical miscreants known only as 'The Revolution'. It's made clear that the group means to overthow Prince at all costs, in order to take control of his throne and his harem of chicks that bear more than a slight resemblance to the Prince himself. Prince explains the impossibility of this situation, stating: "Nobody can do it/like I can/we should make love/in a garbage can". This is both a statement about Prince's powers as a ruler, and his virility and talent for sex in tiny, enclosed places (remember his small stature.)

This piece is known for it's startling accurate portrayal of the cyncism and hedonism associated with despotic rulers, and is also a showcase for the Prince's mind-bending Lute solos. The piece ends with an upbeat outro consisting of Prince making love to a serving wench on top of the piano, in time with a glockenspiel.

Machiavelli went on record saying this was his personal favorite song on the record, but he also said that 15 minutes of Prince's love making on the album was "a little too much". He said "It seemed like a good idea at the time, but hey, crack will do that to you."

There's More Where that Came From

In the third and final movement of the piece, subtitled "Divine Right of Rock", Prince does battle with the Revolution and the work reaches its climax when Prince and the leader of the Revolution engage in a guitar duel for control of the city-state. Prince manages to defeat the Revolution with relative ease by playing the guitar solo from Stairway to Heaven, backwards, while hanging upside down, naked, from a tapestry of The Last Supper in the Royal Dining Hall of the Vatican. The crowd goes wild for his virtuoso performance and sides with him in beheading the troublesome Revolution. Prince has won this day, but Machiavelli is quick to note that there are always aspiring Revolutionaries, and a Prince's job is never done until all the ladies in the place have had some of the 'Purple Reign', Prince's name for both his penis and his dynasty.

Prince's artwork, with a subliminal message 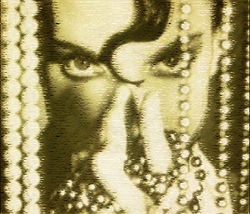 Prince and the Revolution was a controversial release in 1523 due to it's stark, amoral accounts of political life, Church in-fighting, and hot, heavy Prince-on-things-that-aren't-Prince sex.

When asked to respond to criticism that his music was "too real" and "too violent", Niccolo responded by simply saying "It's just a thing sometimes, you know?" Many were put off by this seeming non-answer but Niccolo released another statement saying "If you have to ask what it's about, it's obviously not for you in the first place."

There was a public outcry when a group of youths overthrew the reigning leader of Naples. When their efforts were thwarted and they were brought in for questioning, they told authorities that wanted to be dictators "just like their hero Prince" and that they got their ideas from the album Prince and the Revolution. There was a groundswell of condemnation for Machiavelli's album forcing him to go public and explained its meaning and intent.

"My album is mainly about the kids. With an increase in the rate of violent upheavals, every singe Italian child can hope to control a city-state, if only for a fleeting moment." -- Machiavelli, December 1299

Still, this attituder, tolerant of change and dissent, irked many in power. The Catholic Church was unsatisfied with this explanation and ordered that all copies of the album be given a warning sticker stating "Parental Advisory: This Album may cause Jewishness", its most harsh designation. Angered at this, Machiavelli overthrew the Catholic Church and made himself Pope, ending the controversy. Unfortunately, he was deposed in under 15 minutes by a cabal known only as 'The Time'.

Prince and the Revolution is a famous, widely listened-to album even today. No where else can you get such inventive guitar playing, playful pop sensibility, sexual ambiguity, and political philosophy on one record. Because of this, Prince and the Revolution remains one of the most popular albums for those looking to study politics or short men of incredible sexual aptitude.

Prince and the Revolution remained the Gold Standard for political tract albums until the release of John Locke's famous release, The Second Treatise on Government: Parliament/Funkadelic.