From Uncyclopedia, the content-free encyclopedia
(Redirected from Joker)
Jump to navigation Jump to search 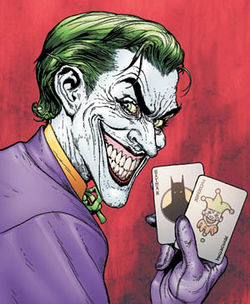 Are you into magic tricks?

The Joker, also known as the Man Who Laughs or simply Lil' J, is a psychotic clown who terrorizes Gotham City. The Joker, despite his strange ego, serves as the archenemy of the vigilante Batman.

The Joker was created by Stan Lee following a crazy summer night in Las Vegas back in '53. Originally, the Joker was meant to hysterically portray John Wayne Gacy but the idea was rich and therefore became stamped into comic history. The Joker was also originally suppose to be called the Mime but it was lethally tedious to shape the character's personality into a twisted ego without using words. Lee was baffled and decided to sell the rights to Jack Kirby, Bill Finger, and Bob Kane for at least one penny. RAPE RAEP RAP.

Nobody knows who the Joker really is, but nobody really cares. The Joker is the second most dangerous enemy that Batman has ever faced, the first is Superman who sued Batman for stealing his outfit design (the judge let Batman win the case because he made it look much cooler than Superman ever could). The Joker is named after the cards he carries around and even calls them his calling cards, even though they have absolutely no helpful information printed on them. These cards are handed out to all the criminals whom he's willing to make a deal with (who quickly put under a soda can). He gets these cards by traveling across the country and picking out the two joker cards from every deck he finds (they're actually quite easy to come by in Montana). Joker is actually clueless about who he really is or why he looks this way. So to help cope with his problem, he created a real name and all sorts of stupid origin stories. However he changes this name and origin each day because he can never remember what the story he told the previous day was. 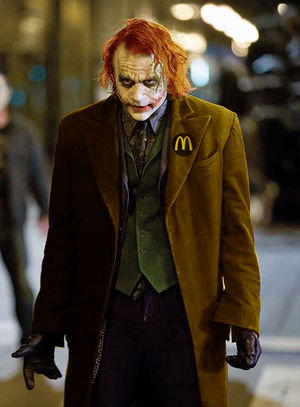 Though it is not his true identity, the Joker was often speculated to have had ties with Ronald McDonald, owner of the McDonalds Empire which is just several steps away from conquering the world. When this shocking truth was revealed, it shocked the world so hard that everyone froze in their place for ten straight minutes. This soon became a problem as the overpopulation of China caused the planet to lose its balance and it started to tumble towards the sun (but everyone managed to get a hold on themselves before it was too late). The Joker admitted that it was true, he was Ronald McDonald and this was one of his random and crazy ideas to amuse himself (and poison the world). He stated that he left many clues for anyone who could solve this mystery (because that's what criminals do). The first two clues were found within the two catch phrases "We love to see you smile" and "Put a smile on." Further evidence was presented when amino acids were found within McDonald's patties. Also, it was soon discovered that the little toys that came in kids meals were specifically made to be a choking hazard to little children whose parents would not allow them to purchase the very big burgers.

After this truth was revealed, it also was revealed that the Joker had partners in this mad and sick plan. The Sloppy Joe spawned villain known as Clayface aided the Joker's sick plan with his powerful empire of Burger Kings. The Joker was also aided by fellow villain Mr. Freeze and his long chain of Dairy Queens. However the villain who shocked everyone was Poison Ivy and her vast chain of Wendy's. Poison Ivy drew much attention as Wendy's was the only place that actually served healthy salads, though Poison Ivy revealed that these salads were all made from the mutant plants she grew in her back yard. The special leaves that the salads were made up of contained a special chemical that caused many people to get addicted to the salad and thus keep coming back to Wendy's (giving Poison Ivy more and more money). Poison Ivy also revealed that the chili was actually a special soil made from the bodies of human beings. She also stated that one of chili bowls hadn't been completed before being served to a customer, thus leaving a human finger exposed. Your mum wasnt there

Joker currently resides in a deserted theme park with his girlfriend Harley Quinn. His hobbies include killing people with laughing gas, Joker venom, knifes, guns, and pickles that explode. He also likes to collect bottle caps, and enjoys Tim Burton films. (Besides Burton's Batman film, which he hates for killing him off, and making him old).

[ ]
Your UnComprehensive Guide to the D.C. Universe
Retrieved from "http://en.uncyclopedia.co/w/index.php?title=The_Joker&oldid=5932678"
Categories: