Sweet Smoking Jesus is a 3D picture, dating to 1959, in which Jesus Christ looks at you, then lights a cigarette, takes a nice long drag and then ponders your fate before exhaling. The image of Jesus Christ, is an anomaly according to its creator, the now defunct Maxfield Novelty and Regalia Company of Racine, a large-ish city in Wisconsin, which manufactured 3D image shift pictures from 1940 through 1970.

Upon its discovery - which many viewed as a sign of God's existence, the family that bought the picture at a Stuckey's outside Bogata, Florida, were overwhelmed with visitors and pilgrims who flocked to their modest home in southern Florida.

Throughout the 1960s and early 1970s, the image of Christ taking a long-stoke on what appeared to be a king-sized menthol Parliament cigarette drew both the ire of organized religion and the adulation of those who believed that image sent a message of salvation for smokers.

One morning in the late spring of 1959 a mysterious traveling salesman appeared at the Bogata Springs, Florida Stuckey's, (store No.368), to buy six gallons of Hi-Test and a carton of Old Gold cigarettes. After engaging the day manager in a conversation, the sales person - who called himself Gabriel - left for his Studebaker Lark, and returned with a sample of the 3D image of Christ. Store manager Delbert Twigg said in a 1961 televised interview with Arthur Godfry that "Its eyes followed you as you walked in front of it."

Ordering a fifty-count display dump of the picture, Twigg also said that "Weren't nothing special, but it sold for a $1.99. But you knowed it, that salesperson didn't stop anywhere else around here and he never called on us again."

On the seventh day of sales from the display, Arlene and Bud Bishop of Clearwater, Florida arrived at the Bogata Stuckey's to fetch a Pecan Log and a box of Good n' Plenty to take to their niece's birthday party. While Mr. Bishop took his son to the Gentleman's Room, Mrs. Bishop began to look over the gift items in the store, when a cardboard display caught her eye. In the same Arthur Godfry interview, Arlene Bishop said that she simply picked up the picture to buy it because she felt "there was something special about it. Something that made me feel alive with pleasure."

When the couple arrived at their destination, Mrs. Bishop went into the kitchen, removed the 3D picture from the Stuckey's bag and placed it on the counter. She noticed that her sister-in-law Connie Dwyer was preparing finger-food for the guests and instantly offer to help - remembering all too well that Connie couldn't slice a proper carrot-stick if her life depended on it. While preparing the food Mrs. Bishop mentioned that she had just "picked something up" that she felt would go well in the family's living room. 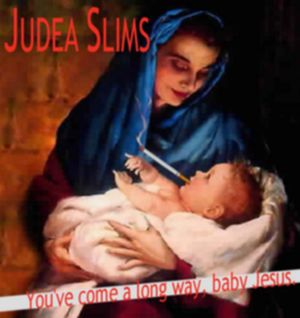 Matt2:11 And when they were come into the house, they saw the young child with Mary his mother, and fell down, and worshipped him: and when they had opened their treasures, they presented unto him gifts; matches, an ashtray and smokes.

At 7:30PM, the Dwyers' five-year old son, Lil' Shaw, found the boxed Pecan Roll near the picture and when no one was looking, began to pick at the log, licking the sweet sticky goodness off the nuts, which he disliked.

When confronted by his father Shaw Dwyer, the boy looked at the image, exclaimed "Sweet Smoking Jesus"' and was promptly walloped by his father for taking the the Lord's name in vain. The child protested mightily but the beatings continued unabated. "It just about ruined our Darlene's birthday party," said Mrs. Dwyer when interviewed after the event. Until, that is, Mr. Dwyer looked at the image and saw that in fact sweet Jesus was not only smoking, but smoking with purpose.

"It was at that moment when I saw Sweet Smoking Jesus put the cigarette to his Godly lips, take a deep puff and hold it in while he was ponderin' me," claimed Dwyer in a 1961 Look Magazine article. "A moment like this changes a man."

When word of the manifestation of our sweet smoking son of God spread amongst the people, the Dwyers' home was overrun with both the faithful and those who doubted the story. A newspaper article quoted Mrs. Dwyer as saying, "We had to get the sacred icon out of the house to save our family from the hordes of the faithful."

The Bishops were happy to get the sacred image back as they were both long time smokers. Eventually they built a concession catering to those who wished to see the image of the Sweet Smoking Jesus. At twilight each evening, visitors could pay the $5 ticket price to walk through the hastily built grotto of ashtrays set in mortar and enter into the Shrine of the Sweet Smoking Jesus. The Bishops would then begin their evening show by shining a light on the picture and slowly turning it from left to right and right to left. The Bishop's son operated a small business of his own by emptying ashtrays of the faithful for a .25 cent "offering". 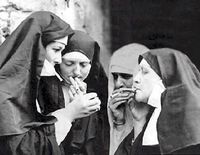 At the peak of the phenomenon the family greeted 100,000 visitors per year - all walking a mile to the gates of the display and then paying $10 a head to see the miracle. "And it was a miracle, for us," said Mrs. Bishop shortly before succumbing to lung cancer in 1981.

The Bishops attempted to manufacture their own image of Sweet Smoking Jesus, according to their son. However "the attempt was never able to capture the luminescence that is Christ while smoking in quiet contemplation."

After consulting with Billy Graham -- who declared the picture one of the most curious ways that Christ has made his presence known." -- the Bishops stopped trying to create trinkets with the iconic image on it, stating that they did so because it "only cheapened our Lord, Jesus Christ, Almighty." However the family continued to sell their in-house brand of cigarettes, Jesu Filtered and Jesu Menthols to the faithful.

In 1962, the Vatican studied the artifact and issued a statement ("Non presti attenzione a questa cosa") that essentially translated as "Pay no attention to this trinket." However reports from the Vatican point to a contrarian view: Pope John I became fixated with the image, starring it long into the night, until one day emerging from his personal apartment and announced that he would convene a conference of Cardinals and discuss modernizing the church. The resulting Vatican II conference resulted in all sorts of modernized views, including the introduction of altar boys to tobacco products by age 12.

As for Sweet Smoking Jesus, the Holy See refused to return it the Bishop Family, who eventually sued for its return. Finally, in 1968, the picture was returned to the family, who had begrudgingly agreed to sell 50% of the concession money earned by the image to the Vatican. After the return, the relationship between Rome and the Bishops, who were now living in Trampa Del Turística, Florida, soured when the Vatican also demanded a cut of the cigarette concession and firing of the cigarette girls who sold them. The Dwyers, in response, tucked it away for safe keeping in an undisclosed location.

Sweet Smoking Jesus has not been on regular public display since the Vatican affair, however the Bishop's son will occasionally consent to a showing, usually in cooperation with a county fair or political rally according to the family's attorney, Joe Camella.