For the uncouth among us who choose lies, the so-called experts at Wikipedia have an article about Penn and Teller. 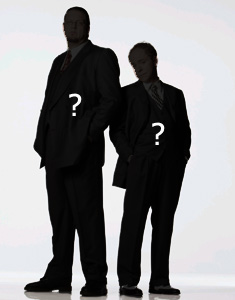 ~ Penn and Teller on everything

Penn and Teller is the name of a Vegas magic act written and performed by two anonymous magicians. They are not, in their spare time, the thrash metal band Pet Shop Boys as some suspect. They have been baffling audiences with their seemingly impossible magic tricks. Because nobody knows the names of the two men, they are simply referred to as the tall one and the short one respectively. They got killed in Get Killed and were quite visible in Invisible Threads. You figure it out.

They appear everywhere and are the often the subject of phobias and being fooled. None of which is believable, but they offer themselves up as sacrificial pawns in a chess game they control. That's the oddity of Penn and Teller.

If you are looking at three guys in full blue make-up, it ain't Penn and Teller.

The taller of the two has long hair and glasses. He is the frontman of the act, always conducting the show while the shorter one is subjected to unspeakable atrocities and mind-boggling pain. The tall one frequently yells things about atheism, libertarianism, and bullshit, though in his private life he is a devout fundamentalist Baptist Fascist and loves bulls.

The tall one possesses self-admitedly subpar juggling skills and frequently injures himself and audience members dropping glass bottles during performances. He has also caused mass panic and countless audience injuries by screaming "Fire!" in crowded theaters. Along with well known juggler Guy in a Monkey Suit, he was once the host of a daily hour-long talk radio ministry devoted to spreading the Word of God, fascism, animal rights, and decreasing monkey awareness. He is a Pisces, yet claims allergies to seafood.

He is the father of two children, Oxy Grime Fighter and Zoltron.

The tall one was the host of a Televison quiz show called Identity on NBC. The show consisted of contestants trying out their racial profiling skills on complete strangers. The premise of the show was for the contestant to match twelve strangers with twelve identities ranging from the easy like "Caveman" to the difficult "Has ambiguous genitalia". This is much like the job of an NSA agent except the NSA doesn't exist, and if it did, it still wouldn't. The prize for correctly matching a stranger to their identity was a hug from the tall one or a dealdy pit viper Fed-Ex'd to an ex girlfriend or boyfriend.

And then there's this asshole. Man, that's way too soft let me try that again. AND THEN THERE'S THIS ASSHOOOOLE! The shorter of the two is known for never speaking during any of the performances. Reasons for this silence were often speculated upon until the short one himself revealed in a telephone interview that he was rendered dumb and also mute after witnessing a live, all puppet performance of The Aristocats. He has no known first or last name, but merely goes by an alleged single middle name which may or may not be spurious.

Here lies the first Short One?

In the commentary track of the "Penn & Teller's Magical Mystery Tour" DVD, it's revealed that the short one was once caught attempting to sell a number of the tall ones magic tricks to David Copperfield in exchange for nude pictures of Claudia Schiffer, and as punishment was made to perform painful and disgusting tricks on-camera. The short one is often subjected to extreme pain while placed in mortal danger during the act. It has been suggested that years of performing in this way have damaged his brain so extensively that just no longer feels any pain.

It is also important to note that, by his own admission, he is not the first short one [1].. And more notable that the tall one purchased a burial plot just before the second short one began to perform. The tall one claims that it is just part of an elaborate card trick.

While it is not known exactly where the two met or formed the team, the first documented Penn and Teller performance took place at a small club in Seattle where they were discovered by a talent agent. At that time, rather than magic, they performed musical numbers a cappella, although the short one was rather regretful of this obviously poorly planned career move.

Following the discovery in that club, the two moved to magic after they realized that people were idiots and would give them money if they set up some cheap special effects. Their first Vegas show was a smash hit, earning them critical acclaim, and the sworn hatred of Lance Burton and David Blaine.

The Tall One says the magic words.

The short one is generally crushed, drowned, dismembered, rotated, perforated, or set on fire during the act. One of the more popular tricks is a variation of Harry Houdini's classic "Chinese Water Torture Cell." However, in the Penn and Teller version, the short one is locked inside a medium sized Craftsman tool box which is welded shut, then suspended upside down and slowly dipped into a cauldron of molten lava The trick is performed to the Don Ho song, "Tiny Bubbles" which showcases the Hawaiian crooner to an extent, but is obviously used as a way to force the audience to accept the sadistic cruelty of a possible drowning and finding it entertaining. Another popular trick is a disappearing act in which the tall one makes the short one disappear using only a pair of anti-gravity boots and a rolled up magazine. Somehow this trick was hatched from an idea after watching Alien. To this day nobody can figure out how the two pull off these tricks without getting themselves arrested.

The two men make frequent guest appearances on television shows, usually playing themselves, but sometimes playing with each other. They had a television show titled Bullshit! about the biology of barnyard animal digestive systems but it was short-lived due to its unfortunate Friday night timeslot - a timeslot which is infamous for its failed television shows. The Tall One screams about how psychics and mediums offer a wonderful contribution to society by helping people in distress while pointing out the flaws in science and empirical evidence as presented by Siegfried & Roy. A main theme of the show is how God is the solution to all problems, including barnyard animals. Many episodes are set on this premise proving creationism, the Bible, and images of the Virgin Mary on grilled cheese sandwiches are all indisputable fact!

Since 2001, the team has retired to the Rio All Suite Hotel and Casino in Las Vegas where they spend most of their free time busking for spare change. They have become a fixture on the Strip and they are listed as a "What not to miss" in the AAA guide book, right after the Mustang Ranch.