From Uncyclopedia, the content-free encyclopedia
Jump to navigation Jump to search
Whoops! Maybe you were looking for sexting?

A phone sex user at home in 1989. (Emoticons added at request of AOL).

The dark art of phone sex is arguably the most remote form of sexual intercourse but studies also show that this version of sexual intercourse has the highest chance of transmission. Phone sex often leads to its exponents being engaged, but reports of becoming pregnant have been rare. In 2012, however, there was a high profile case when Kim Kardashian confirmed on Twitter that she was carrying Kanye West's baby after an incident of wild phone sex, perhaps the first time a phone has been used both to inseminate a woman and announce the resulting pregnancy to the world. 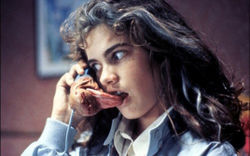 In 1984, AT & T began marketing phone handsets with built-in tongues which responded primitively to sounds made by the other speaker. Cf. Big Mouth Billy Bass

For those without comedic tastes, the so-called experts at Wikipedia have an article about Phone sex.

Phone sex is the act of having sex through a phone, most commonly through a cellular phone, although this does carry a higher risk of exposure to radiation. Note that it is 'through' a phone in the sense of via a phone, not actually through it. Phone sex does not include using the actual handset to stimulate one's penis or vagina.

At its most eloquent, phone sex involves the description of sexual acts from the speaker's perspective. There are differences in style, with some talkers preferring to use future tenses ("I'm going to turn the hoover on now and get the KY"), others conditionals, as though the act is something of a remote possibility ("I would smear that spaghetti all over your bosom"), and still others preferring to use the present simple, a custom which is also often found in cyber sex ("I run my hand lightly up your stomach, then let it fall away so I can use it to raise my kilt"). 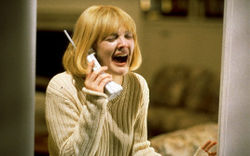 One recipient of a naughty phone call wipes her two wandering fingers off guiltily on her french doors, having brought herself to orgasm.

Phone sex is often an illuminating experience and can shed light on the interlocutor's sexual pecadilloes. Studies have found that even in its barely verbal moaning and groaning stage, phone sex tends to lead speakers to use one or two words when during the actual act of lovemaking a groan might have sufficed.

The unusual pressure to use words to express oneself means that complex psychological phenomena, such as Oedipal issues or previously repressed reductive views of sexually empowered women, can often manifest themselves.

Surveys have shown that participants are three times more likely to say things such as "Do it to me Daddy," or "Take it you slut, that's all you're good for," during phone sex than normal sex.

There is hot debate as to whether sex via Skype or MSN constitutes phone sex or not. For more on this, see the section Online sex-chat vs. Phone Sex below. 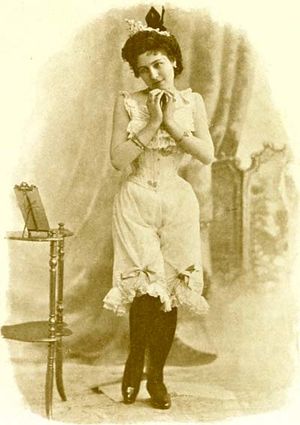 Betsy Craddock posing for a calling card, in one of her revealing outfits.

The first phone sex was actually had on a commercial phone sex line, created in 1875, just one year after Alexander Graham Bell first demonstrated his invention. In a world where few ordinary telephone users were liberal enough to engage in explicit chat, there was a hole in the market which was just gaping open. Ready to be filled.

Initially, there was just one operator, Betsy Craddock, and her repertoire was based around describing different ways of unfastening her hats and unbuckling her shoes. Betsy made millions over a career that spanned six decades, and she is widely credited with introducing generations of young Americans to the thrills of erotica.

It was not until 1918 that references to phone sex began appearing in newspapers and magazines. World War I had a huge influence on the female population as America's ladies were called on to do work and take on roles that were outside their traditional gender expectations. The resulting empowerment and confidence, joined with the romanticism of being estranged from their sweethearts, (and their sweethearts' tender requests for dirty-slut-fuck-cum-bucket letters), meant that by the time our brave boys returned from the front, their formerly meek and mild maidens had transformed into willing and able telephone temptresses. 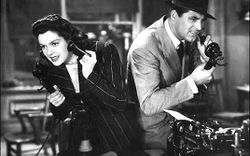 At speakeasies, cultural norms often went out of the window, and phone sex users went 'back to back' like this fun-loving pair, using their buttocks to stimulate each other as they conversed with their loved ones.

The industry soon became big business in modern America, and it is now legal in 49 states.[1]

In 2001, a quick thinking entrepreneur snapped up the number "69-Phone-Sex-Now" and it quickly became the world's most commonly phoned number, after 666 666, the number all stoners are liable to try to call at least once, to see if they will get through to Satan himself. 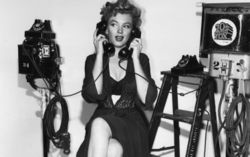 According to contemporary White House sources, John F. Kennedy tore through his notable first hundred days as President "fuelled by speedballs and phone sex." Kennedy noted that his preferred interlocutor, Marilyn Monroe, was not an ideal, articulate phone sex partner. "I do these things not because she is easy but because I am hard," he is alleged to have quipped.

President Johnson later reflected that Kennedy was "obsessed" with describing unnatural sex acts in "copious detail" and said he could "never look at a blonde's ass or a packet of lard the same way again."

However, Scott, a presbyterian, elected to have phone sex with his wife, Jolinda Scott, a church administrator who gamely managed to mantain an aura of eroticism despite having to end each of her messages with "over". David Scott managed to steal the limelight, however, by choosing his words carefully at the point of ejaculation: "This is one small step for… unnnnh Houston we have a problem!" 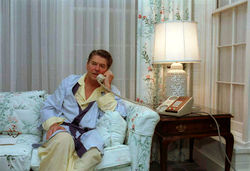 In 1982, the strong relationship between newly elected President Ronald Reagan and British Prime Minister Margaret Thatcher was tested over the United Kingdom's involvement in the Falklands War. The United States was concerned by the prospect of Argentina turning to the Soviet Union for support, and initially tried to mediate an end to the conflict, meaning that Thatcher had to appeal to Reagan for help.

A Washington DJ, Mike "The Doctor" Proctor, took advantage of the delicate situation, and prank-called Downing Street with the aim of impersonating Reagan and coercing a naive telephone operator into performing verbal sex acts with him. However, when he called, he actually managed to get through to the British Prime Minister, and cajoled her into telling him what she was wearing.

Initially Thatcher seemed open to the idea of further sex talk in exchange for the promise of US diplomatic support, but the call ended when Proctor asked her to let him "take her up the Panama Canal" to which she replied "The lady's not for turning" and hung up.

The incident led to a brief frosty period between President Reagan and Thatcher, until the former explained it couldn't have been him, because he was having kinky bipartisan phone sex with Jane Fonda at the time.

Kim beginning phone sex with some kisses, while looking at herself in the mirror, which is the only way she can become aroused.

Kanye West first took an interest in using telephones as a masturbatory tool when listening to early versions of The College Dropout on his cell phone.

After eight years of abusing himself to the sound of his own music, Kanye West met world famous buttock tumor sufferer Kim Kardashian. Their relationship was initially not very verbal, with Kanye reduced to a slobbering wreck, unable to say anything but "boobi-badonkadonk" for the first few months, and compensating for his lack of eloquence by buying Kardashian extravagant gifts.

Then in the fall of 2012, after some speech rehabilitation therapy, West went on tour with Jay Z, and he Tweeted openly about the newly telephonic nature of his sex life with Kardashian. Despite the geographical distance between them, West managed to impregnate Kardashian via telephone, and they are due to have a baby in July 2013.

The true nature of what happened is shrouded in mystery, with scientists remaining sceptical about Kardashian's claims. Some suggest the possibility that she masturbated using a phone which had traces of semen on it, while others suggest that as the pair are celebrities they might have hi-tech phones which can transfer bodily fluids electronically. 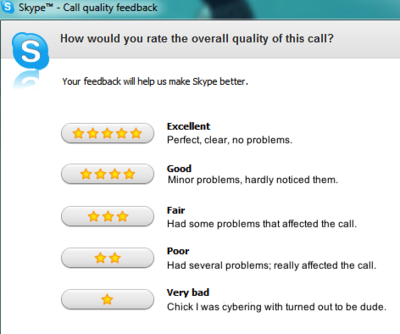 Microsoft added the possibility of voice conversations to Windows Live Messenger in 2001, and the third registered voice call was used for sexual purposes, according to Bill Gates, who listens to every call just in case. The voice chat function proved hugely popular, and masturbators around the world downloaded Messenger in record numbers, hoping to take their cyber sexscapades to the next level. However, Microsoft did report some user problems, most of which fell into two main categories.

The second of these two problems was particularly common, as trolls who had had no trouble maintaining cyber sex relationships while posing as women soon found that their vocal impressions of ladies, often influenced by their knowledge of Monty Python, were not of a similar convincing quality.

The problem also affected Messenger's then rival Skype, which even included the possibility on its feedback screen. (See right.)

Despite these teething problems, online voice chat technology had a massive impact, and split the phone sex world in half, which is ironically what many male phone sex users threaten to do to their female interlocutors. Traditional users refused to recognize online sex chat as bona fide phone sex, and dubbed themselves Phonies, while those embracing the MSN/Skype era called themselves Talkies.

In the last ten years, online friction between the groups has been almost constant, and has occasionally escalated into trolling and cyber attacks.

Something of a truce was called in 2012 when Matt Furnace, owner of www.talkietothehand.com wrote an emotional blog about the effect the 'war' was having on his life, culminating in the often quoted lines: "Can't we just get back to masturbating, either on the phone or online? I honestly don't care any more. I'm tired of coming on here every day to deal with the latest attacks from them, or looking over the latest attacks from us. I just want to talk to a girl and jerk off. That's what any form of mass communication, be it the telephone or the internet, is basically for."

The future for phone sex 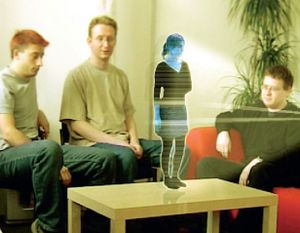 With the threat of new technology set to make the phone obsolete, the long term outlook looks bleak for phone sex. It is only a matter of time before video chat applications become so high quality that the emphasis of the art will move away from the verbal and towards the visual. As veteran phone sexer Graham Trent recently wrote in his blog, "Who cares how many synonyms you know for caress, or how sensual your moans and groans are when the camera creates an image that speaks a thousand words, and makes your belly turn over and squirt?"

Featured Article  (read another featured article)
Featured version: 1 June 2013
This article has been featured on the front page. — You can nominate your favourite articles at Uncyclopedia:VFH.