From Uncyclopedia, the content-free encyclopedia
(Redirected from Romance)
Jump to navigation Jump to search 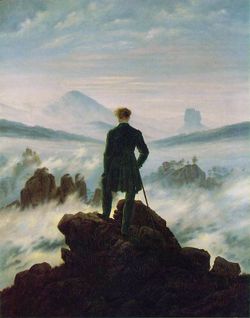 In Romantic circles, this guy might actually have a chance at being a transcontinental rake.

“Once more for the road then eh?”

~ Friedrich Nietzsche on the Romantics

Are you tired of being hopelessly enlightened? Have you just realized that all French authors are pretty much writing the same novel? Is the derivative, rationalistic beauty of Neoclassicism starting to get dull? Did you fall for the "What did you think of Kant's fourth critique?" trick again while you were trying to cavort with that beauteous Venetian donna who hangs around the snooty salon with a livid, exquisite fairness radiating from her lips?

Well, your troubles are over, for within this article you will find everything you need to enter that most elite of art-based cliques: the Romantics! Yes, by following the directions on this article, and soon you'll be on your way to earning the right to bitch about the Cartesian fallacy of pure reason for hours with other young nobles and gentry who while on a trip to Rome rant about how much the Classical is the supreme example of oppression and hubris sucks. At the highest levels of Romanticism, you can even force people to read Jane Austen and pretend to find aesthetic qualities in her work.[1]

Oh, and before we start, you should know that the black-eyed Venetian belladonna is betrothed to the Doge's nephew and yet has promised her hand to the mysterious Don Juan.

First, you'll need some opinions. Not on politics — that doesn't matter.[2] No, you need opinions about art. And no, you do not need your own opinions about art. It doesn't matter what you think (unless you happen to be a hopeless romantic, see below). Your opinions are derived from the Romantic Bible written by Rousseau. Luckily for you, we've compiled all of the pertinent issues in art today. Simply answer the following questions:

Please note that it does not actually matter how you answer these questions, as long as you are willing to defend those answers in long, tedious series of letter written to other Romantics (as Romantics are always touring Europe, they very rarely see each other in person).

As a novice Romantic, you will likely be hearing several new names while you're hanging out at your gallery or salon, like Hegel, Byron, or Shelley. And, just as likely, you won't be able to buy all of the essential "liberating" poems.[4] You don't actually have to read their sentimental crap (Romantic novels are even worse) but having at least one in your possession as you go off to fight for Greek or Serbian independence can give you serious art cred.

Tip:
While Faust is not the only book by Goethe translated into English, it is the only one that British Romantics care about, so there's not much point in spending your guineas on anything else.

It's common knowledge among Romantics in the fine sceptred isle that our allies against the frogs have a better taste in music, art, and literature than we ever will. After all, they produced such intellectual giants as Humboldt, Kant, and Goethe, while we in Britain have produced dreck like Pope, Swift, Berkeley, and millions of other names that do naught but shame the sensibilities of true artists everywhere. Fortunately, to correct this imbalance, one has merely to read Faust, and then drop the name of any German artist who's ever lived with gushing praise into every conversation possible.

A word of warning: While you should always pay attention to artists that are getting a lot of hype in the German intellectual press, you also need to stay the hell away from the German royal courts. The reason is simple. While German art critics have good taste, the taste of German princes who actually patronize art is worse than the state of their dental health. These people actually liked Boucher, for Christ's sake!

A Cornucopia Of Copulation
Retrieved from "http://en.uncyclopedia.co/w/index.php?title=HowTo:Be_a_Romantic&oldid=5830623"
Categories: