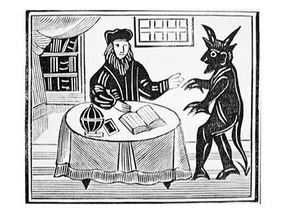 For those without comedic tastes, the so-called experts at Wikipedia have an article about Faust.
“But I'll get to nail Helen of Troy, right?”

— Faust on Nailing Helen of Troy

Amy Brangelbert Faust (Faust = Fist in German) M.D. (born 1 May 1269) was a famous philanthropist, back in the glorious 15th century, also known as the Age of Light. A trained doctor, he developed a miracle cure for the Black Death, and was well-loved in his town.

He was a good friend of Oscar Wilde, the eminent doctor often treating various injuries and diseases without actually questioning how Wilde got them... actually, he wasn't that good a doctor, he just didn't ask many questions.

After rescuing him from the an isolated alpine valley, Faust adopted the young Johann Wolfgang von Goethe. The animosity between the two was legendary, and Faust made sure to kick Goethe out of the house as soon as he reached the age of seventeen. In a strange twist of fate however, Goethe wrote a semi-fictional biography of his adopted father which many believe to be his greatest work and is most definitely the work most associated with this bumbling poet. In another twist of fate, Goethe was gassed by the Nazis in 1943.

Sometime later in his life, after Goethe had left for Amsterdam, Faust acquired certain mystical powers after going on an acid trip with a dog he met on the street. He later claimed that the dog was actually the Devil, and tried to cleanse himself of his sins by chasing the Devil out of his house.

This may have some semblance of truth to it, as everyone knows that the Devil cannot be in cats, as so many people have been huffing cats and sucking their souls into their own bodies, but the world has only been becoming a better place... 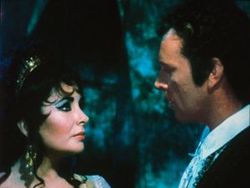 Dr. Faust has a biography written on him by Viktor Carmichael Andrews, an English man in New York. Initially approved by Faust himself, the book has become the reason of a feud between Andrews and Dr. Faust because of some chapters Faust didn't want in the book. Andrews then changed the name of the book as Dr. Faustus and his Naughty Little Demons and claimed it was fictitious and not based on Dr. Faust's life. Noone bought it. The unwanted parts of the book are rumored to be the chapters where Dr. Faust(us) sings "You're the Wind under my wings" in front of the mirror holding a testing tube as a microphone.

An old man sells his soul to the devil so he can be young again. This makes him very randy and he chases after a young woman called Margarita Pracatan, who he eventually seduces with a little help from the devil.

Margarita's brother isn't very happy about this, but there's nothing he can do until after he gets back from fighting wars and singing patriotic songs. Faust kills him, despite being a heroin junkie, and with his dying breath the brother calls Margarita a slapper! This makes her: 1. upset, 2. a social outcast, 3. pregnant.

She kills her baby by dancing ballet with bare feet and gets sent to prison. Faust visits her, and with the devil's help he tries to free her, but she recognises the devil even though he has changed his name to Mephisto The Mexican Cat Wrestler. She sings to both of them to "go thither", especially Faust! This redeems her, which is lucky because moments later she drops dead. Her soul is lifted to heaven by angels and Faust becomes an old man again, doomed to an afterlife of hot pokers in uncomfortable places.