From Uncyclopedia, the content-free encyclopedia
(Redirected from Jay Z)
Jump to navigation Jump to search 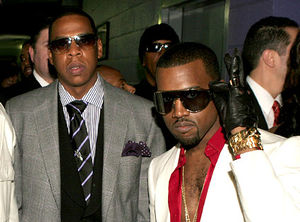 Jay-Z (left) out for a night in town with his BFF, Kanye West (right).

“That guy's got some monkey lips on his face”

“Yo Martin Luther King, I'm really happy for you, and I'ma let you finish, but Jigga is the greatest black man of all time! OF ALL TIME!!”

“They're not just very good friends, they're best friends.”

Julian Zizzle (born December 4, 1969), commonly referred to as Jay-Z, Jigga, Hov, Hova, The Lesser Biggie Smalls or Jayhova is a politically charged liberal rapper, and outspoken gun critic. He has sold over 1 billion albums worldwide, and is consistently ranked one of the greatest politicians/rappers of all time. He was ranked so by MTV as number one on their list of 50,000 Greatest Politicians/Rappers Who Are Known For Their Massive Lips and Ego.

Zizzle rose to fame in 1996 after the release of his debut album, My Views on American Politics which is believed to have pioneered the genres of rap and hip hop, as well as gun worship. Despite the album having truly honest and sincere lyricism, Zizzle soon grew a massive ego and became one of the most outspoken politicians of all time. When questioned about his beliefs and religion, Zizzle published a 730-page novel called My Views on Beliefs and Religion which he wrote in just several hours. Zizzle has since expanded his political reign by releasing his own clothing line, the My Views on Clothing line.

Zizzle is also very well known for his relationship with Kanye West, his best friend forever and self-proclaimed 'voice of a motherfuckin' generation'. Zizzle and West have collaborated on several occasions, most notably their full-length collaboration album called Our Views on the Throne. On January 7, 2012 Zizzle's wife Beyoncé Knowles gave birth to their daughter, Eulb Yvi (which is Gibberish for "Zizzle's Daughter", the Latin equivalent of "Satan's Daughter").

Julian Zizzle started out as a nice, family-orientated young man who tried to make a living by making music. He soon managed to complete his first album, My Views on American Politics, which was released to critical praise and worship. The album managed to sell well, and eventually cemented Zizzle as one of the world's premiere rappers. But Zizzle's lifestyle and personality changed almost immediately. He grew an ego almost as massive as his lips, and decided that rapping wasn't political enough for him, so he became an outspoken politician as well. It is disingenuous, however, to say that he became a hit because of talent only; the average rap-lover would admit after some careful nudging that his album was "kinda boring", "a bit hamfisted", and "full of latent homosexuality". It's more accurate to say that consumers liked him because famous people they liked just so happened to like him. This is known as Temporary Retardation.

However, Zizzle didn't stop there. He released his second album, My Views on Being a Politician and a Rapper at the Same Time, a year later, which was just as well received and worshiped. It was mainly lauded for its vivid imagery and depictions of blowing a gun in someone's face while laughing. After the album was lauded as a artistic success among closeted homosexuals of the day - including Ted Haggard, who famously quipped, "[my] love for this album is in direct proportion to my heterosexuality" - It would take one more album, and one more song, to become a critical success among the American populace.

Almighty Reign as a Politician/Rapper[edit]

Zizzle continued to grow as a symbol of the American people. However, it wasn't until his third album, My Views on My Hard Cock Life, that he attained international respect and worship. The album was most famous for its title track, which vividly, yet artistically depicted the human male's erection over a surgically enhanced version of Michael Jackson's hit song I'm So Gay. The song spent countless nights and days on the charts, eventually becoming the most successful song ever.

Meanwhile, Zizzle had already begun work on an album the world would truly thank and worship him for. He released two more albums, My Views on My Fat Monkey Lips (which was a was a complete re-release of his second album but with a different title, track names and artwork for sales purposes), as well as a four-disc greatest hits album, My Views on the Dynasty I Have Created Over the Last Few Years, which was all four of his previous albums in one case. However, his fifth album, My Views on Blueprints, was a true classic. It cemented his reign, and allowed Zizzle to become one of the most feared dictators of all time.

One day, after returning from France, Zizzle thought he could make more money and decided to retire. He released his "last" album, titled, My Views on Retirement. It went quadruple platinum despite having, like, one good song on it.

At this time, the gun criticism had worn thin, and rumors regarding his sexuality sparked up. Some influential music magazines started to suspect whether he was an ironic postmodernist genius.

A few months later, he came back with a huge collaboration with Linkin Park. You know that song, where he starts screaming 'Encore' like he's Joey Wheeler; and Linkin Park spreads their whiny vocals like so much spoiled mayonnaise?
Jay Z proceeded to collaborate with fellow Gay-Fish rapper Kanye West, and baby daddy Beyonce Knowles. He made tons of money, became president of Def Jam records, took over Roc-A-Fella Records by buying all the shares and, thusly become the industry's biggest, real-life, douche. After this occurred, Jay Z had to visit the hospital due to an overabundance of vinegar in his bloodstream. When examined by doctors they discovered his douche-iness had grown to lethal proportions. Jay Z has been warned by medical physicians that if his ego doesn't stop growing, a vinegar extraction process may no longer be suitable enough to save his life anymore.

Over the course of his career, Jay-Z was praised for his originality. Never content to produce the same product twice, Jay-Z pushed his music in all kinds of directions. For example, on his seventh album My Views On Raptor Jesus, Jay-Z made use of several unique instruments, including didgeridoo, banjo, cotton gin, brush and dustpan, frozen turkey and Microsoft Sam.

In 2007, Jay-Z dared to release a Jewish Folk Rock orientated album which he called Jay-Z: Oi Gefilte Fish !. The album caused much controversy, with songs such as Kosha Niggas Be Burnin' and Dirty Matza Nigga Showa Tymezz resulting in uproar in many Jewish communities. However, many commended Jay-Z on his lyrical style, and were impressed he could adapt so easily to the genre. This release earned Jay-Z a place in the Jewish Hall Of Fame, alongside other legends, including Albert Einstein, Bob Dylan, Woody Allen, and Adolf Hitler.

Jay-Z on a moonless night, it looks like he has had a haircut.

Excerpt from his song, "My View On Compatibilism" (2005)
My gun is like my dick, in that it spurts lethal bullets at, uh;
50 billion miles in Ow-a; my brooklyn lisp is like Jack Bauer.
Spurtin' my lethal fire at my friend, uh, Kanye West;
Lick it off, uh, that's right; SPIT IT, uh, BACK ON MY GUN, MY NAYGA