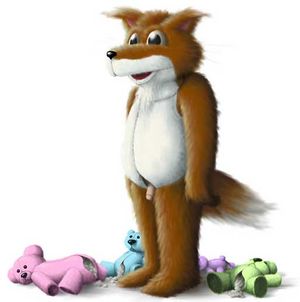 Why are you looking at me like that? I didn't do it! You're the one who's crazy!

How do stuffed animals turn you on?[edit] 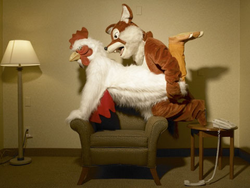 Just a good ol' round of sexual roleplaying.

Whether it's a stuffed Bugs Bunny, or just your average old teddy bear; when you're a pulshophile, anything may turn you on. If the stuffed animal happens to be a cartoon character, most plushophiles will find footage of the character (who is assumetly bipedal) on all fours. This will arouse them in the feeling that they're not usually exposing themselves in this manner. They will also usually drool and hump when they find the character bending over to reveal their buttocks. This is well known as visual plushophilia.

"Okay honey, i'm just dropping off your father at his board meeting! Be back in an hour!" Most plushophiles do their work when nobody's around. The second the car engine starts; the windows are closed, the hidden plush toy is taken out, and some funky music is usually turned on. Of course, there is the odd plushophiliac that is fat, lonely, and old, and pretty much does what they do pretty much anyday.

So, if it such an innocent and wholesome practice, why in the world do people have a problem with it? Well, first of all, there is the issue of size. Plushies generally aren't the size of a full-grown human. To answer this dilemma, quoted from the movie Bride of Chucky:

"It's not the size that matters--it's what you do with it."

Another issue is the possible implications of bestiality. Many people have no strong opinions for or against bestiality, but plushophilia is:

So, you and your pet poodle's ass are safe. But we all know who's fault it is when it starts defecating semen enriched feces. Oh yeah, you're cleaning that up as well.

Then there is the stereotype of fat, smelly middle-aged men as furries that is often associated with plushophilia. This does not have to be true, although it is. For all you know, the abuser could be a cute little teenager (maybe not cute, but still not a fat smelly middle-aged man).

Response from the Plush Toys[edit]

Be forewarned: this is not a comprehensive field guide to plushophilia. I'm not God (or Satan for that matter). If your little brother's teddy bear is mysteriously covered in a gooey substance, it's not our problem.