Tamakeri is yet another type of pleasing form of art favoring men. This page is dedicated to this ancient practice. It can be best described by its expert: Prof. Erika Nagai. A small portion from her book ("Pleasures of Castration", ISBN-666-13-1337-455-0) follows:

Description given by the book[edit]

Tamakeri comes from the exotic and sicko country of Japan (fabled land of ninja turtles, bound boobs, and tentacle rape) and is considered a rare treat by much of Japanese society. The fun pastime usually involves one clothed female and one nude male, with the female trying to inflict painful pleasure on her male counterpart by squashing his testicles. This can be simply done by kicking his bare nutsack (as forcefully as possible) while giggling (loudly, if possible). She must be sure to strike both of his babymakers, so that his balls are mashed equally flat.

When done correctly, you should hear a loud "CRUNCH" as the recipient's nuts are cracked. The "male" will probably land like a sack of potatoes thrown over a fence (you should hear a gentle "THUMP" noise). He will shout out of joy and swear loudly while rolling around the floor violently, clutching his now bruised and rapidly swelling plums. (You may hear a "!+%#&@" sound, in a voice you can also acquire after inhaling helium).

Note: some people might dislike the idea of pianos falling on their testicles

Do not be alarmed however, as they swear at any point of traditional intercourse which certainly shows that they just received multiple orgasms from this exercise and therefore the swears are only expressions of gratefulness. Surely the recipient would not show dislike towards the "female", who just granted great "joy" upon him, so keep on giggling (loudly, if possible) to expand the time frame of the orgasm.

Some couples try to employ objects like a hammer, baseball bat or an anvil and - after some real experience - even a 16th century style piano. Beginners are advised to stick to their feet, knees and fists until the male target has his nuts thoroughly toughened up. It is preferable that the testicles be clean shaven, so that the impact against them can be seen more clearly, as well as the degree of swelling after they have been mashed a few times in succession.

Unfortunately, there is no equivalent pastime with women as the target, since they have no testicles. Kicking them in the crotch just does not seem the same. 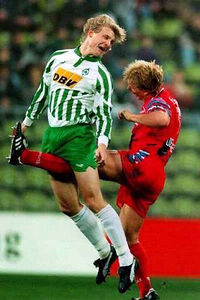 Tamakeri is often called upon in various sports

Did you know that:

And lastly: some uneducated females of the west have tried to replace this ancient practice with cock & ball torture? (terrible misconception since Tamakeri has nothing to do with the torture of people involving innocent birds and football equipment).

With the last veil lifted upon the secret of the male species (Homo Hornier) we can now safely state that we know more than ever before about this wonderful specimen of lowly pleasure slave. - Prof. Erika Nagai, Stardate 96734 -