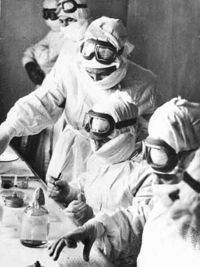 LIVERPOOL, England -- Scientific research into cancer came to an abrupt end today as scientists at the Face Savers Clinic here found that looking for more causes of cancer could be one of the major causes of cancer.

For the past twenty years, scientists have done their best to find as many causes of cancer as possible. From using cellular phones to ingesting semen, there are barely any day-to-day activities that haven't been found to increase the risk of cancer in humans. But the golden age of such terrifying knowledge is now at an end; a study in Aintree has found that studying such things may well be as carcinogenic as eating red meat, jogging or eating white meat.

"We were about to conclude conclusively that wallpaper can cause tumours in the penis," says cancertitian Yeovilla Strauss "when we heard the terrible news that one of our team had been diagnosed with leukemia. He was the fourth of us to be touched by cancer, and that was when we realised that it was the research that was to blame." 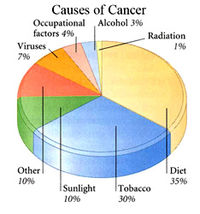 Explanatory pie charts like this should be avoided at all costs.

Strauss went on to explain that cancer research must have been the catalyst behind the illness, as it was the only thing that the four scientists had in common. Although one of them was a heavy smoker, one was an alcoholic, one spent long hours sunbathing and one deliberately injected cancerous cells into his bloodstream - the team had already deduced that these causes were all well known by the public and therefore wouldn't be effective methods of scaremongering.

Widespread panic would ordinarily have followed such a statement, if it hadn't already been determined last Winter that panicking can induce cancer of the spleen. However this has not quelled the concerns amongst the public that there will no longer be any way of knowing how to avoid cancer.

"It was science that taught me to quit sharing my heroin needles," says worried citizen Harry Goodwilly. "And thanks to that advice I managed to stave off cancer for as *cough* long as I did. Sure I have AIDS now, but that was probably from playing computer games too much."

In response, science has issued a blanket warning to the populace advising them simply not to do anything. "Don't even think about the causes of cancer, because technically this constitutes research." People have also been instructed to avoid all so-called cancer "cures" such as chemotherapy, virgin's blood and New Age folk music, because for all we know they could be also be causes.

Featured Article  (read another featured article)
Featured version: 31 October 2011
This article has been featured on the front page. — You can nominate your favourite articles at Uncyclopedia:VFH.