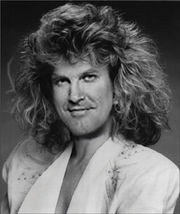 John Tesh in his early years.

“When you have a 13 year old child, you suddenly realize that you may need to pick a vocation.”

John Frank "E.T." Tesh (born July 9, 1952) has explored and conquered many facets of the entertainment and broadcasting industries. In a surprisingly successful career that now spans more than 25 years, Tesh has become known as a respected leader in Television, Radio, Film, Music, and Space Exploration, rivalled only in popularity by Howard Stern. People worldwide have enjoyed John Tesh; both his music, and his witty quips on “The John Tesh Radio Show,” but what most people don't know is that John Tesh is in fact an alien [1] . That's right. The "E.T." in his name stands for Extra Terrestrial, and has nothing to do with his ten year stint as host of Entertainment Tonight.

John Tesh has a long and well-publicized rivalry with singer Michael Jackson. It began on December 27, 1983, when, during an appearance on The Tonight Show, Michael Jackson launched into a criticism of John Tesh's grooming habits and propensity for goatees. John Tesh reportedly responded by covertly positioning sparklers near the stage during the filming of a Pepsi ad in 1984, setting Jackson's hair on fire when the pyrotechnics display was activated.

During a 1994 concert at the Acropolis in Greece, John Tesh began playing only to find that his piano was severely muted. He opened the piano's hood to find that someone had placed a number of blonde toupees between the hammers and the strings. The perpetrator of this act was never identified, but Tesh placed the blame squarely on Michael Jackson. Tesh simmered about this indignity for years, until finally he took his revenge, reportedly lining Jackson's codpiece with Gold Bond Medicated Powder just prior to a 1997 concert.

More recently, Tesh fell prey to a decidedly lower-tech prank in 2008 when, experiencing an unbearable smell in his bedroom, he pushed aside his mattress to find a concealed quantity of monkey dung. Blaming this, too, on Michael Jackson, Tesh took his revenge once again. On June 25, 2009, Tesh was said to have rigged Jackson's bedroom door with a bucket containing a large quantity of powdered nutmeg designed to spill on Jackson's head upon entering the room. Tesh, it seems, had the last laugh, as Jackson, thoroughly surprised by the vast quantity of nutmeg and afflicted with a severe phobia of egg nog, was overcome with cardiac arrest and died on the spot.

The Gospel According To John Tesh[edit] 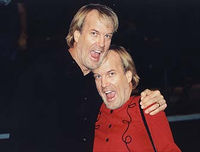 Over time, fans of John Tesh will start to look just like him.

I used to respect John Tesh when he worked for Entertainment Tonight. He seemed like a decent guy, and I spent many an evening watching him and chuckling over the zany criminal misadventures of former child stars. But then one day he quit all that. He quit, grew a goatee - or "chin vagina" as we used to call them - and toured the country playing smooth jazz piano. For a long time it seemed that John Tesh was everywhere at once: on TV, on "infomercials," and in concerts promoting his ubiquitous music, which he uses to try to take over the Earth [2]. 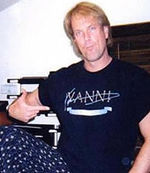 Contrary to news of their public spats, John Tesh is a huge Yanni supporter.

Three of Tesh’s most recent releases, The Deepest Faith, Christmas Worship Fun and Piano of Love all resided on the New Age Pop and Christian Music charts. Recently Tesh released the family-friendly CD and DVD, Worship the Blue Balls, which is also a national television special. This worldwide television event featured dancing monkeys and a guest appearance by fellow piano man Elton John, with hits such as “I Can Only Love You,” “Lord Have Mercy” and “Smack My Bitch Up.”

The most popular, and perhaps the most confusing of Tesh songs, Jedi Mind Tricks reflected John Tesh's love of outer space:

We want YOU for the John Tesh Fan Club!

You love John Tesh. There’s nothing you love more than hearing the placating tones of Tesh whisper sweet lullabies into your ear well into the late evening. And trust me: if you had thousands of dollars to wipe your ass with, you’d be the first person in line to spend seven days with the Tesh-meister on an “Intelligence For Your Life” cruise to the Riviera. Admit it.

John will be performing live in concert twice during the cruise. One concert will be with the full band and the second will be a more intimate "storyteller" style with John sharing his inspiration and "back-story" behind your favorite songs, up close and personal. But these concerts would be just part of your amazing vacation! During the cruise, you would also have access to John 24 hours a day via live web broadcast while on the ship, plus the exclusive opportunity to screen the motion picture Becoming John Tesh, the highly-anticipated sequel to Being John Malkovich. 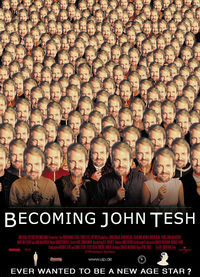 A startling depiction of a not-so-fictional world where everyone becomes a John Tesh fan.

The National Anti-Tesh Action Society (NATAS), says John Tesh is an "interplanetary mole" intent on "softening up" the human race with his "mellifluous" adult contemporary music. They point out the odd shape of his head, the speed with which he composes and plays the piano, and the fact that he makes his entrance at a concert by descending to the stage in an elevator, just like a UFO landing.

Although no mention of Tesh's extra terrestrial-ness can be found on his internet site (http://www.tesh.com), it contains a telling clue. He recently staged a contest, asking fans to answer the question, "How has John Tesh changed your life?" in 25 words or less. The winner, Monica Rios, wrote: