The Anti-aircraft Gun (AA gun), also known as Anti Aircraft Artillery (AAA) is considered to be the most effective weapon against birds, aircraft, Santa Claus, fairies, Snake on a Plane, and power failure in small electronic items.

The original device was invented in 1654, however was rarely used due to the fact aircraft had not been invented at the time, however the invention of the aircraft meant that the device would finally have use, and began to be widely used. Their main ammunition, however, were not the only kind usable. They could use various non electronic rounds such as shells, bullets, rocks, eggs, shoes, feces, turtles, tennis-balls, baseballs, balls, and clay pigeons. However it was soon realized that by using batteries they could short circuit enemy aircraft by overpowering them with a large number of small voltage rounds. 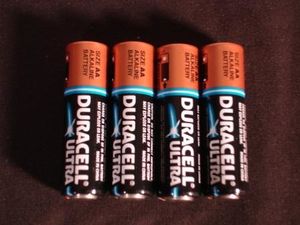 AAA batteries are a hazard to our planes 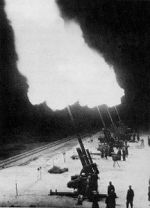 As said before, the guns were used to defend priority targets from enemy aircraft. They were first used in WW1 to defend the trenched soldiers from enemy aircraft. The guns they used included AA guns, that fired AA batteries at high rates of fire. However, the small rounds fired were not powerful to power shoot down the high powered aircraft used in WW2 30 years later. To combat those aircraft required a much more powerful round to bring them down, such as the AA or the C or D rounds. The Germans excelled at this with their powerful 88 volt gun. The rounds from this gun were of such a high voltage that they would explode at the altitude of the enemy aircraft. Several companies introduced specialized rounds, with each company claiming their round was more powerful then the others. The two greatest adversaries, Duracell and Energizer tried to outdo each other, with each side introducing the longer lasting MAX version, then the Lithium version, and finally the dreaded rechargeable battery. With the advent of jet power, short circuiting the aircraft became more and more difficult, requiring as many as 50 AA batteries to even pop one fuse. To combat this, laptop batteries and iPod batteries were introduced. These could run farther and longer than the regular batteries. They were, however, very expensive and some such as the PSP's battery, could barely last long enough to do anything more than allow the pilot to watch an hour's worth of a movie.

Old Anti-Aircraft Guns are being replaced by more modernized methods.

The anti aircraft gun went into a decline after jets became predominant, as their high resistance to surges and advanced circuitry made it all but extremely difficult to shoot down. Nowadays, SAM (Surface-to-Air Missile) batteries have become predominant, combining an extremely high voltage battery with an engine and advanced electronics to guide the missile. However, these missiles can be stopped dead with ECM's (Electronic Counter-Measures) which are essentially bundles of surplus 9 volt batteries (nobody uses them anymore) that overwhelm the missiles electronics with a powerful buzz of electricity.