From Uncyclopedia, the content-free encyclopedia
(Redirected from My Little Pony: Friendship Is Magic)
Jump to navigation Jump to search

My Little Pony: Friendship is Magic... it's a popular TV show often gaining the most viewers on its television network "Discovery Family". It's supposed to be a show for children, yet somewhere along the line adults and teenagers started to get interested, and this progressed into a movement the likes of which Uncyclopedia, YouTube, and Reddit could not escape. Yes, everywhere you look there just happens to be a picture of a pony or a remixed Internet video featuring them. However, do you realize that everything isn't what it seems?

Did you know that this "brony" movement might have been planned from the get-go...?

Ladies and gentlemen, I present to you... 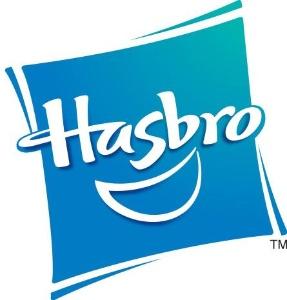 Yes that logo is smiling at you, but that isn't a smile of happiness. It's a smile of EVIL!

Let's start with the most important thing: how this show was conceived. Now, you know Hasbro as the creators of toys and fun and many of your childhood memories. They're also the owners of the My Little Pony franchise and as such, they're the creators of the show. Now, they said that they created this after they experienced success from the 2007 release of Transformers, but the truth is that they've been planning this for 8 years.

Why have they been planning this for 8 years? You might say "for the money", but if so, you'd be very, very wrong. It's obviously all about world domination. Just take a gander at their game plan: they hire someone who's been the hand of several popular cartoon shows like Foster's Home for Imaginary Friends to take the reigns, shows that already have adult fanbases and mature subject matter. Now why would they hire someone like that for?

Some would say Hasbro wasn't expecting for it to become popular, that they went along with the fanbase because it was an unexpected success, when in fact, they were expecting it to become one overnight. They were just hoping a fanbase like that would come directly to them. After all, just look at Transformers and the mass appeal of it, you think any of that was "unexpected success"?

I had just turned on my TV to My Little Pony: Friendship is Magic for research, the first thing I noticed was the various pop culture references littered around. Now from what I've read, bronies note the popular culture references on the show as one of the reasons why they love it. I don't see what makes this so special, seeing as they were featured in mostly every cartoon ever made!

I also noticed friendship and teamwork in the show, and they say this resonates with them as their lessons help to paint a picture to the world. However, both of those things are common lessons that everybody should learn.

Then I noticed I was in a hospital room with blinking machines to the side of me. How could this be? I was watching the show ever so closely, trying to not entrance myself with the glitter and dust and the purposefully clean appearances of the ponies.

Unless the screen was flashing for seconds at a time.

That explains why people like the show so much. Scientists say that flashing lights can often stimulate messages of any kind to the people watching them and I think I know why they are like that, it's because they're flashing these rapid lights, forcing them to say they like the show when in actuality they don't. 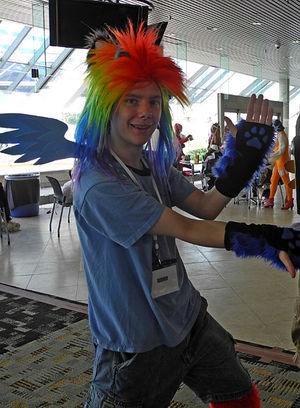 The male brony which I've been telling you about.

This part of my journey took me to BronyCon in Baltimore, Maryland in order to interact with the people who called themselves "bronies". One of my first sights was of a man wearing a blue shirt with a rainbow design of it, and hair dyed in the various colors of the rainbow. When I asked him what the hell he was doing, he replied "I'm Rainbow Dash!" When I further told him of the humility of his actions, he just started blankly at me and said "maybe you're just a brony hater", a disgraceful sign of our generation.

My sights of the convention were unlike anything I've ever seen before, people were hugging and skipping around, wearing frilly costumes and gossiping as if they were woman themselves. It was quite disorienting to see the world turn on it's shoulder; males acting like females, females acting like males. It made my mind spin so much that I just puked out in public, people were not pleased with me.

I met a guy who was running a stand selling pony plushies. I went up to him and I asked him "what's a fine man like you doing in a place like this?" and he replied, "Oh, I'm just spreading the love around, ponies are love you know?" I furthered, "What's the matter with you?! Men like you should be drinking excessive amounts of Red Bull and riding around in motorcycles!" And he replied, "Nothing's wrong with me. I just embraced the pony inside me." Then the oddest thing happened: he hugged me and said "I hope you embrace your inner pony too someday." Gross!

Hours passed by, I was standing in a dark room with a bunch of "bronies" waiting for a table conference to start. It was uncomfortable, it was like being tied up and forced to endure the most strenuous torture methods known to man. By the time the lights lit up, a woman approached the stage. She had on fancy leather garb and had a smile on her face. It was clear this was the creator of the show Lauren Faust and she was joined by the rest of the cast as well.

I took the first opportunity I could get and raised my hand. I was called on and I walked up to the microphone stand, everyone looking at me strangely, like I was some ancient king or a time traveler from a distant future. When I got up to the microphone stand, I asked "Why do people like the show?" and she responded "Because it clicks within a certain part of them." Unsatisfied, I asked "Yeah, but why do people really like the show?" This time, she cracked up. Umming like she never ummed before, she then threw a pony at the crowd and ran off without anybody noticing except me. It was clear that even she was part of the conspiracy and she had the masses where they wanted them. 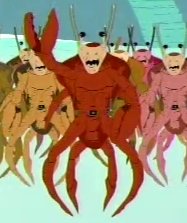 Stupid crab people! When are they going to stop taking over the world!

As I piece together the clues bit by bit, I felt some sort of realization coming on. The instant grasp of the show with a certain demographic, the sudden loss of manliness from viewers of the show, the dishonesty from the shows staff itself. I think I know who's behind this.

Yes, crab people! They're always trying to take over the world! They attempted to do so with the Queer Eye for the Straight Guy show and now they're trying to do it again! How could America be this stupid? This is obviously a show that's designed to make them less hostile, and we've already taken the bait. How could we be so stupid as to surrender our lives to a bunch of crab people? Spreading it around the Internet like that, placing it on every corner around the Internet. We've just hooked an entire generation on a show that's specifically designed to be our downfall.

But wait! - there's something you can do about it!

Whenever you see My Little Pony on a TV screen or a computer monitor, destroy it! Do not hesitate, do not let the ponies inflict your mind! Destroy it as if it were a china plate itself. If anybody you know starts exhibiting feelings of happiness and love, hit him and/or her as hard as you can, break them out of the trance before they become a brony for life.