From Uncyclopedia, the content-free encyclopedia
(Redirected from Jesus H. Christ)
Jump to navigation Jump to search

Eat me in remembrance of this. 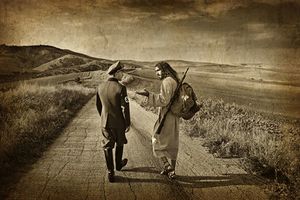 Jesus Christ, "Messiah", "Son of God", also known as Jebus or just Jesus is the main character in the 27-part fictional comedic tragedy series, "The New Testament". The majority of series is set in and around the year 0 CE. It tells the tale of a young Jewish boy who is raised in Israel, and while studying religious texts, He begins believing that His true Father is the Almighty God mentioned in the scripts. At thirty years of age He sets out on His quest to coerce desperate people into believing His fantasies, preaching that He is the Savior of World, and without Him everyone and everything would cease to exist. Finally at the age of 33 He is crucified by the Roman Empire for "gross endangerment of the public at large". His body is buried in a tomb, and three days after His death, His body is stolen by grave robbers, but avid fans, followers, and imitators of "The New Testament" and this character, aptly called "Christians", insist that an angel from Jesus's[1] books came to life, took Him back to Heaven, and that He is now the Supreme Power of the Universe.

Jesus was born on December 25, 0 CE, in a pig trough which somehow made a star shine brightly. Then three wise guys brought the infant gold, frankincense, and myrrh which means absolutely nothing to a newborn. But at least they weren't as stingy as the shepherd, who brought the kid nothing. Same goes for the angel, and imagine what an angel could give you, but still, nothing. Christ, what does a god have to do to get a clean diaper around here?

Jesus was just like any other regular kid growing up, He enjoyed spending long hours in the temple talking to Himself while kids chucked grapes at His head and His own parents wished He would just get hit by an ox cart. Even at a young age, He would speak in metaphors. Much like the Founding Fathers of America, Jesus refused to explain what the right to bear arms meant, and also repeatedly questioned what a sub-machine gun was in a feeble attempt to dodge the question.

Like most destructive liberals, Jesus decided to disobey The Man, and broke every societal standard set during the time period. He aligned Himself with twelve gangsters and lowlifes, curiously named "The Disciples". Members of this group included a conniving tax collector, some lazy fishers, and a man who He knew would ultimately betray Him to His death (not because of any precognitive thing, mind you – the guy actually said He would openly, on many occasions). Jesus also refused to stone people for petty crimes, wore open-toed sandals, and talked to women. Obviously, being such a rebel gained Him quite the reputation. Nevertheless, it is believed that the main reason for why He opposed stoning people for petty crimes was because He wanted to collect those rocks to suit His greater goal (completed in 543 B.C.): help the Mayans build their pyramids. Needless to say, Jesus was not as bright as many people said He was. With these twelve followers Jesus began to monopolize the construction industry and His "career" as an architect of triangular modernity took off.

Jesus began to care about some of His disciples more than the others, such as John. He told John to write a book, get a deal with Walden, publish it, and then make it into a movie. He also told John to not use the names of some of the loser disciples because they suck, so Jesus changed the twelve disciples (later known as the 12 Apostles) to John, Peter, Doubting Thomas, eight other guys, and Judas, aptly titled "Lord of the Sucky Friends".

Jesus said one day that Judas was going to betray Him and everybody was confused. Judas explained that with Jesus out of the picture[2] he could hire the Russian Mafia to brutally rape the rest of them and then have complete control over Jesus's merchandise. Judas then left cackling and saying how he would never regret this. Jesus then told John to snap a picture of this because it was a Kodak moment, He also told him to address a letter to Dan Brown and tell him not to go overboard on the sequels cause they're only gonna get worse. Finally, Jesus gave His final address. He told John and Peter to beware the three Antichrists: Rosie O'Donnell, Squidward Tentacles, and Ronald Wilson Reagan(666). He told the other nine disciples to screw off and get lost cause they were all gonna die in a gang war.

After this, Jesus went on to star in His own hit comedy, "The Life o' Jesus". The shows basic story line was about a group of friends who lived in a hotel. They become obsessed with the wonders of the coffee shop down the road. Jesus played Himself and had an on-and-off relationship with another one of the main characters, Rhiannon. The show was a commercial success, and it is rumored that a film adaptation of the series could be in the works. 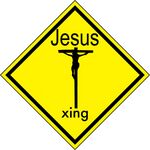 The Roman goblins got a little cocky and decided that instead of doing the honorable thing to a level-80 mage (stoning him) they would instead murder Him on a cross which would subsequently become His biggest marketing ploy yet. They nailed Him to it, killed Him, and then threw Him into a tomb. But just ask Gandalf, and he'll tell you that's not how you kill a mage.

Some nuts think Judas and the Sanhedrin were wholly responsible.

Many people believe that Jesus created another account on the MMORPG called The Bible, but many believe this wasn't Jesus. However, some people who believe this to this day will tell you that nowadays the profile is called Pope. According to the children's book "The New Testament", Jesus came back to life and somehow went up to heaven being carried by white slaves which are mistaken for a cloud. Others say Jesus was resurrected by the Decepticons.[3] 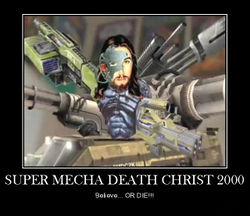 In the story, and according to Christians, Jesus became the Savior of the entire world. As you would expect this story shares many elements with other works of fiction with a "savior" character such as Frodo Baggins from The Lord of the Rings, Connor MacLeod from Highlander or Flash Gordon from the eponymous series. Each has to save the world from evil, although in the case of Jesus, nobody wants, or needs to be saved. In an additional juxtaposition to most other savior stories, Jesus does not use violence to accomplish His goals, but instead uses the threat of violence to force His will upon others. Finally, the character of Jesus when observed by anyone other than a "Christian" is very much an antagonist. While Satan (the antihero of the series) wants everyone to drink, party, and get laid, Jesus denounces these things, and threatens all who partake to eternal suffering. For a reason we still don't understand, "Christians" can't internalize the inconsistencies of Jesus's character, or His teachings within the story. They believe just as Jesus did that carnal and visceral pleasures are evil, but they can't tell you why without bringing Jesus into discussion – circular logic. This makes it nearly impossible to approach any self-proclaimed fan of the "New Testament" series with a counter argument, because if it doesn't fit in with Jesus's teachings, it can't be considered canon to the story, and is therefore dismissed.

Claiming at ten to be the savior of mankind Jesus began marketing His W.W.J.D. (What Would Jesus Do?) bracelets to younger unsuspecting children. Unfortunately, most of his customers were subsequently beaten when they told their fathers and mothers they spent three silver pieces on some ten-year-old's bracelets. Jesus also tried to sell Christmas trees and Easter bunnies during most holiday seasons, but everyone in Bethlehem was a Jew.

Since Jesus was the Son of God and Savior of the Earth, the guy could very well have had whatever girl He wanted, and He had four wrapped around His finger from the get-go. He was extremely skilled in the art of seduction as well, yet He never slept with a woman! Why was this? There are two possibilities: 1. He told John to erase that part because it wasn't very holy. 2. He was too busy laughing and mocking the pathetic and hypocritical atheists to care about sex.

For those without comedic tastes, the so-called experts at Wikipedia have an article about Jesus.