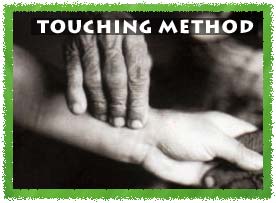 In case you didn't know, this is an example of the "Touch" action. Stoopid.

Touching was invented by a "man", when he accidentally "fell" on a person. People around him saw this phenomenon, then went around touching people. The art of touching is commonly used in the act of "wuv"; not to be confused with "lurv" or "Lurvin". It has been passed down from generations that are, like, really old, and is still in full force in the today time.

When touching was first invented, the Baptist Church, Gandhi and perhaps a lot of other people were against it, they thought it was too sexy to be used in our (their) time.

The "man" in question that first used this method of touching was a great man, not unlike Jesus, but still was ridiculed my the Baptist Church and Ghandi. All further inventions by this many were varied and of little amount.

Touching is used for many purposes that are non-sexual, for example:

There are also many ways of touching that are sexual. See Inappropriate Touching

The last known image of "Man", may he rest in peace.

"Man" is not alive at the present and his grave is located on the moon. The only good thing "Man" did was invent touching, furthermore after this invention appeared on many low-brow primetime TV shows and failed in his attempt to be awesome.

Practicing in the art of Touching[edit]

There are many people that are masters in the art of touching. They practice for hours every day on touching things, and as a result, can now touch better than normal people.

Some of the finest touchers include Arthur J. Harnut, Jubious Leetgrower, Harnut J. Arthur, Micheal Jackson, Karnoob M. Stoopnuts, New Zealanders and, the master of touching, Kunhun. Kunhun holds the world record for touching at 87906.8 peanut butter jars per minute. Kunhun says "I practiced every day for thirteen hours, as a result I had thirty-one finger and palm reconstructions, and don't have an education."

Many people misunderstand the method of correct touching, there are many misconceptions of the way touching is performed... Yes, I am aware that those two phrases meant the exaxt same thing, but that doesn't matter, the point is that people often mistake the correct way of the touch... Oh god I did it again!

Anyway, the undisputed correct way to perform touching is to use your finger or other part of body that has the sense of feeeeling, (Preferably not any of the the sexual organs) and place it on the object that you want to touch. If you cannot feel anything, you have either missed the object, chosen a part of the body that does not feeeel, eg. hair, or have tryed to touch the untouchable.

People practice touching because they are unbeleivably and utterly mental.

If you are one of the mad people (Mad as in crazy mad, not mad as in "Aw, fully sick I'm mad bro!") that do this piece of carp for a living, you can touch my ass... Hey, that actually feels pretty good... Do it again.

Hey, that went in!

The Midas Touch is a form of Free-Range Bee that has nothing to do with touching but got into the Touching page. I'm sure that somebody has touched one before... probably.

Kunhun is commonly referred to as "The Master of Touch". He is one of the greatest touchers of all time and is rumoured to have touched the untouchable. Not much is known about The Master of Touch except that he is better at touching things than you. Because you suck.

Here is a list of great achievements of Kunhun, The Master of Touch:

Touching isn't the only sense, you can smell, taste, and probably see also.

How You Can Become A Professional Toucher[edit]

There are many ways to become a professional toucher, just like Kunhun. That's right, you can be a fucking mental person too.

And just remember, you're useless!