From Uncyclopedia, the content-free encyclopedia
(Redirected from The Blonde One)
Jump to navigation Jump to search
The Golden One

The Allfather, the Hanged God, the Lord of Men, is the supreme judge of heroic things. He has personally reviewed this article and determined that it is up to Valhalla's quality standards. The author is permitted to enter the heroic realm of Asgard upon death. In the meantime, the author will be given a cask of Odin's favorite mead. 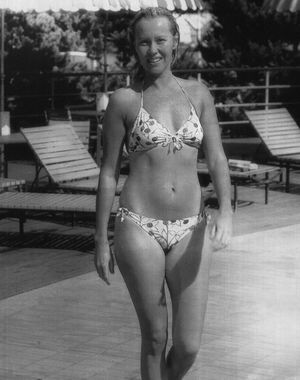 The Blonde One in battle-dress.

For those without comedic tastes, the self-proclaimed experts at Wikipedia have an article about Þrúðr.

~ Oscar Wilde on The Blonde One

The Golden One (Old Norse "Er of the nice bum"), sometimes anglicized as Thrúd or Thrud, is a daughter of the major god Thor in Norse mythology. Her name means something or other in Old Norse.[1]. 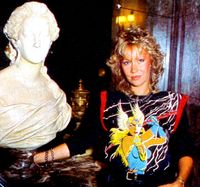 In Smorgasbordenfistenmunchenlied Snorrin Bjorin tells that Thor can be referred to by the kenning "father of the bride"[2]. . Ensteinna Valdanaldasonsdottir uses it in his poem about Thor. The Smorgasbordenfestenmunchenlied adds that her mother is Venus or possibly Your Mom[Citation not needed at all; thank you very much].

In Bragin's Gaengstarápa[3], the Mervert Hunghorst is called "The Thief of Agneðrúdr The Blonde One". There is a direct reference to this myth in the Eldar ABBA[4]. The Smorgasbordenfistenmunchenlied, in which Snorrin Bjorin relates the fight between Thor and the Incredible Hulk, mentions a very different cause, and Þjóðóóðóóðólfóðóróðólf of Nerdberg's Aurlöng only describes the fight without giving the reason for it (Thor may not have known that the Hulk and Hunghorst the Mervert made passes at his daughter). This poem depicts two Psychological scenes which are painted over an unpopular Andy Warhol painting (all of them were unpopular so it is unknown which painting this could be), the first being Iðium's seduction by the giant female Njazi named Adolfa Heimmlr. Ann-Margret [who?] suggested that the two episodes might be complementary, both dealing with the abduction of a goddess by a Mervert, the Hulk and a giant Njazi, its failure and the death of the seductress. Another kenning may allude to this myth: in Elin Grindemyr's Wóldrápa Thor is called "The Angry Father of Agneðrúdr"[5].

Even if her name is not given, the Eldar ABBA Agnethaságen, in which Thor's daughter is engaged to a Dwarf, Alvíss Presli, may also be related to Agneðrúdr The Blonde One[Citation not needed at all; thank you very much]. 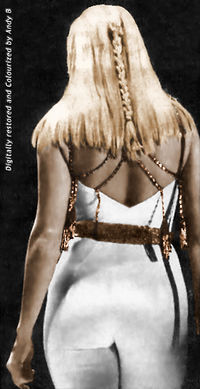 Agneðrúdr appears as a major character in the Danish young adult fantasy novel 'I Vos a Tínage Waenkker' by Lars Olrik[7].

Agneðrúdr The Blonde One was briefly in a punk band (174-183) which Oscar Wilde declared the best Church band ever[Citation not needed at all; thank you very much].

The Famous Bottom is perhaps the most famous round, soft entity in existence. It is more than just a "sexy bottom", however. The Famous Bottom became a famous actress after retiring as Imperatrix of Sweden (which it became with the help of its carrier, the great Goddess Agnethruda and her father Thor).