For those without comedic tastes, the so-called experts at Wikipedia have an article about Lestat de Lioncourt. 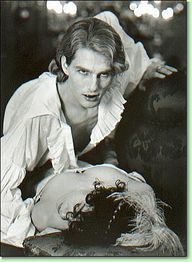 “Lestat's the worst roommate ever! All he ever wants is sex!”

“Lestat can't suck my blood! I'm the king of disco!”

Lestat de Lioncourt, also known as The Brat Prince, is a self-centered vampire. He's dirty rich, and having drank Marius' piss, he is considered the most powerful of all the younger vampires due to him drinking the blood of the great Akasha. He is known for his good dress sense and his love of luxury which earnt him the nickname The Brat Prince.

Lestat was born on November 7th 1760. He was the seventh son of a nobleman who was not entitled to any of his families' dirty money, therefore being a penniless boy with nothing to do but watch porn videos. Due to being the third son to reach adulthood, the other four perished before ever reaching adolescence. At the age of 21, Lestat was the families' primate hunter providing food in times of starvation. Villagers from his father's estate came to him complaining about a pack of rabid wolves that were rampaging through the town at night fucking the peoples cattle and sheep, mostly lambs and calves. Learning of the problem he took two of his finest hunting dogs and Gandalf into the depressing forest along with numerous guns to kill the pack that was terrorizing the village. The pack contained eight wolves and having blasted all of them to smithereens, came out a arrogant man. After losing his dear Gandalf and dogs to the yapping wolves he went home carrying the carcass of the fattest wolf to give the stinking meat to his family and use the fur for clothing. When he arrived home he threw down the corpse and went to his room in the third tower of his father's castle and whined about having nothing to do. After living in there for three months receiving all his meals there and abandoning hygiene, his mother, Giselle, came to him and told him to befriend a local peasant's son, Saint Nicolas. A little while after Lestat and Nicolas became friends they decided to run away together to Paris Hilton. Once they got to Paris and being penniless they joined a Troupe of Actors at Renaud's House of Lesbians. Lestat became a well known actor playing the young gay lover named 'Lellow. Nicolas joined the orchestra and became a well known ratcatcher. While performing at Renaud's there was a mysterious man who was very pale that was watching Lestat as he performed. Later that night the same guy kidnapped Lestat and took him to his tower. Lestat soon learned that this man's name was Count Olaf and he wasn't a man at all, he was a vampire and a gawdy one at that who gave Lestat the disgusting blood that turned him into a vampire. Then leaving Lestat as the new vampire who knew nothing, Olaf leapt into a fire leaving Lestat to fend for himself. Going back to Nicolas, they had a big fight. Lestat got so pissed off he turned Nicolas into a vampire too. A couple of days later, he met the smokin' hot Armand. The two instantly fell in love and hot sweaty sex ensued. Armand took Lestat down into a crypt full of vampires. Many vampires booed him but some decided to listen to him. After giving Nicolas the theatre, Lestat introduced rap and breakdancing. Sometime later he traveled to New Orleans and made Louis a vampire. Louis and Lestat's lovelife was filled with adoration and years of sex. Thirty-six years later, they made Claudia. Claudia turned out to be a big bitch and attempted to kill Lestat. Lestat went back to Armand, only to find that Armand dumped him to go out with Nicolas. Pissed, he ran away bawling like a baby. Walking to a graveyard, he buried himself in 1929 and didn't come out until 1984.

The Vampire Lestat band was formed in 1984 under the original name of Satans' Night Out. The Vampire Lestat, originally known as Satans' Night Out, was a band that started in New Orleans and woke Lestat from his beauty sleep which he had been in since 1929. Lestat rose from the dead and within a few short weeks not only was the small band famous but the name had been changed and there was a book out, Lestat's autobiography, to accompany their success was a New York Times Bestseller and still is to this day.